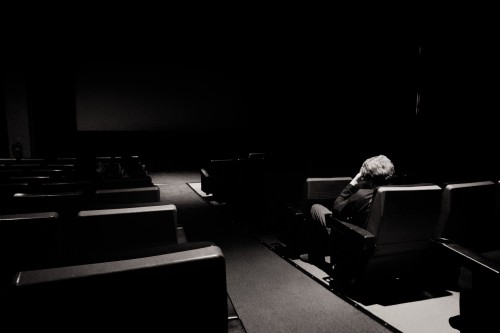 I actually really enjoy being inside old theatres and cinemas. There’s something about the way they used to present entertainment that has somehow gotten lost in the modernisation of the world. It’s not just the way they used to look, but also it’s the size. I like the small venues. A lot of people find them quaint, and well, I’m no exception. It would be really cool to go around photographing them. In particular, the ones that haven’t changed for many decades. There is actually one right here in my town, Palace Cinema. It’s so small, I’ve often thought it to be nothing but a fire hazard. I’ve been told it’s quite an experience, and well worth a visit. I’m sure I’ll go one day.

One of the most memorable small cinema experiences I had was in Boston, where the the floor was actually flat and the entire seat is mounted tilting backwards, so that it’s easier to see the screen over the heads in front of you. Anyway, I’d love to take more photographs of the interior’s of small theatres and cinemas. They have character, I suppose, is what I’m trying to say.

I was lucky enough to find myself in a small theatre in London recently and managed to take a few photographs without getting thrown out. Always a minor achievement (I’m joking, I’ve never been thrown out of anything. Section 44’s are another story).

I took this photograph with my Leica D-Lux 4 (of course). This is the RAW file conversion to a TIFF. I often use the Capture One 5 PRO’s “Soft image sharpening 2” preset, but for this image I wanted a smoother look, so I applied none. I then used Silver Efex Pro. I pulled the Structure right down to -98% and boosted the shadows a little. I shot this with a high ISO: 1600, so after applying the Kodak 100 TMAX Pro film type, I bumped the Grain Per Pixel up full to 500 and set it to Soft, just to minimise the usual graining effect you get with film caused by luminance noise, because there’s plenty already from shooting with a high ISO. For toning I used Copper Tone Preset 10 with all the default settings, no changes there. As you can probably tell, it’s a very light toner. There is also a slight vignette of -21%. I thought I’d include the Silver Efex Pro preset I created while processing this image. You can download it on my blog and then go wild!