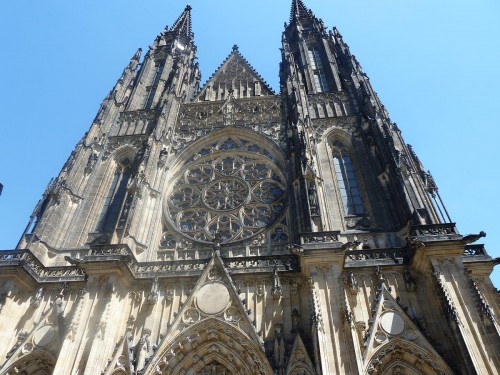 Answer to “Where am I?”: St Vitus’s Cathedral in Prague Castle, The Czech Republic

Greetings from the Penthouse Suite of the Kempinski Hotel, seven floors above street level in Prague, the capital city of The Czech Republic.

Before you ask, my job is host of Inside Luxury Travel. Over the past decade, I have travelled the world presenting this television show that focuses on high end travel. While I have a film crew following me around, I have always tried to document my travels using a “point & click” camera – to varied success. The ones I have used in the past struggled with details, landscapes and subtle texture & color. I recently took charge of a Leica V-Lux 20 and I am hoping that it will improve the photographs that I post here and on Inside Luxury Travel’s “Daily Diary.”

This filming trip to Prague is our first official outing.

So far I have discovered the Leica functions brilliantly in low light (for a compact camera), has a very fast start-up time, has a huge 3 inch viewing screen, records 720p hi-definition video and offers GPS which means I always know where I took the photograph! I am not sure how I have managed a decade without it!

Prague – a brief history.  The Prague Castle was built in 880 AD and between the ninth and fourteen centuries, 4 cities sprouted up around it. They merged to form the city of Prague in the eighteenth century. Through marriage in the sixteenth century the city became part of the Habsburg Empire (Germany) which lasted until 1918. Czechoslovakia was formed by the merger of Czech & neighbouring Slovakia. This lasted until the Nazi occupation of the country started in World War 2. In 1948, Communists took over until the Velvet Revolution of 1989. In 1993, Slovakia broke away and the Czech Republic was created.

There is a population of just over 1 million people in the city – which is a UNESCO heritage site. Prague attracts over 3 million tourists a year and its currency is the Coruna or Crown.

I am having a tremendous time here. I leave the Kempinski tomorrow and move into the Four Seasons. With all the history on offer, there is much to see. The most important sites are Prague Castle and The Charles Bridge – the only stone bridge over the River Vlatva in the city. King Charles IVth started building on 9th July 1357 at 0531 hrs. He loved numbers and if you write it out: 1-3-5-7-9-7-5-3-1.

There’s the State Opera House, the National Theatre,  and the tram service.  One fabulous activity is visiting a “beer spa”! It’s a unique and somewhat boozy affair but it actually works – beer is medically proven to be good for you!

Czech cuisine is not much to write home about. It’s all dumplings, duck, pork & chicken … and pizza! The only Michelin starred restaurant Allegro is in the Four Seasons hotel.

Summer has started here and the sun is bright and it’s wonderfully hot!

The week ahead will see me playing golf, more sight-seeing, tasting Czech fine wines, cooking with the Executive Chef at Allegro – Andrea Accordi and visiting a brewery…stay tuned for more of what’s to come!