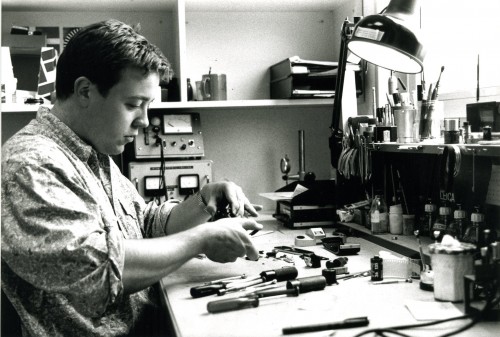 Stefan Daniel is the consummate people person, projecting an engaging combination of charm, disarming candor, and underlying toughness. He earned his present position as Division Manager, Product Management at Leica Camera AG the hard way—by rising through the ranks. Starting as a raw apprentice in precision mechanics, he moved on to become a trusted mentor in the repair department, and finally into a key role he describes as “a corporate entrepreneur, the best job in the company.”  It is an unlikely career trajectory that could only have happened at Leica, and it says as much about the passion that energizes those who work for Leica and motivates Leica fans in general as it does about the man himself.

It all started when Stefan was only 12 years old. “I had an older cousin who was about 25,” Daniel recalls. “She was a graduate in biophysics, an expert on nutrition, and a serious photo enthusiast who took great pictures with her Leica. In fact her boyfriend worked at Leica, and he still does! Anyway, when I first held a Leica in my hands I was instantly hooked by its precision, feel, and mechanical perfection. I knew it was something very special, something extraordinary and inspirational. I was simply captivated by it. Of course I couldn’t afford a Leica of my own, but I borrowed a Pentax K1000 and was assured that the best way to learn photography was to start with a fully manual camera. I soon joined a local camera club, learned how to develop and print black and white film and got good feedback on my pictures—but I never forgot that first experience of handling and shooting with a Leica.”

“At age 16 in Germany you have to choose between two academic paths—essentially trade school or college,” explains Daniel. “That was in 1984 and I decided to sign on with Leitz, Wetzlar as an apprentice in precision mechanics. To say that we learned everything from the ground up is literally true. I began by filing square angles into metal, and making the surfaces as smooth as possible. In a direct visceral way this gave us a feel for the materials, a respect for precision, and pride of workmanship that has had a profound effect on everything I’ve done subsequently. You are trained in skills so you have a tactile sense of precision—even today I can judge the amount of play in the focusing helical of a lens, and have a innate understanding of some of the challenges we face on the production end.”

“The apprenticeship lasted for about 3-1/2 years,” Daniel continues, “and we learned to master many basic processes including turning and milling on a lathe, riveting, soldering, and welding. Toward the end of my apprenticeship I was asked which department I would like to work in—for example prototype manufacturing, technical services, etc. I chose the repair department because I wanted to be directly involved with the cameras that were my passion. A master technician taught me how to repair the Leica CL, and during the course of my 7-1/2-year stint I repaired over 450 Leica R3 SLRs. Even more important, I learned that Leica users are just as demanding and passionate as we are. It’s a lesson that has been invaluable in my present role at the intersection of product development and answering the needs and wishes of Leica customers who are our best teachers and guides for the future. The fact that I began with a file in my hand where the rubber meets the road is what enables me to do my job effectively today, and I am immensely proud of the heritage and noble legacy I am helping to carry forth.”

In the next installment, Stefan Daniel will relate how he graduated from the repairing cameras to managing repair facilities, streamlining the slide projector division, and was groomed for a pivotal executive position at Leica.