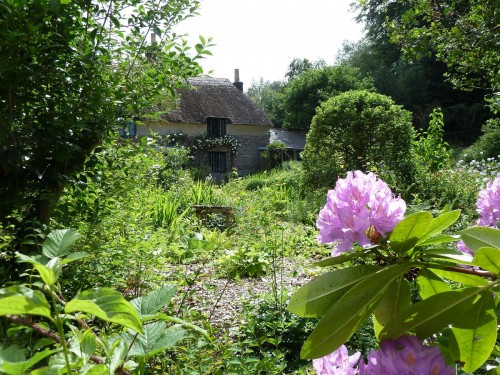 Answer to “Where am I?”: Thomas Hardy’s Cottage, Higher Bockhampton, Dorset, England

Greetings from Dorset, the most beautiful county in England.

Thomas Hardy (1840 – 1928) was one of the country’s most famous authors and he was born in this thatched cottage. He lived in Higher Bockhampton until he was 34 years old and penned arguably his most famous work: Far From the Madding Crowd from there. When he died, he was buried in Poet’s Corner in Westminster Abbey, London but his heart was removed and was laid to rest with his first wife, Emma, in Stinsford parish churchyard … in his beloved Dorset.

Hardy was an architect by trade and in 1893 he helped design Summer Lodge (now a superb luxury country house hotel) which is set in the village of Evershot. The village appeared in another of his seminal novels – Tess of the d’Urbervilles. For those movie-buffs among you, you would recognize Summer Lodge as Emma (another Hardy novel) – starring Gwyneth Paltrow and Ewan McGregor – was filmed there in 1996.

The market town of Dorchester is the “capital” of Hardy’s fictitious county of Wessex (in his books he renamed it Casterbridge). It is relatively small but contains a Michelin-starred restaurant and Poundbury, a “new town” which was constructed by the Duchy of Cornwall – which is owned by Prince Charles.

My V-Lux 20 and I have become firm friends now. I have yet to venture into manual territory, opting instead for “automatic” mode. I have experimented with moving objects (airplanes taking off), brightly coloured flowers and wide shots, with varying success. The Leica manages to capture colour in a way that I have never seen before in a compact camera. It also tracks movement very well and next week I am going to try more “people” shots to see how that pans out.

We are taking a three week break from filming but, of course, I will still be traveling. I wonder where I will be this week … ?