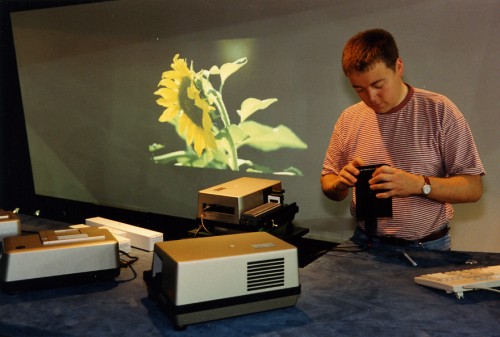 While Stefan Daniel was mechanically inclined and highly adept at repairing Leica M and R cameras, lenses,enlargers, and projectors it was becoming clear to him that his career was destined to expand well beyond the repair department. At a certain point he was also required by German law to perform military or civil service and he opted for the latter. As Daniel wryly puts it, “I left the predictably pleasant confines of the Leica repair department, which had moved from Wetzlar to Solms in 1988, and spent 1-1/2 fun-filled years on the North Coast of Germany maintaining a large civil service building. My duties were a cross between those of a superintendant and a janitor, and my mechanical training sure came in handy.”

“When I returned home to Solms I made it clear that I didn’t want to stay in repairs forever,” Daniel recalls. “Fortunately I was given the opportunity to use my expertise in other useful modalities, namely teaching and managing. The Leica subsidiary in France needed to train a staff of technicians in repairing all the Leica products I was already thoroughly familiar with, and I was assigned to teach my French colleagues everything I knew and basically oversee the program. I had to learn French of course, and eventually spent three years in France. By the end of 1998 it was evident that the management at Leica had other plans for me as well. I began attending marketing events where I had considerable contact and dialog with customers, sales people, and dealers, and since I am essentially a people person I thoroughly enjoyed honing my communications skills. At one point my boss inadvertently gave me a great compliment when he offhandedly mentioned ‘You could do sales.’”

“At the end of 1995 I got a call from Germany to come in for an interview,” remembers Daniel, “and I was elevated to the position of product manager for slide projectors, first at Solms and later at Braunschweig where the Zett projector factory was located. At that time Zett was a flourishing enterprise turning out about 40-50,000 projectors a year including Leica branded models. I remained there about 1-1/2 years and was instrumental in making the key decision to give up on Zett and concentrate on Leica projectors. It was kind of like triage because I had to decide which projectors would live or die. However it was a task that required me to integrate my knowledge base of marketing, hands-on experience from conducting slide shows, and technical knowledge. It is this mixture of technical skills, user skills, and marketing skills that became the operational paradigm that has defined my career.”

“While Leica’s straight-tray slide projectors were never market leaders in the U.S., which was ‘Kodak Carousel Country,’” observes Daniel, “they offered superb optical and mechanical quality and were very popular in Europe. A year after the merger with Zett we held a 30% market share in Europe, and sold about 55,000 units. It was a declining market to be sure but we maintained the business and kept it profitable for quite a while.”

“The highlight of my career up to that point came when I was called back to Solms and appointed product manager for Leica M cameras,” says Daniel with a twinkle in his eye. “I consider it the greatest honor and I still feel very proud to be able to contribute in some modest way to one of the great legacies in the history of photography and photographic technology. I served as Leica M product manager from 1999-2000 before assuming my present position as overall head of product management, including sport optics. Yes, there have been many management changes at Leica over the past several years, but one thing endures—the passion that motivates us to overcome seemingly insurmountable obstacles in pursuit of unsurpassed excellence. That is what our customers demand and we are steadfastly dedicated to living up to their dreams.”

In the next installment Stefan Daniel gives his candid reflections on the move from Wetzlar to Solms, how customer input drives product development, and how the M9 and X1 were designed and put on the market in record time.