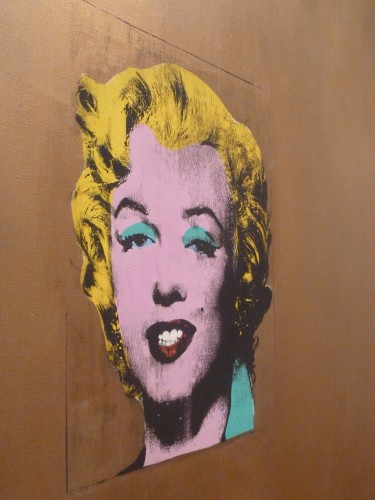 Answer to “Where am I?”: MoMA (The Museum of Modern Art), New York standing in front of Warhol’s “Gold Marilyn Monroe”.


Greetings from New York … aka The Big Apple, The City that Never Sleeps, Empire City, Gotham, The Concrete Jungle and home of The Ghostbusters!

I am a frequent visitor to New York as it’s the airline hub for much of my east coast US travels and home to some of the finest hotels in the world, that all need reviewing.

I dislike flying. As far as I am concerned it’s a necessary evil. But since taking hold of my Leica, I have started to appreciate the view out of my window. Wings, engines, clouds, sky, sea, land, the Sun, stars and the Moon have all taken on a new role in my photographic life. Through the camera lens I see things that my eyes have missed … the “smile” on Mr Moon, the texture of clouds, the relationship of the wing and its engines … next time you fly, take some random shots out of your window and you will see what I mean.

Out of the five boroughs that make up New York, I have spent all my time in Manhattan.

It was “discovered” in 1609 by English explorer Henry Hudson (who had the river named after him). He worked for the Dutch East India Company. The name Manhattan is derived from the Lenape Indian word “Manna-hata” or “island of many hills”. In 1626 the Indians sold Manhattan to the Dutch for 60 guilder … which is equivalent to just a few hundred dollars now. Not a bad price to pay for just 23 square miles of land! Who knew then that Manhattan would one day become arguably the “Centre of the World”?

Shopping & sightseeing included Tod’s, “The” Banana, Barney’s, my favourite fashion label Robert Graham, FAO Schwarz (awesome), the Bateaux- a wonderful dinner/dance river cruise and a very exciting helicopter flight around Manhattan which is a must-do on any trip to the city.

The favourite memory of this time in NYC – and the last thing I will think of as I nod off at 35,000 feet on the way back to London – will be SPiN.

“Picture” this, me playing ping-pong at 2 am in a 13,000 square foot table tennis club in central Manhattan (owned by actress Susan Sarandon).  There’s loud funky music, strong whisky, pretty waitresses and a couple of hundred happy smiley players batting small bright orange balls around. In the midst of the melee, however, I am being savagely taken apart by a fit, perky, pretty petite blonde girl – who I am sure learnt how to play ping-pong in a Chinese sports school!