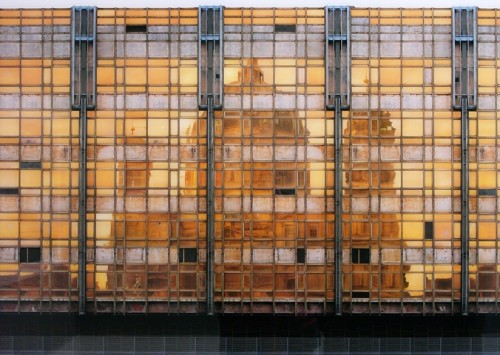 A dyed-in-the-wool Leica fan and a brilliant photographer, this serious enthusiast from Germany shoots like a pro!

To say that Karl Georg Wolf is a Leica fanatic is a bit of an understatement. He shoots exclusively with Leica cameras including an SL2, R7, R9, M2, M6, Digilux 2 and a shiny new M9, and his Leica optical arsenal is equally prodigious, consisting of the following lenses: R 16mm, R 21-35mm, R (PC) 28mm, R 28- 70mm, R 35-70mm, R 90mm, R 70- 180 mm, M 16-18-21mm, M 24mm, M 28mm, M 35mm, M50 mm and M 75 mm. Whew! A professional architect, he started out by shooting building sites, but has expanded his repertoire to include cityscapes, landscapes, documentary, and travel photography. Wolf acquired his first Leica, an M4, back in 1969, with funds from his very first salary as an engineer. He’s been an active member of the Leica-historica society in Germany since 1993, and his powerfully straightforward images of the dilapidated Palace of the Republic in Berlin awaiting demolition received a first place award from that organization and was subsequently selected for publication in the ‘Leica User Form Book’. Here, in his own words are Wolf’s insightful views on photography, being a de-facto Leica collector, and how Leica has played a central role in his passion for photography.

Q: You have amassed quite a collection of Leica Rs and Ms. What types of photography do you find best suit SLRs and rangefinder cameras, and how does your new M9 fit into the equation?

A: It took me quite some years before I decided to try shooting with a Leica R SLR camera. From 1969 to
1990 I relied on my Leica M cameras, first an M4 then a CL, both stolen out of my car! The substitute was an M5 that was in time accompanied by an M4-P (1982) and an M6 (1987). Now it’s the M9 that I’ve been using with great satisfaction for a few months. I really like this new camera because it combines the traditional virtues of the Leica M rangefinder concept more effectively than the M8 with its limitations.

Over the years I had changed completely to the Leica R without giving up on the Leica M. I wanted to extend the range of my photographic possibilities and this strategy worked out splendidly. But now I’m concentrating more on the LEICA M again since there’s so much for me to learn in the digital field. But I still hold onto my Leica R gear—I can’t bear the thought of selling it, so I use it for the occasional film project. Once you start to appreciate the Leica it’s hard not to turn into a collector because whatever equipment you choose, be it by Leitz or Leica, you’re dealing with superbly manufactured products that have intrinsic value.

Q: Of the six M lenses you have in your optical arsenal which ones are your favorites, and which particular ones do you have as prime (single focal length) lenses—that is, what is the maximum aperture and version of each?

A: With the M9 I can now enjoy almost complete compatibility with the older M lenses—the camera blends in perfectly with the gear I already have on hand. A few weeks ago I decided to give the wide-angle Tri-Elmar a try because I noticed there was too much of a color shift with my 15 and 12 mm VC- lenses. With the 16-18-21 mm Leica lens, this is completely gone.

I’m an architect by profession and have to record construction processes of all kinds, and the Tri-Elmar- lens with its special viewfinder is perfect for me. Talking about favorite lenses, this new lens is one of them; another is an older Summicron-M (V4) 35 mm f/2 lens and a Summilux 75 mm f/1.4 that turned out to be overwhelming for portraiture with the M9. The 75 mm lens was made in Canada and belongs to the range of incredible lenses that were designed by the legendary Dr. Walter Mandler.

Q: You have been a Leica enthusiast for quite some time, having bought your first one, an M4, in 1969. Did that camera transform your approach to photography? And would you say that your background as an engineer played a role in your selecting it?

A: When I was a student, my history professor photographed a lot with his Leica on his excursions. The results he presented occasionally were so wonderful that I decided to go for a Leica myself, as soon as I could afford one. As an architect I’m trained to plan and build solid solutions that lead to reliable building—the epitome of a long-term investment. For me, a Leica fulfills exactly the same role in terms of photography.

Q: As a serious enthusiast you shoot for yourself rather than to earn a living, and evidently derive great personal satisfaction from visual self-expression, but do you have any general or particular aim or mission statement with regard to your documentary, travel, cityscape, and landscape photography?

A: My photography began as a kind of documentary photography in conjunction with my job. Later this turned into a passion because I always strive to produce the best possible photograph even with a “poor” subject, such as a building site. Yes, you can develop creative moments taking photos of a steel and concrete environment, and that’s exactly what I did in the seventies and the eighties—all my photos were black-and-white then. Later, starting in the early nineties, my photos were transformed into color, partly out of convenience and partly because it allowed me to substitute other activities for the endless hours I’d been spending in the darkroom.

In 1993 I became a member of Leica-Historica Germany, a collectors’ club dedicated to everything Leica. I was very lucky that I had a chance to meet a wonderful photographer a couple of times while I was there: Walther Benser. He had travelled the world for the Leitz factory and presented slideshows—a kind of ‘Leica vision’ aimed at teaching Leica novices to become better photographers.

Q: Judging by the few examples of your work I have seen, particularly the soon-to-be-demolished Palace of the Republic in Berlin, you are certainly an accomplished photographer. How did you develop your straightforward descriptive style or did it just come naturally to someone steeped in engineering and architecture?

A: There are several of my photographs to be found on the Leica-Historica website. I was lucky that a few of my contributions to the annual photo competitions over the years won first prizes, and I had a few second and third prizes as well. The Palace of the Republic (the photograph on p. 138 in the ‘Leica User Forum Book’) was also chosen as number 1 in the 2009 Leica-Historica competition.

Since I began my involvement with photography by doing documentary work I would call my style up until now documentary, but now that I’m close to retirement I would love to get more involved in conceptual photography. I’m pursuing this by searching for workshops.

Q: Underlying your literal approach to the world I can sense a deeply emotional aspect. Can you say something about that?

A: I guess anything creative has some emotional aspect to it and I can see some of this element in my best pictures when I look at them afterwards or others tell me their reactions. However, it’s not something I am really that much aware of at the time I take the shot. Of course, the idea of taking pictures is very important to me so you can say I have a deep emotional attachment to photography.

Q: How did you become involved in the ‘Leica User Forum Book’ project and have you done anything for it other than submit your photographs for consideration? And what was your reaction to having your image chosen for inclusion in the book and what are your feelings about participating in the Association for International Cancer Research charity program?

A: I learned about the book project via the Leica User Forum at the end of last year. I always wanted to see photographs of mine printed, so here was a chance. I was thrilled when I received the news that one of my three contributions was chosen for publication. The whole project was pretty well thought out and organized. I tip my hat to the people in charge. To combine it with a charity project directed toward the Association of International Cancer Research program I found absolutely wonderful.

Q: How do you see your photography, and your association with the Leica community evolving going forward?

A: I’m not sure the answer to this question should be in words. It would be better to present some photographs to show what kind of photos I appreciate at present and in which fields I would like to move further. I can’t really say anything definitive about the Leica community either.

It is quite a heterogeneous group of individuals all united by their deep appreciation for the Leica brand and the excellence it represents. I hope that Leica AG is committed to further advancing and fostering this unique appreciation and fellowship by providing a “digital solution” for the many enthusiasts who still have Leica-R cameras and accessories. Whatever happens I still feel proud and happy to belong to that unique community. For quite a while—indeed for nearly three decades during the film era, and now in the digital era with the M9—Leica has been something very special to many people, including me. I am eagerly looking forward to more ‘Leica good times’ to come.

This post is part of the special ‘Leica for AICR’ series. To purchase the ‘Leica User Forum Book’, please click here. Proceeds benefit the UK-based Association for International Cancer Research (AICR). Please visit our page on Facebook to enter the ‘Leica for AICR’ photo contest; this week’s theme is Architecture. Based on Leica’s Twitter initiative, Leica is donating €3,000 to AICR – thank you for making this possible!