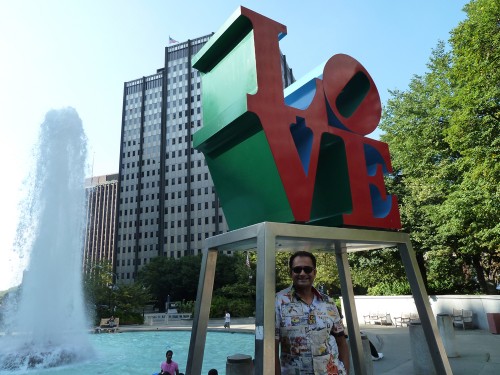 Answer to “Where am I?”:  The LOVE Park – Philadelphia

Officially known as JFK Plaza, the park was installed in 1965 having been designed by renowned architect Vincent Kling. It is situated across the street from City Hall. Artist Robert Indiana was an active member of the Pop Art movement and he was commissioned in 1976 to come up with a piece for the “City of Brotherly Love”  and this was it. The park itself is part of skateboarding folklore – with all the good & great of the sport including Tony Hawks acknowledging that the LOVE Park is one of the places to skate before you die.

After completing a filming assignment in Canada, I headed down to New York City for some meetings. I had a couple of spare days and on the toss of a coin, Philadelphia won out over Boston. I jumped on the “Business Express” and took a tooth-extraction-painful three hour train trip from Penn Station to the 30th Street Station – a distance of just under 80 kilometres!

After crossing the Delaware River, I was finally in Pennsylvania and The City of Brotherly Love.

Philadelphia was once the second largest city in the British Empire (after London and for a decade in the 18th century) and was once the capital city of the United States. The city was founded by British property developer William Penn in 1682 and was formerly home to the Lenape Indians and Swedish settlers.

Philadelphia was thrust into the international limelight when the Declaration of Independence was formulated (and eventually signed) there in 1776 … and the wheels were put in motion to formally eject the British from the United States.

Benjamin Franklin (arguably the city’s most famous son) was part of the committee that included Thomas Jefferson and John Adams that drafted the Declaration. It was finalised on July 8, 1776 and the Liberty Bell triumphantly rang out to the citizens of the city and indeed the United States to hear.

The city is certainly brimming with historical landmarks – The Liberty Bell, Independence Hall, Rodin Museum, City Hall and the United States Mint to name a few – but surrounding these sights are scenes a city wouldn’t want to capture in a postcard. It seems that the authorities have deigned to ignore the real issues on the streets and focus on spending money on a plethora of “visitor centres”. This aspect of the city had me heartbroken by the lack of “love” – brotherly or otherwise – that Philly boasts in its name as its clear to this outsider that there’s a lot of potential with this city beyond the tourist sites and if given the right attention, then the “love” surrounding these destinations will also filter down to the rest of the city.

Philly may be a diamond in the rough and I would genuinely advise it as a day-trip as its history merits that. If you do find yourself having to stay overnight, there is an excellent Four Seasons hotel!