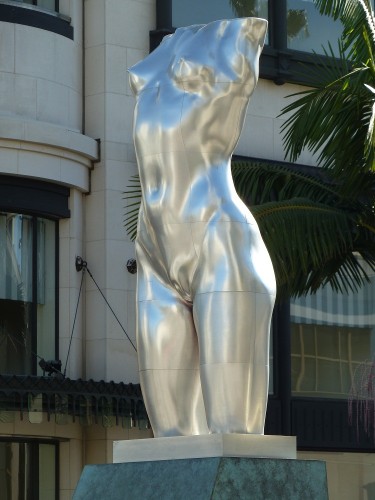 Answer to “Where am I?” : The City of Beverly Hills in California on Rodeo Drive.

This fantastic shining sculpture stands at the intersection of Rodeo and Dayton Way. The artist Robert Graham (1938 to 2008) was commissioned in 2003 to produce this fourteen feet aluminium “Torso”.

Graham first came to the world’s attention in 1984 when he designed the Olympic Gateway at The Memorial Coliseum for the Los Angeles summer games.

I am unashamedly stuck in the ’80s. My music collection is almost filled to the brim with the likes of Simple Minds, Scritti Politti and Talk Talk – while the movie collection is dominated by John Hughes offerings with Ferris Bueller’s Day Off and the Breakfast Club being two of my favourite films of all time.

Back in 1984 (yes, I AM that old) I remember watching Eddie Murphy (when he was cool) shooting up affluent areas of Los Angeles and specifically poking food into an exhaust pipe to evade some cops. Then in 1990 – when I had just relinquished my Flock of Seagulls haircut – I was dragged by a girlfriend to see a Julia Roberts movie in which she turns from prostitute to lady of means in ninety minutes by an obsessive Richard Gere. Both movies were of course set in Beverly Hills and both featured the Beverly Wilshire hotel.

The City of Beverly Hills is situated in Los Angeles. It was “founded” in October 1906, once featured a huge speedway track and was named after the Beverly Farms in Massachusetts.

It is undoubtedly the starriest place on Earth. With Hollywood, Bel Air and Santa Monica just around the corner, Beverly Hills attracts the rich and famous for shopping and fine dining. It is a convenient place for the Z-list to be spotted by the paparazzi.

I have now stayed in over five hundred luxury hotels around the world and one of my favourites, which I visit frequently, is the Beverly Wilshire. Now managed by Four Seasons, it has a legendary history and guest inventory.

The site the hotel is built on was originally the Beverly Hills Speedway. In 1928 an E-shaped luxury apartment block was erected at 9500 Wilshire Boulevard with the interior swathed in Tuscan stone and Carrara marble. It also featured an Olympic-sized swimming pool and tennis courts, since removed. In 1992 it finally blossomed into the luxury hotel that you see there now.

I have a favoured suite – 1001. Set on the 10th floor of the property you cannot access it by elevator. You have to inconveniently walk up there from the 8th floor! There is a good reason for this however – ultimate privacy. It is not sizeable at all. In fact, it’s one of the smallest you will find for the price (several thousand dollars a night), but it does have a magnificent 200 square foot outdoor terrace with panoramic views of Los Angeles.

For over fifteen years, the movie superstar/lothario Warren Beatty lived in this suite. If the walls could speak, can you imagine the stories they would tell?

Elvis Presley lived in the hotel for many years while he made some of the worst movies ever produced, but because of his patronage the hotel attracted the likes of John Lennon.

Beverly Hills is an excellent base for visitors to LA. From there it is a short drive to all the major tourist attractions, the beaches (I personally love Santa Monica and Venice) and is an ideal portal from which to explore the rest of California.

I have two Beverly Hills tips: 1) Galerie Michael on Rodeo Drive – the most amazing fine art shop in the world when you can view up-close (and purchase) original works by Dali, Picasso and Van Gogh. 2) Madame Chocolat on North Canon which offers some the of the yummiest, scrummiest and wonderfully indulgent candies on Earth.