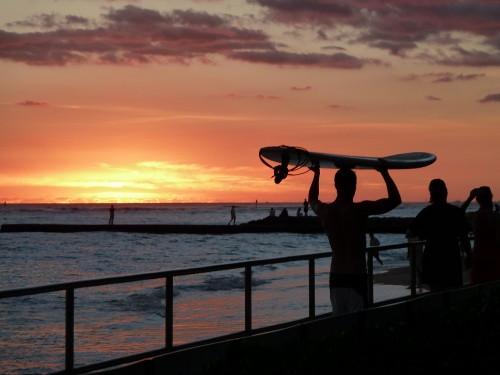 Answer to “Where am I?”: On Waikiki Beach in Honolulu, Hawaii on the island of O’ahu.

In the summer of 1977, Elvis Presley died. I vividly remember the scenes from Memphis, Tennessee where tens of thousands of people from all walks of life flocked to the King’s Palace, Graceland, to mourn the passing of one of the greatest entertainers that had ever lived.

At the time, I was definitely not a fan, preferring the soulful offerings of Marvin Gaye and Barry White, and was incensed that the cricket (a very English sport where a single game can last up to five days) coverage was postponed. In its place, every movie that Elvis had ever starred in was aired. Some of his ‘60s movies were outrageously bad, but for all the thorns, there was the occasional rose and “Blue Hawaii” was a bloomer.

Starring Joan Blackman, a young Angela Lansbury and of course Elvis, it was shot in 1961 – one of his three movies set in Hawaii (the others being “Girls! Girls! Girls!” in 1962 and “Paradise, Hawaiian Style” in 1965). The songs in Blue Hawaii are quite memorable, but what really made it for me were the pretty bikini-clad hula dancing girls on Waikiki Beach. Was that a myth or reality? Fast forward 23 years and it was time to find out.

Upon landing in Honolulu, I checked into Halekulani – arguably the most famous hotel in Hawaii. There has been a hotel on that site since 1907 and its name means “House Befitting Heaven”. I specifically requested a suite with a beach view so I could monitor everything that was going on.

On my very first night as I watched the sun set over the Pacific Ocean I spotted a single lady, dressed so elegantly in a bright red dress, dancing rhythmically to music from a group of ukulele players. It was true! Waikiki Beach is not only the most famous surfing venue in the world, but it is also a stage for Hawaiian dancing – Elvis style.

O’ahu, meaning “The Gathering Place,” is Hawaii’s third largest island. There are eight main islands and many, many smaller ones in Hawaii. It is the only island state in the USA.

It is home to Pearl Harbor, a very sombre and peaceful memorial. Hawaii’s  diversity, both in landscape and culture, has appeared on our screens in the likes of Hawaii Five-0, Jurassic Park and Magnum P.I. My highlight in O’ahu was a visit to the North Shore for a gliding trip around that part of the island. I have never had such a quiet and contemplative aircraft flight in my life.

My next stop was the second largest island – Maui and the affluent enclave Wailea. Here I stayed at the popular and reassuringly expensive Four Seasons resort. This island is so full of fun things to do. I took a ukulele lesson on Paia Beach, which has to be one of the most beautiful in the world, visited a lavender farm and hand-fed a Hee Hee Many (a giant ray) in the local aquarium.

All of the beautiful Hawaii panoramas and even extreme close-ups were captured on my V-Lux with so much ease.

As Elvis once sang, “Baby, you’re the BEST”.