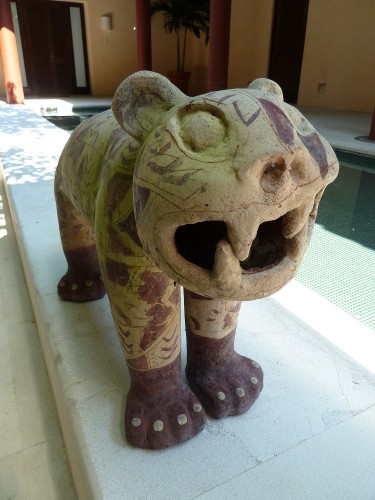 Answer to “Where am I?”: Mexico (on the east & west coasts of the Sea of Cortez)

The jaguar has fascinated the Mexican people since pre-historic times. The Mayas, Olmecs, Aztec and all the other peoples that have inhabited the land have attached great mythological and religious symbolism to this apex predator and the creature still remains a manifestation of the Mexican spirit with its noble form, powerful body, and indomitable spirit.

For the first five years of my life, my family owned a black & white television set. Watching snooker (a long and painful version of pool) was sheer comedy as, in hushed tones, the sports host would whisper something like “so, Jimmy is aiming for the red and surely will go for the pink next” when all I could see was one white ball and quite a few balls that were just several shades of grey! Snooker in the ‘70s was a hoot.

On my recent trip to Mexico I experimented with my V-Lux 20 – trying different scenes in both colour and black & white. The results were rather mixed. Some scenes only worked in colour like the brightly painted buildings of San Jose del Cabo, while some of the portrait photography worked stunningly in monochrome.

Mexico has always been on my bucket-list. I decided that my first visit to the country would not be too arduous. A dear friend from New York, upon hearing of my impending filming trip to the country, advised me that “if the tequila didn’t kill me, the water would!”

So my wimpish spirit of adventure took me to the east and west coasts of the Sea of Cortes and my first stop was Los Cabos, situated at the tip of Baja California Sur. I first headed to one of the finest resorts in the world – Las Ventanas Al Paraiso. I could have easily filled this entire blog entry with photos from Las Ventanas. Even my television cameraman says that of the three hundred properties he has filmed worldwide, this was by far the most photogenic.

My suite faced the sea and for every sunrise & sunset during my visit, I sat in my private swimming pool watching as the sky played host to a feast of colours. Vibrant reds, oranges and yellows appeared on the palette and occasionally were mixed to form breathtaking vistas.

This part of Baja California is desert-like. The intense heat penetrated my bones and I drank vast amounts of fluids to prevent dehydration. We visited one of Mexico’s most famous horse-riding schools and I was amazed by how the horses managed to walk, run and jump while not breaking into a sweat. We popped into a glass factory in Cabo San Lucas where I watched as local artisans turned recycled beer & wine bottles into champagne flutes and fine vases.

From there we flew over the Sea of Cortes to Puerta Vallarta on the western shore. It was then a forty-five minute drive to Punta Mita, situated on the Riviera Nayarit.

The Four Seasons resort is the height of luxury, but the climate was very different to Las Ventanas. It offers a tropical paradise including lush greenery and cool breezes.

On the Rivieira Nayarit, we filmed three once-in-a-lifetime experiences. The first was hole 3B on the Punta Mita Pacifico Golf Course. It’s a par-3 and you tee off over water onto, hopefully, an island green. The unique part is that to get to the green you have to take an amphibious vehicle through the sea! I played this hole at least four times, just because I could.

The second was a visit to Nuevo Vallarta. Here I was offered the chance to release some baby Olive Ridley turtles into the sea. These turtles were almost hunted to extinction and now are a protected species. They still need a hand to ensure that the babies hatch safely and at least make it into the sea. Only 2% of the 2 million released every year grow into adults. I prayed that of the two hundred I released all of them live a happy, prosperous life, despite the odds.

Finally, in the sea just off the resort, I swam with a fully grown ninety-kilogram female sea-lion named Jenny. She was rescued from a culling in Uruguay and now helps educate school children and hotel guests about the plight of sea-lions around the world.

My trip to Mexico was so short. I didn’t get to visit a Mayan Temple or a tequila factory, but not to worry, I am planning for my next visit already.