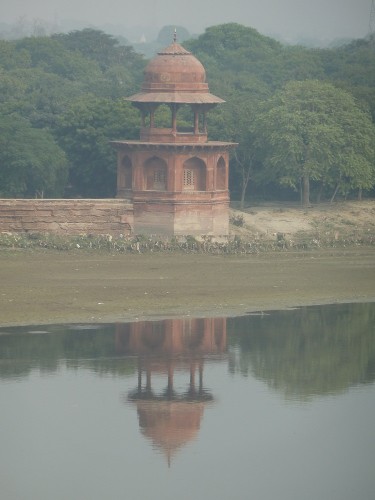 Answer to “Where am I?”: The Taj Mahal in Agra, India.

In my experience, cab drivers around the world have much in common; they believe that they are “kings of the road”, that they have four figure IQs and more general knowledge than Wiki. I remember a friend from New York remarking that cab drivers there mostly hail from India and not only do they drive like demons, they all seem to bellow loudly into cellphones that are surgically attached to their ears. Well, let me tell you, it must be in the blood because actually in India, taxi drivers to exactly the same.

My cab journey from the new Delhi airport to my hotel in the city was an experience. On arrival I was glad for seat-belts, for that extra travel insurance that I had taken out and that God must exist as I had arrived in one piece despite some maneuvers that defied the laws of the road and gravity.

India is the seventh largest country by area and second largest by population on Earth. Locals covering vast distances from city to city mainly travel by train and plane, but the only way to see India properly is by road.

I hired a strong, sturdy, well-insured 4×4 complete with bilingual driver and set off from the capital New Delhi to Deoprayag (aka Devprayag) – a journey on paper of 300 kilometres. In the UK, this car journey would take just a couple of hours, but in reality, in India, this road trip took nearly seven.  The journey from Delhi to Haridwar and Rishikesh (both highly important destinations in any Hindu pilgrimage) was straightforward and then things became rather hairy. Due to heavy monsoon rains, landslides and rock falls had turned a bad, barely single-track road into a treacherous pass. Picture this: huge overladen lorries driving at varying speeds with gay abandon up and down this “road” with sheer drops of hundreds of metres and no barriers. Shiver!

I arrived at Deoprayag a few years older, but no wiser.

Deoprayag means “divine confluence”. It is where the holy Alaknanda and Bhagirathi rivers meet to form the Ganges. Both rivers have very different colours and it’s very clear to see where they meet. People travel here from around the world to see this spectacle, to bathe in the river and to intern the ashes of their departed loved ones.

Take it from me, at just 620 metres above sea-level, the river water is freezing and fast-flowing. Much care must be taken when taking a dip.

From there I was driven to Agra, around 10 hours away. I was so exhausted by this stage that I slept most of the journey – we could have had several near-misses and I would not (thankfully) have known.

I arrived at my hotel in Agra in the middle of the night. I managed just a couple of hours of rest before daybreak. Amarvilas in the only luxury hotel in Agra that boasts views of the Taj Mahal from every room.

As the sun rose over Agra, the most beautiful manmade building in the world came into sight. My dear mother grew up in this city and saw this monument every day of her childhood. She never tired of the vista.

The hotel is just 500 metres from the front gates and a five-minute golf buggy ride later I was at the entrance. If you are Indian you pay the princely sum of 20 Rupees to enter (around 50 cents or 30 pence) for foreigners it is 750 Rupees ($16 or £10).

It’s then a short walk through lavish gardens to this magnificent marble tomb. It was built over a period of 17 years (1632 to 1648) by the Mughal Emperor Shah Jahan for his wife Mumtaz Mahal. They were deeply in love and on her deathbed she asked him to build her a monument that “is so beautiful that none other in the world will match it”. The Emperor used over 20,000 artisans from all over Asia and Europe to build the Taj cutting many of their hands off at the end of the build to ensure that they never repeated the feat.

The Taj was once decorated with rubies, diamonds and other precious metals and stones. These were stolen by the British during their occupation of the country.

The Shah was planning to build a replica for himself made entirely out of black marble on the other side of the Yamuna River, but this plan was thwarted by his ambitious son who ousted him from power. On his death Shah Jahan was interned next to his wife.

As I left the Taj that day, I realized that like that of a dear departed family member, the memories of this amazing visit to India would remain in my heart forever.