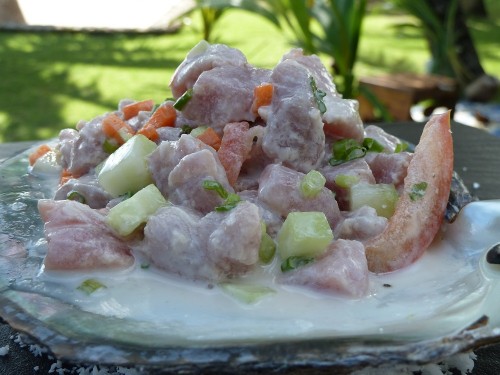 Answer to “Where am I?”: French Polynesia, known also as Tahiti and her Islands.

Congratulations to everyone who answered correctly on the blog, Facebook and Twitter: Ray, Dirk, Terence, May, John and Erica.

The dish is called “poisson cru” or Tahitian salad. I was taught how to prepare poisson cru by a highly-talented young chef, Pierre Maitre, at The Four Seasons Resort in Bora Bora.

Cube the fish and soak for a couple of minutes in saltwater. Chop onions, parsley, tomatoes and chives. Add lime juice, salt & pepper and soak. Add fish and mix thoroughly. Then add coconut milk. Serve on an oyster shell (for that authentic look!) and devour immediately.

The dish is similar to ceviche but is eaten quickly after lime juice is added so the fish stays “uncooked” and raw in the middle.

There are around 120 islands in French Polynesia (situated in five archipelagoes) that sit in four million square kilometres of sea, approximately the size of Europe.

The first European to see the islands was the Portugese explorer Magellan in 1521. In 1803 the King of Tahiti was deposed and in 1842, Tahiti and Tahuata were declared a French protectorate allowing Catholic missionaries to work unimpeded.

Papeete was founded in 1843 and the name “French Polynesia” was adopted in 1957. Although French citizens, the people of the islands have much say in how they are run; the fact is, Paris is over 16000 kilometres away!

If you think of paradise islands, Bora Bora and indeed the rest of French Polynesia fits the bill.

I was worried about this filming trip. I was worried that there would not be enough to see & do to fit a one-hour television show. Yes there are pretty vistas, sea colours that cover every wavelength in the spectrum of “blue” and resorts with white fine sand beaches, but would Tahiti and her islands be anything more than a honeymoon – albeit fantastic – destination?

Vanilla. You can find vanilla in Madagascar but the Tahitian stuff is pure gold. There are three grades … the best is used in cooking and the rest for spa products, body creams etc.

Pearls. Mostly cultivated pearls here as the hit rate compared to natural pearls is infinitely better. The quality is superb … and the prices get quite steep too!

Diving/snorkelling. As the seawater temperature is quite acceptable, the islands are an ideal location for enthusiasts and beginners alike to scuba or helmet dive to see the wonderful fish, sea mammals and flora on offer. I gambolled with rays and sharks (safe ones!) whilst marvelling at the magnificence of some of the Christmas tree corals.

Cruising. I have always hated the idea of being stuck on a boat, however luxurious, and sailing on the cruel seas, but I thoroughly enjoyed my inter-island sailing experience. The ocean was my private swimming pool and the ability to move freely from Tahaa and Raiatea to Bora Bora was marvellous.

Culture. The word “tattoo” is Polynesian and the artists here are incredible. The local food is delicious, but for me fire-dancing is a unique experience.

Yes, so much to do, but it has to be said that sitting on a beach, in the hot sunshine, sipping whisky and smoking a good cigar is really the best thing to do in French Polynesia. It’s the best tonic for jet lag you know!