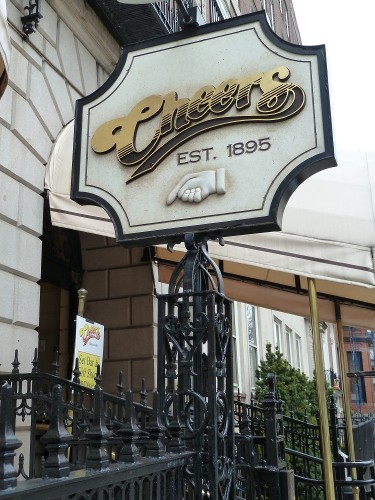 Answer to “Where am I?”: Boston, Massachusetts

“Cheers” was one of America’s most highly-rated comedy shows. It premiered in 1982 and ran for eleven years. Although filmed in Los Angeles, “Cheers” was set in Boston. Renamed “Cheers Beacon Hill” in 2002, the pub, which was founded in 1969, was originally named the Bull & Finch. It’s open for business and yes, I did partake in a jar or two of the local brew, Samuel Adams, but sadly no one at “Cheers” knew my name.

My favourite television character is Dr. Frasier Crane. His dry wit and sense of humour, his obvious lack of success with the fairer sex, his pomposity and his supposed knowledge of all things refined made every one of the 264 episodes filmed a delight to watch.

Looking back at his life though, I think that arguably one of his biggest mistakes was to abandon Boston and relocate to his hometown of Seattle.

My favourite time of year to visit the east coast of the United States is just after Fall (Autumn) and just before winter. So at the beginning of this month I flew into Boston to start what was a truly memorable visit.

Boston is the largest city in Massachusetts and is also the state capital. The city was founded on September 17th, 1630 making it one of the oldest cities in America.

Although originally inhabited by Native Americans, strict Puritanical Christians emigrated to “New” England and named Boston after the English city that is located in the county of Lincolnshire. In the 1770’s, the British Government tried to raise taxes in New England to untenable levels and this led to the American Revolution. Even those who know little about American history will know of the Boston Tea Party and the Battle of Bunker Hill, both events that are synonymous with the Revolution.

Boston is now one of the most prosperous cities in America. With world-renowned educational establishments like Harvard and MIT, newspapers like the Boston Globe and sport franchises like the Bruins (hockey), New England Patriots (American football) and Red Sox (baseball) it is certainly a city that also offers diversity like few others in the USA.

At just over 230 square kilometres in area, Boston is not a large city. Indeed it took me just fifteen minutes in a cab from Logan International Airport to my hotel, the Four Seasons on Boylston, which has views of the Public Garden and Boston Common, the oldest public park in the United States.

After my recent fairly negative visit to Philadelphia I was so excited by this trip to Boston and I was not disappointed.

From the “Make Way for Ducklings” bronze statues in the Garden, to taking the Freedom Trail (a four kilometre historical tour of Boston) and not forgetting a walk along the banks of the Charles River. Oh, and the shopping on Beacon Hill and the fabulous pizza at Upper Crust in Fenway. I had three terrific and fully-packed days in the dry chill of Boston.

One thing I did notice on my visit to Boston was that on every street there is a “highlight”. It could be a historic building, cemetery, church or monument, a statue or even just a gas-lamp. If you don’t keep your wits about you and your eyes open in this city, you will miss something of interest!

What a way to end the year.

All that leaves me to do now is to wish you a Very Merry Christmas, Happy, Peaceful & Prosperous New Year and safe travels for 2011!