Leica cameras are legendary in the world of photography for many reasons.

So many of the great photographers whose work we love have used Leica. The work of Henri Cartier-Bresson, Alfred Eisenstadt, Margaret Bourke-White, Lisette Model, Robert Capa, Walker Evans, Ilsa Bing, Yousef Karsh and others too numerous to mention, have truly made Leica the “paintbrush of the masters.” Even today, the work of Sebastao Salgado, David Douglas Duncan, Robert Frank, Mike Kamber, Nan Goldin, Ralph Gibson, Craig Semetko and others carry this tradition into the future.

Through my years of using Leicas as a photographer, collecting them for my own pleasure and studying their history as a member and officer of the Leica Historical Society of America, I’ve come to understand that each new model has been a step forward in the development of this iconic camera.

In the 97 years from the first prototype Ur-Leica of 1913 to the recent introduction of the Leica M9, the camera has evolved to meet the needs of photographers to incorporate the latest mechanical and optical innovations and to improve the materials and workmanship that make it a classic. Step by step the capabilities of the camera were steadily expanded through invention and innovation. There where several additions in the 1930s: an interchangeable lens mount (1930), a built-in rangefinder (1932), slow shutter speeds and strap lugs (1933), the self-timer (1939). The introduction in the ’40s and ’50s included the ball-bearing shutter, parallax corrected viewfinder and the bayonet-mount M3 camera. The 1970s saw the introduction of built-in light meters and in 1998, TTL flash metering. The M7 of 2002 added an electronically controlled shutter with aperture priority automatic exposure and eventually Leica made the big leap to a digital Leica M camera in 2006 with the M8 and now the full-frame Leica M9, introduced in 2009. Leica still makes the Leica M7, MP and “a la carte” cameras for film users. It is the only major manufacturer making professional grade film cameras today!

There has been a parallel development of lenses to keep pace with the technology of lens design, new glass formulations and the demands for a wider range of focal lengths. A systematic approach has always been followed by Leica designers so that nearly every lens, going back to the first interchangeable screw-mount lenses, can be used on all of today’s film and digital Leica M cameras. No other camera manufacturer comes close!

To illustrate this point, I’ve used lenses from the golden era in the 1950s with today’s latest digital M cameras. In that period, Leica was making both screw-mount and M cameras and lenses and they introduced classic lenses that have endured in popularity and production. Leica screw mount 35mm f/2 and 50mm f/2 Summicron lenses were used for the photos above with screw to M adapters on the Leica M9. Both lens designs were produced unchanged well into the late 1960s and have been redesigned several times since with optical and mechanical changes to incorporate the latest technology. There were only 577 Summicron 35mm f/2 lenses made in Leica screw mount, making it among the rarest of Leica lenses. The 50mm f/2 also had a rather  small production run of 1,160.

These two vintage lenses produce images that are technically excellent, even by today’s standards. The modern 21st century versions of these lenses have more contrast, sharpness and color saturation. However, in high contrast lighting condition I prefer the increased shadow detail and smooth tonal gradation of the vintage lenses, especially in black & white. 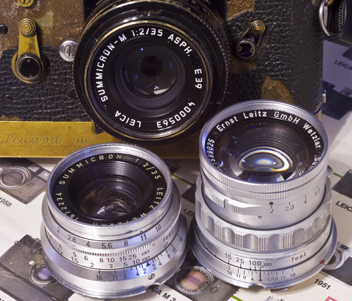 This black-and-white street scene below illustrates my point. Note the loss of detail in the sky and darkened pavement caused by the high contrast of the 35mm f/2 Summicron-M ASPH image [bottom image] compared to the vintage lens result [top image]. This is where you want a “flatter” contrast lens for a longer tonal scale.

And finally, a color test with the modern lens again on the bottom showing slightly brighter and more saturated colors and more apparent sharpness.

You can see more of Carl’s work on his page on Facebook, http://www.facebook.com/carl.merkin.photographs.