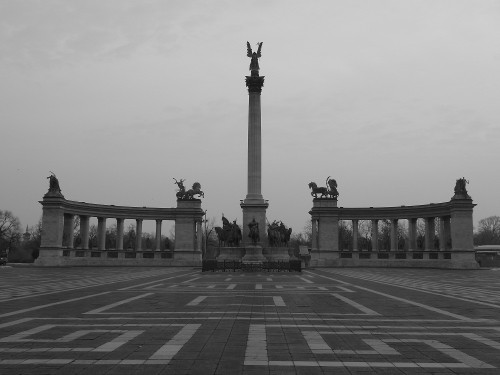 Answer to “Where am I?”: Budapest, Hungary; Heroes’  Square (Hosok Tere in Hungarian)

This magnificent square – complete with monuments – is located at the end of Andrassy Avenue and is flanked by the Museum of Fine Art and Hall of Art respectively. Heroes’ Square took four years to build (1896 to 1900). A 36-metre high stone column dominates the square and is crowned by a statue of the Archangel Gabriel and features at its base, the statues of the seven tribal leaders that founded the country in the 9th century. The people of this proud and wonderful country do not see themselves as Hungarians but as Magyar.

I not a professional photographer, and in the real sense of the term, I am not an amateur photographer either. I am a world traveller who loves stories. Until this fabulous Leica project came along, I didn’t even carry a camera round with me as I had a film crew which captured memories for me.

These past few months my trusty V-Lux 20 has taught me much about choosing subjects, use of black & white and even texture. I will always be a “point & shoot” man and sadly, this will always limit the kind of photography my camera can achieve.

In a few weeks time, I will be waving farewell to my V-Lux 20 and be taking on a new Leica camera. I am not sure which one yet but hopefully it will be as easy to use and will provide the same if not better quality of pictures.

My first trip of the year was to Budapest. Having visited nearby Prague in 2010, which was visually stunning, my expectations were high – thankfully I was not disappointed. Off the bat, I will say that with Prague, what you see is what you get, with Budapest it’s much more of an exploration.

Budapest was created in 1873 when three cities were amalgamated: Obuda (Ancient Buda), Buda and on the other side of the River Danube, Pest.

There are many famous individuals, that you may or may not know, who hail from Hungary including: Bela Bartok and Franz Liszt (composers), Johnny Weissmuller (the original Tarzan), Harry Houdini (escapologist), Zsa Zsa Gabor (actress), Alexander Korda (film producer/director), Bela Lugosi (the original Dracula), George Soros (investor and philanthropist), Erno Rubik (the Cube inventor), Judit Polgar (arguably the greatest female chess player of all time) and Laszlo Biro (inventor of the Biro pen).