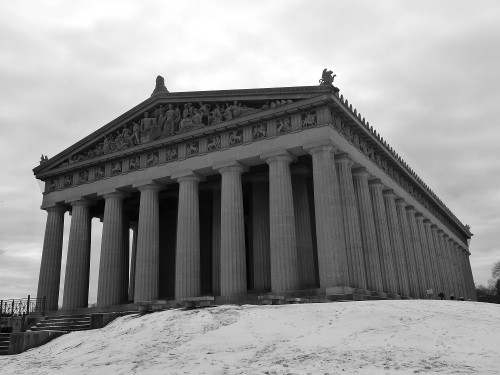 Answer to “Where am I?” : Nashville, Tennessee.

This is the second full-scale replica of the Parthenon built in Nashville. The first was constructed in 1897 as part of the Tennessee Centennial and International Exposition. At that time, Greek architecture was popular in the USA. The “1897” was in complete disrepair just twenty years later so the city decided on a full rebuild. Not only was the exterior reconstructed using more permanent materials but the interior was, for the first time, created to look like an exact replica of the original Parthenon in Greece.

Looks like we’ll be making the clue tougher next time.

It is Monday April 4, 1960 at around 4 a.m. and Elvis Presley has been in Studio B since 10 p.m. the previous night. He famously only recorded on a Sunday and then late in the day when his creative juices were in full flow. The King’s manager Colonel Parker had suggested that he records his own version of a song by Lou Handman and Roy Turk that was first published in 1926.

Elvis demanded that all the lights in Studio B were dimmed and then sitting at the Steinway piano he began to sing, “Are you lonesome tonight, Do you miss me tonight? Are you sorry we drifted apart?”

This song went on to become what was arguably the King’s greatest hit.

Nashville is the home of “Country & Western” music. I am not a fan. Actually I thought I was not a fan, but now I am not so sure.

I arrived in Music City on a particularly cold wintry day and was driven to, in my humble opinion, the only real luxury hotel in the city, The Hutton. What I knew about the city you could write on the back of a postage stamp: three hours drive in one direction is Memphis and Graceland (where Elvis lived), three hours in another is Dollywood (Dolly Parton’s theme park) and ninety minutes in another is Lynchburg, home of Jack Daniel’s whisky … that’s it.

By the time I left the city, three days later, I had learnt that Nashville is home to the music that – sometimes inadvertently – I have been listening to all my life.

Nashville was founded in 1779 and became the capital of Tennessee State in 1843. After the American Civil War, it pulled itself out of financial ruin by re-establishing itself as a major shipping and trading city.

In 1927 the Grand Ole Opry live country & western weekly music extravaganza was launched – after two years as just a weekend evening radio show.  It still runs today and features the good and great from the “C & W” music scene. You cannot visit Nashville and miss out on the Grand Ole Opry. Elvis played the Opry only once, in 1954, but his performance proved too much for the audience who didn’t like the way his hips gyrated with his music!

Nashville, due to its geography, became the commercial hub for all the southern sound: bluegrass, blues, country, western, folk and gospel. All the major record labels have studios here.

The Country & Western Music Hall of Fame & Museum is a fascinating look at the history of music in Tennessee and the Hall itself is a veritable Who’s Who of C&W music. My only disappointment is that the great Roy Orbison has yet to be honoured.

I cannot overstate the prime position that Nashville holds in the pecking order of modern western music. Yes there was Elvis, but also Parton, Wynette, Swift, Rogers, Cash, Reeves, Denver, Campbell, Underwood who have all played their part (and still are) in making Nashville – Music City.