This is an article about failure — a post to which my fellow photographers can all point and exclaim, “See! That’s what happens to morons.” Like most stories with a moral, this one begins “once upon a time” (four long months ago) when I finally decided to part ways with my Canon cameras, lenses and other assorted bits of related flotsam and jetsam.

My Canon gear saw very little action these past two years, but the system and I did share a two decade photographic history. So there were a few inevitable twinges of regret — none more painful than parting with my beloved Canon 135 mm f/2 L lens. The Canon 135 was beloved for one basic fact: the images it rendered were consistently stunning. Yet it was always the least-used of my SLR lenses. The reason for this paradox is simple — I just don’t see in 135 mm. Never the less, the technical quality of the 135mm f/2 L images were so beautiful that I carried it everywhere — looking, hoping, longing for something to photograph with it.

But that 135 mm focal length always sat right smack in the middle of my own photographic nowhere. Either it was too long, and I’d shoot the 85 mm instead, or it was too short, and a 200 mm would create just the look I wanted. Year after year, the 135 remained in mint condition because, year after year, it went mostly unused. Over time, I managed to stumble upon two occasional occupations for this lens: concerts and events. Specifically, I found it ideal for shooting backing musicians from the front of the stage, and for stealing candid portraits from across the room at corporate events. That’s it. For me, the Canon 135 was a beautiful pony that knew only two tricks. As such, my love for this lens was more idealistic than realistic. 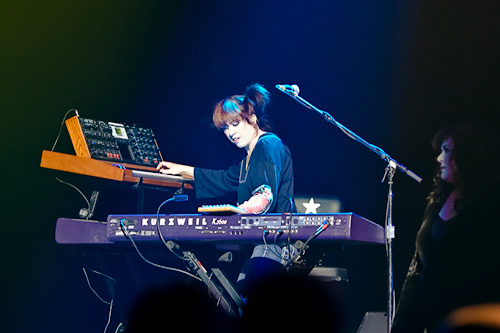 Only two days after selling the Canon 135mm f/2 L, I chanced upon a pair of old Leica 135 f/4 Tele-Elmar lenses in a local camera shop. Because of my struggles with the 135 focal length, I never had any inclination to use such a lens with my Leica M-mount bodies. But I was still in mourning for the recently departed Canon 135, so I asked the dealer to show me the two lenses. One of them looked as if it had seen significant combat action during the war in Vietnam. The other stood gleaming and unblemished within its original protective tube — resplendent after what I can only assume was a 40 year career as an objet d’art at the Louvre. Either that, or the previous owner, like me, hadn’t a clue what to shoot with a 135.

With the vaguest of interest, I glanced at the price tag on the Vietnam copy. Leapin’ Leica, it was cheap! Classic, heavy metal Leica thunder for one-third the cash I’d just collected for my Canon 135? Granted, it sported a few shards of imbedded shrapnel and had apparently been dropped, more than once, from a helicopter. But it was the least expensive Leica I’d ever laid eyes on. Then, just to satisfy my curiosity, I checked the price of the sparkling, mint condition copy — knowing it would likely be crazy expensive. It was a mere $50 more.

At this point, I can only surmise that I blacked out because the next thing I recall was standing in front of the camera shop, shooting test photos with the 135 mounted on my M9 and checking the image quality on a laptop. Yet, curiously, I had neither the M9 nor the laptop when I first entered the store. In some kind of hypnotically possessed state, I had apparently driven home, grabbed the camera and computer and returned to the shop. My next lucid memory involves pulling cash from my pocket (which was also not there when I first arrived at the store) and handing it over to the dealer. Reminiscent of the way some people compensate for the death of a pet by instantly getting a new one, I had just replaced my Canon 135 f/2 with an immaculate M-mount 1967 Leica 135 f/4.

Crap. Now I had to find something to shoot with it.

Modern wisdom — gleaned from my perusal of various internet photography forums — suggests that the aforementioned pet makes an ideal subject for a photographer starved of inspiration. Alas, I possess no cats, dogs, fish, ferrets, iguanas, puffins or any other critters at which to point the 135. I do, however, live in a glass-walled condo, so my first inclination was to simply shoot willy-nilly into the center of downtown Vancouver. 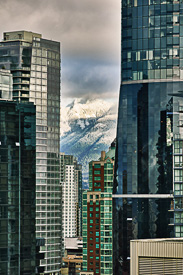 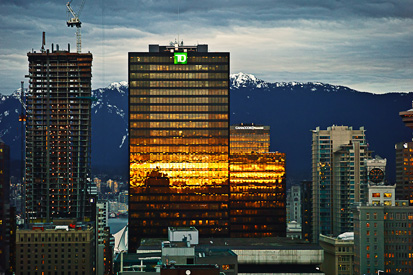 Although these photos verified that the lens could indeed form an image on a sensor, I certainly don’t have any pressing need for mind-numbingly dull shots from my apartment window. So I went outside … and inexplicably kept shooting buildings. 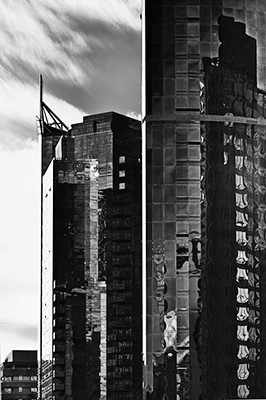 Why? I don’t know. Probably because I haven’t a clue what to photograph with that 135 mm focal length. Concert and event photos, which had become subject matter for the Canon 135, both require an f/2 aperture, but the Tele-Elmar only opens to f/4. I had violated one of my own core photographic commandments, “Thou shalt not purchase gear for which thou hast no specific application.” So, reminiscent of my Canon days, I began to carry the Leica 135 everywhere I went — looking, hoping, longing for something to photograph with it.

The rangefinder’s natural synergy with wide and standard focal lengths further complicated my struggle. Most Leica M users (myself included) gravitate toward wider lenses. Unless you’re extremely gifted and persnickety about cropping, wide lenses allow plenty of framing leeway — helping photographers, in hurried moments, to successfully place all the intended elements somewhere within the frame. Similarly, wide lenses have extensive depth of field, meaning you can be rather sloppy with your focusing accuracy. And, equally as important, you can use slower shutter speeds without worrying about camera-induced motion blur. Wide lenses forgive a multitude of sins. And I should know, because Dante recently purchased several of my street photos for Hell’s newly remodelled Grand Foyer.

In contrast, the 135 Tele-Elmar is about as pious as a lens can be. It renders a shallow depth of field that demands precise focus. It’s unforgiving of even the slightest camera motion, meaning that coffee addicts (like myself) need to keep their shutters set to “snappy.” And framing? If you’ve ever looked through your M9 and pondered the purpose of that tiny little rectangle centered within your luxuriously spacious 28 mm frame lines — that’s the field of view offered by the 135!

So not only don’t I know what to shoot with this lens but, sinner that I am, I can’t shoot it worth a 3-legged octopus. I have purchased a lens that will do nothing but frustrate me; that will expose and amplify my personal weaknesses and force me to question my abilities as a photographer. Even worse, I’ve committed to discussing this lens on The Leica Blog, insuring that my failure becomes public spectacle.

Anyone who wishes to elevate their self esteem by heaping derision upon a fellow photographer should subscribe to The Leica Blog feed. You definitely don’t want to miss Part 2’s graphic examples of photographic carrion.

grEGORy simpson is a professional “pounder.” You may find him pounding on his computer keyboard, churning out articles for both the Leica Blog and his own blog at photography.ultrasomething.com. Or you may hear him pounding on a musical keyboard, composing music and designing new sounds. Frequently, he’s out pounding city pavement and photographing humans simply being. This third act of pummeling has yielded a new photography book, Instinct, which has given Mr. Simpson a fourth vocation — pounding on doors in an attempt to market the darn thing.