As recounted in Part 1, I recently purchased a 1967 Leica 135 f/4 Tele-Elmar lens and committed to discussing its merits for The Leica Blog. There’s only one problem — I wield a 135 with about as much skill and finesse as a monkey with a scalpel.

Before I dive into the meat of this article, let’s dispense with the potatoes — the lens itself. The Leica 135 f/4 Tele-Elmar is a fantastic lens and it delivers everything that any sensible person could ever want from a tube full o’ optical elements. The tale of woe that surrounds my use of the Leica 135 owes nothing to either the quality or technical merits of the lens. Rather, it has everything to do with my ability to use it properly.

Intellectually, of course, I know full well how to use a 135mm lens. I know its optical attributes and the type of subjects suited to those attributes. But I also know that my personal photography has less to do with intelligence than with emotion and, as such, this focal length’s personality quirks seem at odds with my own.

For example, I realize that 135mm lenses flatten perspective, which can help disparate objects within a photographic frame share significance. It’s a trait that makes 135s particularly adept at certain types of landscape photography. 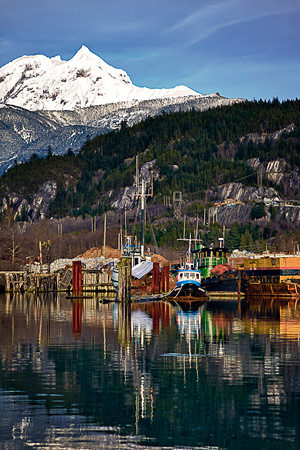 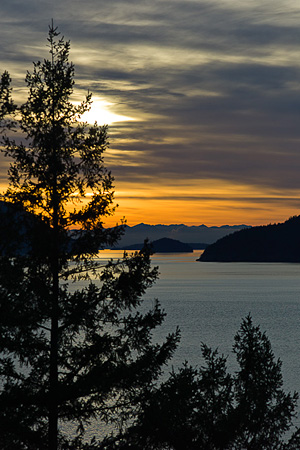 But just because the lens is ideally suited to landscape photography doesn’t mean that I am. Though I was once employed as a landscape photographer and enjoy working in that discipline, it’s rarely a subject I choose to photograph for my own personal projects. I seldom make photographic forays specifically for the purpose of shooting landscapes, so this lens will likely see little actual landscape work.

Another obvious attribute of the 135 is that it lets the photographer shoot distant subjects without getting close to them. Perhaps I could adapt this characteristic to my street photography. I spent two weeks wandering the streets with the 135 affixed to my M9 and, as a consequence, missed dozens of excellent 28/35/50mm photo opportunities. The simple fact is, I tend to look for photographs that are only two meters away from me, not 20. Even if I did manage to spot an enticing photo opportunity 20 meters away, the gap ‘twixt camera and subject would fill with dozens of pedestrians, all of whom would obstruct my shot. The only instances in which this lens worked in a street scenario were when pedestrians tended to avoid my subject and, thus, gave me an unobstructed shot. 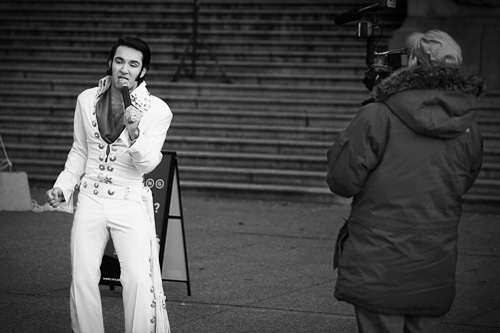 It was clear I must seek a different path. Perhaps the lens itself could tell me what to shoot. I twirled it around in my hand and marveled at its impeccable construction. It was built like the proverbial tank. Is that the clue I needed? Maybe the copy of the lens I didn’t purchase — the “Vietnam War” copy — was the one to have fulfilled its intended destiny! Maybe this lens was designed specifically for combat — to withstand the rigors of war while providing enough reach to protect the photographer from bullets whizzing through the air. Maybe I just needed to rethink my street approach.

Here in Vancouver, the air is thankfully rather free of whizzing bullets. So, in order to test my theory, I would need to simulate these conditions. The only thing vaguely heinous to traverse Vancouver’s sky is the annual heavy winter rainfall, so this would have to suffice. Obviously precipitation doesn’t provoke mortal fear, but I do have a certain acute phobia about shooting my digital Leica M9 in the rain. Maybe this would be the lens that lets me shoot more in inclement weather. I could hide in protected doorways or under awnings, which would shield the camera from precipitation, while the lens would provide enough reach to photograph those who are forced to battle it.

As fate would have it, the first heavy precipitation occurred on a very cold day and I had only a half charged battery in the M9. Since I didn’t want to risk having the battery deplete while I was out shooting, I coupled the 135 to my winterized camera — a Leica M6TTL with the meter battery removed — and went out into the snow. 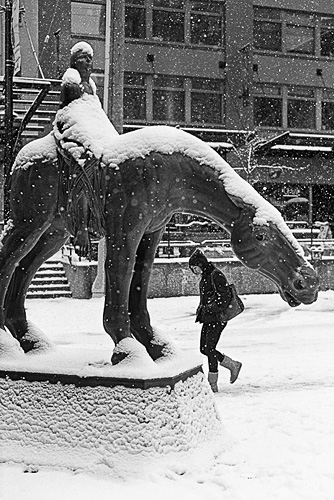 It took me only a single afternoon to discover that, for someone who photographs “humans being,” inclement weather results in a dearth of quality photo opportunities. People tend to stay indoors in such conditions. Not only that, but lurking in the shadows just made me feel kind of creepy. I usually make every effort to photograph from the middle of the action, rather than from the outside. My attempt to simulate battle conditions may have uncovered a potential use for the lens, but it’s not a use I’m likely to explore further.

So I continued to look at the lens’ attributes for guidance. I’m aware that long lenses possess a narrow depth of field, which makes them extremely effective at isolating subjects from their background. Current trends in portraiture suggest that the 135 might make a very nice portrait lens, since the general public now equates “portrait” with “person seen against a sea of background blur.” Call me contrary, but I tend to favor environmental portraits, in which the subject is actually juxtaposed with their background. So, once again, another ideal 135mm usage scenario failed to meet my own personal needs.

Trendy portraits are, of course, not the only subject that benefits from shallow depth of field. Flower photographers, for example, would likely enjoy this lens immensely. Alas, I am decidedly disinterested in flower photography, and winter isn’t exactly “flower season” here in Vancouver. 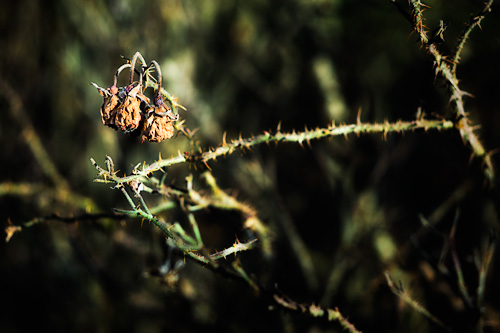 After this, I took the lens on a brief journey into abstract territory — hoping to capitalize on its beautiful out-of-focus renderings. The result of this photographic voyage is a disk full of soft, pillowy images — all purposely taken out-of-focus yet, to the untrained eye, indistinguishable from crappy accidentally out-of-focus images. 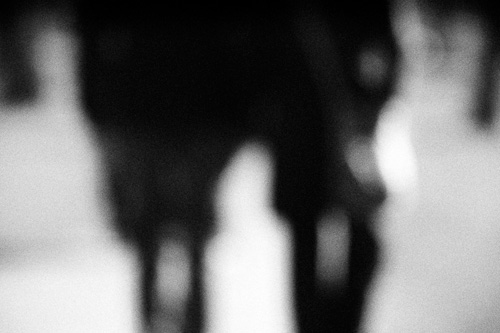 Weary, disgruntled and humbled, I removed the lens from my daily carry bag and put it on a shelf with my other specialty gear. Freed of my obsession to make proper use of the lens, I turned my attention toward figuring out what I had learned from the experience. The facile answer is, “Thou shalt not purchase gear for which thou hast no specific application.” But this is something I already learned long ago. And it is, after all, one of my own commandments — so it can’t really be a moral.

Perhaps there’s a deeper meaning. Only twice in recent history have I violated this commandment, and both times it was with a 135mm lens. Is there a connection? Maybe it’s an indication of a mental synapse with an underdeveloped neurotransmitter; a mystical connection between myself and those 135 measly millimeters that ceaselessly seduce me without cause.

Alas, I fear nothing so extraordinary is at work here. Rather, I suspect the moral is simply this: “On occasion, we all make silly choices and take lousy photographs — but only someone two-stops shy of a full exposure would document it on the internet.”

grEGORy simpson is a professional “pounder.” You may find him pounding on his computer keyboard, churning out articles for both the Leica Blog and his own blog at photography.ultrasomething.com. Or you may hear him pounding on a musical keyboard, composing music and designing new sounds. Frequently, he’s out pounding city pavement and photographing humans simply being. This third act of pummeling has yielded a new photography book, Instinct, which has given Mr. Simpson a fourth vocation — pounding on doors in an attempt to market the darn thing.