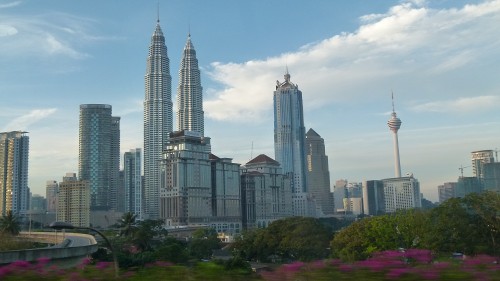 Answer to “Where am I?” : Malaysia, and specifically, the famous Kuala Lumpur skyline. The major landmarks from left to right are: Petronas Towers, the Mandarin Oriental hotel and the KL Tower.

“Melayu” is taken from a Sanskrit term that means “land of mountains”. Kuala Lumpur translates as “muddy estuary”. Malaysia was formed in the 18th century and is separated into East and West by the South China Sea. To the west is the mainland (Peninsula) with Thailand to the north. To the east is Borneo bordered by Brunei. Kuala Lumpur is the 5th most visited city in the world and its skyline is one of the most recognisable in the world. At 451.9 metres, the Petronas Towers is still the tallest twin tower construction ever built. The Towers were featured in the 1999 Sean Connery bank robbery flick, “Entrapment”. The KL Tower, at 421 metres in height, is the second tallest freestanding tower in the world.

I have no fear when it comes to wild animals. I have cuddled a tasmania devil, gone scuba diving with tiger and great white sharks, shared an apple with a cassowary, been stalked by an unhappy female rhinoceros, charged by an elephant, abused by an ugly baboon, been savaged by penguins and fed raw meat to polar bears, but I do have one nemesis — the mosquito.

It seems that wherever I go the “mosquito family” has one of its members there ready to take advantage of my thick, sweet and juicy blood. The constant itching, unsightly lumps, weeping wounds and general discomfort are just a few of the side effects from a small vampire-like bite. Of course there are preventatives: creams, garlic tablets, vitamin D, sprays, wrist bands, iPhone apps, buzzers, nets, swats, coils, tea tree oil and that old favourite tonic water (with a splash of Gin), but sadly none of these seem to work effectively for me (although I do try the last remedy time and time again in hope!).

My latest filming trip to Malaysia, while truly splendid, was marred by unwelcome and frequent visits from my archenemy.

The first stop was Kuala Lumpur. I have explored KL before, so was not too upset that I had to leave after just twelve hours and head to the state of Pahang, situated on the East coast of the Peninsula. I have to mention though that the KL skyline in both day and night time is spectacular. I believe it to be one of the “sights to see before you die”.

Pahang is the third largest state in Malaysia, with roughly two-thirds of it made up of rainforest. I was lucky to be offered a helicopter to ferry me and the crew to Tioman Island just 32 kilometres off the coast.

The eco-resort JapaMala boasts that it can be dismantled entirely within a fortnight and that all trace of its existence wiped away. If true, this is sustainable tourism at its best.

Tioman Island is made up mainly of rainforest and is filled with creatures including flying squirrels, monitor lizards, monkeys, snakes (including the python) and mosquitoes. In the sea you will find turtles, walking catfish, as well as the wrecks of several World War II ships, which adds to the diverse diving locations on offer around the island.

Next time you watch the classic 1958 movie “South Pacific” keep in mind that the beaches featured in “Bali Hai” were actually filmed on Tioman.

From Pahang, I ventured north to Terengganu state and one of the finest resorts in Malaysia , Tanjong Jara. The resort is designed to look like a 17th century Malay palace and I had one of those archetypal luxury beach chalets. My suite was stunning, but the views of the South China Sea made it extra special.

Thankfully I did not have to worry about being bitten by snakes or spiders here or chased by monkeys, but yes, I did get nibbled on by the Tanjong Jara chapter of the Mosquito family.

One of the highlights of my visit to Terengganu State was venturing to the fish market in Dungun. In good old England, I head to the fish market where all the produce is laid out on clean ice and sanitation is the key to sale. Here in my Malaysian fish market, there was no need for ice as the fish was being bought in by the hour, fresh from the boats and sold immediately. Not only did I witness the main ingredient of fish head soup start life but also catfish leaping in and out of buckets, red snapper fighting for their final breath and king prawns playing chess on table tops.

Before I sign off today, I must mention that none of my crew were bitten ONCE by a mosquito on the entire trip.