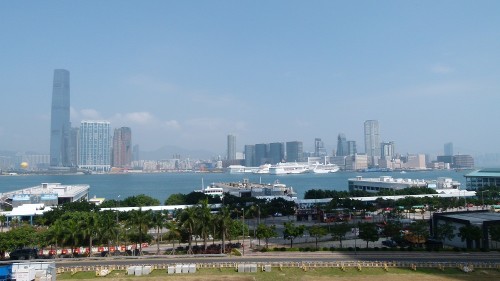 Answer to “Where am I?”: Hong Kong

This photograph was taken using a V-Lux 2 from a balcony on the 45th floor of the Four Seasons Hotel on Hong Kong Island showing Kowloon on the Victoria Harbour waterfront. My highlights from left to right:

ICC (International Commerce Centre) – at 484 metres it is the tallest building in Hong Kong. Floors 103 to 118 are occupied by the Ritz-Carlton Hotel that opens on March 29th. On the top floor (118) is an infinity swimming pool and outdoor area where you can literally have your head in the clouds.

The name Kowloon came from the nine dragons represented by eight peaks and a Chinese emperor. You can just see a peak or two in the distance.

Ocean Terminal – offering berths for cruise liners and a shopping mall, which at 112 shops, stores & boutiques is the biggest in Hong Kong.

Hong Kong Museum of Art – is a wonderful place to visit on a rainy day. It houses fabulous collections of Chinese art.

The Peninsula Hotel – one of my “Top 5” hotels in the world.

The Avenue of the Stars (Hong Kong’s version of the “Hollywood Walk of Fame”). Inductees on the Avenue include: Jet Li, Michelle Yeoh, Jackie Chan, John Woo, Chun Yun-fat and Bruce Lee. It is also a superb location to watch the Symphony of Lights, a memorable music and light show that makes both sides of Victoria Harbour sparkle.

My first business trip to Hong Kong was back in 1997. The then international airport Kai Tak, which opened in 1925, carried the unenviable tag as the “sixth most dangerous airport in the world”.  Landing on Runway 13 was a true skill test. The pilots would have to fly extremely low over both the harbour and densely populated areas of Kowloon. Finally there was a gut-wrenching 47 degree turn before lining up for landing on the runway, a maneuverer known by pilots as the Hong Kong Turn. This was always a truly unforgettable start to a visit to one of my favourite places on Earth.

My latest visit to Hong Kong was just three weeks ago. There was an uneventful landing at Chep Lap Kok International Airport (which replaced Kai Tak in 1998), a clinical chauffeur service through immigration & customs and a 35-minute car  journey (in a long wheel-base green Rolls-Royce Phantom) to The Peninsula Hotel in Kowloon.

I have now visited nearly six hundred luxury hotels in my career and Hong Kong is home to many of my favourites. Sadly the days of the Soap Butler are gone, but thankfully the faultless service, friendly & professional staff, state-of-the-art technology and over-the-top facilities still remain.

For many years, The Mandarin Oriental (Central) and of course The Peninsula were the only hotels to be seen in, but now with the likes of the Four Seasons and The Upper House, the choice of where to stay is getting harder and harder. Throw into the mix the new Ritz-Carlton.

I was afforded the luxury of a hard-hat tour of the world’s highest hotel. It took just 52 seconds for the elevator to jump from Floor 8 to 103! The views from every room and suite, the restaurants and the spa (on the 116th floor) are quite something. In every direction you can see for miles and miles. I would love to be having breakfast in a suite facing the sea as a typhoon rolls in. Can you imagine?

One of the most amazing sights I have seen in Hong Kong was in 2009 when an Airbus A380 flew low over Victoria Harbour. I was standing on the balcony of the Club Lounge at the Four Seasons as the behemoth flew past. I waved and the captain waved back. Just one of my memorable Hong Kong moments.