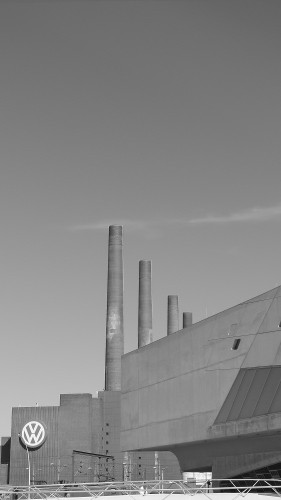 Answer to “Where am I?”: Wolfsburg, Germany

Wolfsburg is most famous for Autostadt (Car City). Volkswagen cars have been produced here for over 70 years; the same age as Kraftwerk (above), which translates as the “power station”. It pumps out enough energy to produce up to 3000 vehicles per day. Autostadt is 25 hectares of car plant, power station, luxury hotel and guest entertainment centre. The parent company now owns brands like Audi, SEAT, Lamborghini and Bentley.

On the right side of the photograph is phaeno, Germany’s largest walk-through sculpture. There’s enough concrete in the building to fill a thirty metre cube and enough iron to make five thousand cars!

Last weekend I picked up my nice, new 4×4. I travelled by train down to Cornwall (several hundred kilometres away), turned up at the dealership, shook a few hands, autographed a ream of finance papers, loaded up the six-CD player and drove home. Easy!

Sadly though, there was never an option to travel to where it was assembled, in Sweden, to watch as the vehicle rode off the assembly line and then to drive it the several thousand kilometres home. What an adventure that would have been!

For anyone who buys a Volkswagen in Germany (and a few select nearby countries), they do have the chance to enjoy the premier new car ritual by taking an auto-pilgrimage to Autostadt.

The city of Wolfsburg is around eighty kilometres from Hannover and two hundred from Berlin. With over 50,000 workers, Autostadt is undoubtedly the area’s biggest employer.

My home at Autostadt was the Ritz-Carlton hotel. For a property that is over a decade old, it looks as if it was built just yesterday; it’s just so perfect. It is also an integral part of the complex, as many of the guests who stay are there to pick up a new car.

It features a 3-Michelin starred restaurant (Aqua) and an outdoor swimming pool that is heated all year round to a comfortable 29 degrees Celsius. There is also a huge dock next to the pool. In summer, this becomes an enormous swimming pool complete with small sunbathing and dining islands. The water in the dock is so clean that it is fit for human consumption.

Kraftwerk is fuelled by coal and this whole part of the German countryside is punctuated by pits. The coal is delivered to the plant by barge just as it has for decades.

I have never hid the fact that I am not a professional or even amateur photographer, but I am always willing to learn. Heinrich Heidersberger is recognised as one of the world’s greatest photographers. His archive sits in the 13th century Wolfsburg Castle and the Institute there is his legacy. I was allowed to look at hundreds of his original pieces and learn some of his tricks. One of his most famous photographs is of Kraftwerk (a large and expensive print sits in the hotel), in which you will notice clouds in the sky. In reality, the clouds were added in by Heidersberger. In fact, he had a “library of clouds” and liberally added clouds to many of his works!

Wolfsburg is a city many people outside of Germany have never heard of, but for car enthusiasts, photographers, gastronomes and luxury travellers it’s a must.