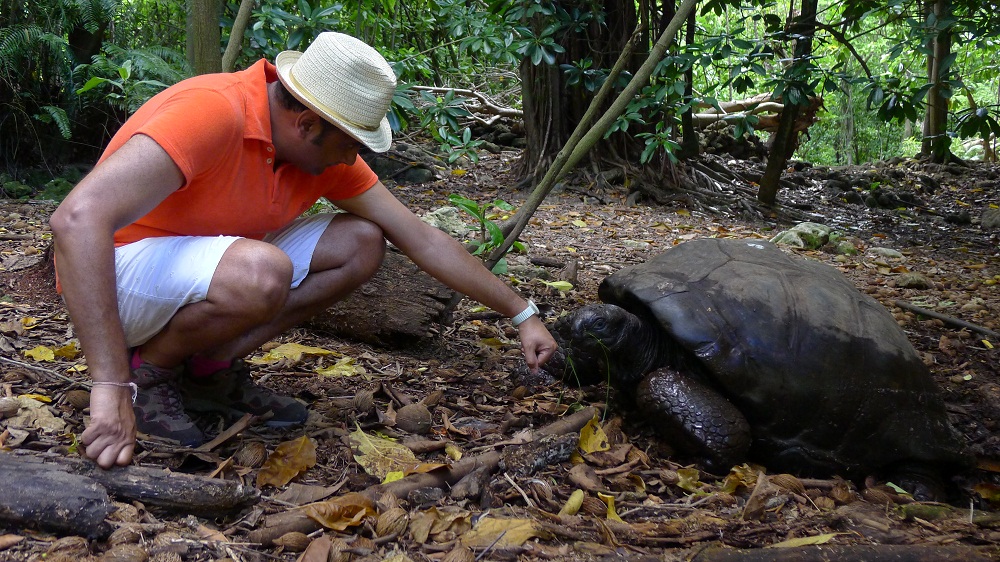 Answer to “Where am I?”: Seychelles

I was on Cousin Island – a 27 hectare “special reserve” that lies two kilometres from the major island of Praslin. The moniker for Cousin is “The island that belongs to birds. Humans are welcome”. In 1968, to initially protect the near extinct species of the Seychelles Warbler bird, Cousin was designated a protected island. Now the ex-coconut plantation is home to many species of bird, lizards and tortoises. There is a team of conservationists and volunteers on Cousin whose one aim is protect the wildlife and ensure that those close to extinction are brought back from the brink. Visitors are allowed on the island, but for just a couple of hours a day.

There are no chemicals used on Cousin – so for instance mosquitoes (they are a good source of food for birds) are allowed to breed at will. Prepare to get ravaged especially in the swampy areas where the giant Aldabra tortoises prefer to reside. I was munched-on over a dozen times in the space of ten minutes (I am still itching a week later), but to get to spend time with the gentle and amazing tortoises was totally worth the discomfort.

The Aldabra tortoise was once hunted (for its meat) almost to extinction. Now protected in the Seychelles (and Mascarenes & Galapagos) this thriving reptile can grow up to 1.5 metres in length, weigh 300 kilograms and live to over 100 years old!

Congratulations to everyone who answered correctly on the blog, Facebook and Twitter: John, Orko, Matt, Robert, Jose and Sue.

I am just back from the Seychelles, a group of around 115 islands in the Indian Ocean. With only 85,000 inhabitants, it is the smallest African nation by population. After chilly trips to Germany and France, I was looking forward to visiting a country where even when it rains and is overcast, the temperature allows to you to wear shorts and a flowery shirt.

As you know by now, I have never been one to take photographs — that is until I was offered this Leica assignment. Memories for me were always jogged by watching a DVD of the television shows we produce; until the onset of high-definition though, the colours were never as striking as reality. My Leica D-Lux 5 has redefined the way I see and remember the colours.

The shoot started on the largest island, Mahe. The resort offered lush, dense rainforest that was punctuated by luxury villas. Every evening I sat in my pool watching the sun dip under the Indian Ocean as fruit bats screeched overhead in preparation for their evening feast. The colour of the sky changed by the second until a final explosion of colour as the evening sun disappeared, signifying the start of night.

The small private resort that is Denis Island offered beaches so bright that it looked like someone had whitewashed the sand. Every seashell, piece of flotsam & jetsam or leaf created shadows and colour on the beach that was accentuated by the extreme brightness. We recreated the “footsteps in the sand” photo quite successfully.

The final island was Praslin, home to the famous Vallee de Mai. Yes, I did see the male and female Coco de Mer trees that made me blush and smile at the same time. Mother Nature does have a sense of humour, but my abiding memory here was taking a small cruiser onto the Ocean and watching the colour of the water change as the day progressed. There are simply hundreds of shades of blue and I & my Leica saw them all in one day. Fabulous!