Leica Explorer: Annie Atkins in the Footsteps of Nain Singh

Leica Explorer Annie Atkins Annie traveled from Dublin, Ireland to the Everest Base Camp to follow in the footsteps of Nain Singh. Due to some logistical issues Annie had to take a bit of a different path, journeying through China, into Tibet and back from February 13 to March 20, 2011. All the while chronicling her travels on her Leica Explorer blog. We had the opportunity to talk with Annie about her journey to the Everest Base Camp and how the V-Lux 2 performed in such challenging conditions.

Q: How did you hear about the Leica “In the Footsteps of the Great Explorers” contest? Why did you decide to apply for the contest?

A: I was thinking of cycling around northern Vietnam and I wanted to take a sturdier, but more lightweight camera than my DSLR. I had a look at the Leica site and saw they were running this contest. Not thinking I would ever actually win, I quickly chose Tibet without really thinking it through – it just seemed the closest place to Vietnam on the map. Mental note for future reference: Tibet is nowhere near Vietnam. Little did I know that within two months I’d be at Everest Base Camp with a brand new Leica in my pocket. It still feels like it was all a dream.

Q: How did you prepare for your journey?

A: I mostly prepared for my journey by freaking myself out reading all kinds of horror stories online about people’s terrible experiences with altitude sickness and dismissive Chinese tour guides. Tibet is actually very hard to access – it’s not possible to be there without a very restricted visa and a guide. Luckily, I found a wonderful native Tibetan guide online, Wangden Tsering from Snowlion Tours. We spent a long time discussing my trip via email before I even arrived.

Q: What was the highlight of the trip for you?

A: The highlight of the trip was getting to Base Camp and finding Everest completely covered in cloud. It was out of season, there was nobody there and we couldn’t see anything. This would have been disappointing, of course, except that a nun appeared through the mist and brought us in to Rombuk Monastery (the highest in the world) where we sat drinking yak butter tea around the fire with a group of chanting monks. The wind outside was howling and their chanting sounded like the strangest, most beautiful music. It was one of the most peaceful and most surreal things I’ve experienced. If Everest had been visible we probably would have just snapped some pictures and left again. They invited us to stay until the weather cleared, but it had already been like that for a week and the Chinese were closing Tibet to tourists in March, so I had to get out.

Q: What was the biggest challenge you faced during the trip?

A: The high altitude was the worst thing. I went into Tibet by train from Beijing, so the ascent was quite gradual, but even so I was feeling it starting in Lhasa. By the time we reached Shegar (4500 metres) I was practically keeling over. Even Wangden’s nose was bleeding at one point, although he assured me he was fine! Wangden and his two guys Sonam and Yeshi were the most wonderful guides to have on this trip. They stayed right with me until I began to feel better, bringing me blankets, tea and water, and Yeshi had the Jeep ready to go down to a hospital if I needed. I felt so well looked after and I was really glad I hadn’t booked a cheaper Chinese agency. I soon acclimatised though and we hit the road again making it all the way to Everest. Sonam said to Wangden, “Guiding this girl is easy, it’s just like going on a road trip with a friend”. I liked hearing this because by the end of the trip that’s how I felt about them too.

Q: You were “following in the footsteps” of Nain Singh who traveled through the area in the late 19th century. Is his influence still felt in Tibet?

A: It’s strange, but despite the Chinese occupation of Tibet and all the Chinese shops, military and signage, Lhasa still feels much more Indian or Nepalese than Chinese: the smells, the colours, the language, the people, the architecture. The Tibetans I met say they’re afraid that that is changing quite quickly though. I wasn’t able to follow in Nain Singh’s footsteps exactly. The Indian-Tibetan border is closed to everyone except for pilgrims and also because it was winter so the road to Lake Manasarovar was blocked with snow.

Q: How did the V-Lux 2 perform during your travels?

A: I’d read one review saying that it didn’t perform well in the cold, which worried me as I knew it would be absolutely freezing at Base Camp in February. I was dreading coming back from there with no pictures! However, there was no problem with the camera and it must have been minus 15 degrees Celsius at least. It seems like a sturdy camera (I should know, I dropped it twice). It’s also very lightweight and compact for what it does. The zoom lens was great for getting that bit closer to the wildlife – the yaks and the eagles – and also helped in photographing some people when I was too tentative to get up close.

Q: What was your favorite snapshot from the trip and why? 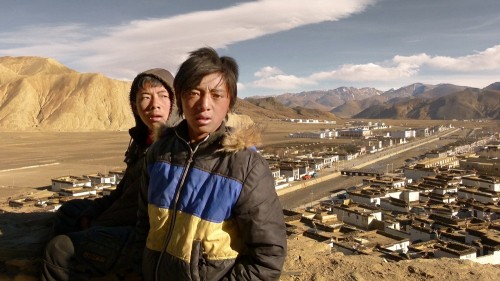 A: My favourite shot was of two teenage boys in Shegar who led us up the side of the mountain. They were obviously really cool kids; in their hoodies and leather jackets they looked like they’d be more at home in Los Angeles, I reckon. After we got down again, they asked us for money for pens and books. I gave them some then asked Wangden if they were really going to spend it on books. He said they actually probably would. That wouldn’t happen in Dublin!

Q: Even before the Leica Explorer trip, you’ve been an avid traveler? Where are you off to next?

A: I’m currently in Oregon, USA, after a road trip through the Nevada desert and into Arizona. This is such an amazing country; there are so many different landscapes to photograph. I think I’ll stay in Oregon for a while now, though I’m still determined to one day cycle around northern Vietnam.

You can read more about Annie’s travels on her Leica explorer blog, http://leica-explorer.com/singh/ and her personal blog, http://annierhiannon.blogspot.com/.