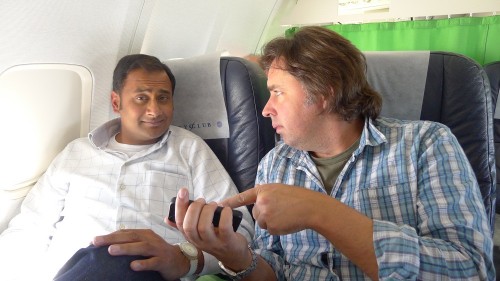 Over the past few months the clues on Viva Varun have obviously been way too easy. I have noticed that the tougher I try and make them, the more correct answers come back. So this week, I thought a bit of fun was in order.

Back in January I visited Budapest for the first time in many years. I was so impressed by what I saw, the people I met and the feel of the city; I knew that I had to film an episode of my television show there this year.

On my latest visit, last week, while I did explore the city again, I also escaped into the countryside and was in for a treat.

For the past decade I have had just one cameraman – Tim. We have flown around the world numerous times together, chased hundreds of sunrise and sunsets, filmed in every climate on the planet and have enjoyed every minute of it.

As well as his trademark television camera, he has always carried a stills with him. Since working with my Leica, his stock quote is “if Leica made television cameras, they would be the best and most expensive in the world”. From the mouth of babes …

While I was trying to capture a stunning sunset in the Seychelles a few weeks ago, Tim turned round to me and said, “Mate, you are taking this photography too seriously”. He had a point. I am in essence a permanent “holidaymaker” and therefore should be enjoying taking photographs, not seeing every shot as a “Leica moment”.

We all know that glossy fashion & travel magazines and hotel & resort brochures use touched-up photographs to sell a product, but we in television-land do not have that luxury and on the whole, what you get is what you see. We don’t have time to set-up shots for hours & hours; it’s point and shoot.

The methodology behind my photography follows that line. I try and capture a fluid moment, nothing is contrived. In the end, it’s just a holiday/travel photograph, albeit a very high-quality one!

Hungary! Yes, there is a country outside Budapest. We travelled to Kutas-Kozmapuszta, which is close to the tip of Lake Balaton, the largest in Central Europe. There we stayed in a hotel that is surrounded by hundreds of hectares of lush green fields. Thankfully Hertelendy Castle – built in 1904 – offers all the latest technology or I would have felt rather isolated.

The facilities on offer are world-class, but the highlight of my stay was jumping into a pond (teaming with frogs and fish) that is heated to around 25 degrees by underground natural hot-springs!

Back in Budapest, the Secretary General of the United Nations was bumped so I could stay in The Royal Suite of the Four Seasons Gresham Palace. The building itself is one of the most beautiful in the city and the views on offer are just superb. Buda Castle, Chain Bridge, the River Duna (Danube) and Fishermen’s Bastion.

Budapest is a city that has had many different “owners” – Ottomans, Nazis, Russians and the architecture mirrors this. Is this the most photogenic city in Europe? Take your Leica there and answer that question for yourself …