Raised in an artsy suburb of New York City and exposed to art, Venetian architecture and photography in his formative years, Justin Guariglia has had a lifelong passion for documentary photography and Leica M cameras that eventually led to a career as a magazine and travel photographer. His wanderlust has taken him and his cameras all over the world, but he has settled in Asia, a vast region he has revealed in stunning books and many feature articles in major magazines including cover stories in National Geographic Traveler and Smithsonian. Here is the second part to our interview with Mr. Guariglia.

Q: Was your project on Malaysia an assignment or a self-assignment, and what inspired you to document the lives of people in this Southeast Asian country?

A: Actually, the project was a commission by the royal family of Johor in Malaysia. John Krich, who I consider to be one of the best travel writers in the world today, and I, had become friendly with the family over the years. They knew the other books we’d done, and asked if we’d be interested to document Johor in the form of a book. It was a very unique collaboration for us, and part of the deal was that we’d be granted 100% autonomy over the final content and edit to keep our integrity. The royal family was the patron, but we did our own thing. As it turns out, Krich’s writing in the book is stellar — think of a beatnik traveler on the back roads through Johor. This ain’t your mammy’s pretty picture book.

Q: Did you have any specific aims or concepts in mind when formulating your coverage of Malaysia, and what do you think you achieved in your work?

A: I was always a big fan of Steichen’s Family of Man, Irving Penn’s Small Trades and I love aerials for their abstract nature — so I proposed combining some of these elements into a book project on the state. The family commissioning me loved the idea and approved it and we just dove right in. I feel we achieved an encyclopedic view of Johor state, both from the air, topographically, but also we really captured the racial diversity of the land. Malaysia is unique in Asia in that is a true melting pot — you have Malays, Chinese, Indians, Sri Lankans, Indonesians, Arabs, Muslims, Christians, Hindus, Sikhs, Buddhists, Taoists, you name it… In Johor Bahru, the state capital which borders Singapore, you can find within a three block radius nearly every religion in the world represented by a place of worship!

Q: Is there any particular image or images of Maylasia that has special significance for you personally, and can you tell us something about it/them? 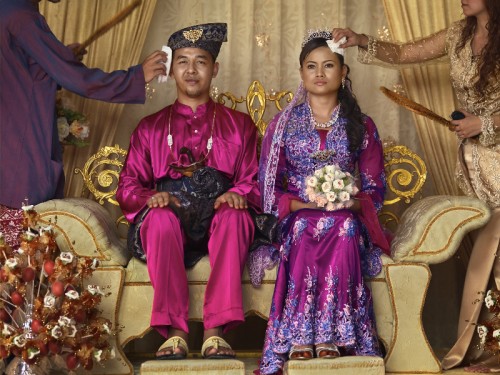 My favorite portrait in the book is the wedding couple being fanned and toweled down by people on either side of them. What you can’t see in the image is that we’re outside, it’s nearly 40 degrees C (over 100 degrees F), it’s 12 noon, the sun is very powerful overhead, there’s no air conditioner or electric fans circulating the air, we’re in a driveway, below us is asphalt and we’re all melting in the heat. The poor guys. They needed to sit there for over an hour greeting guests as they dropped in. Some way to celebrate a marriage. Clearly weddings are for everyone but the bride and groom. 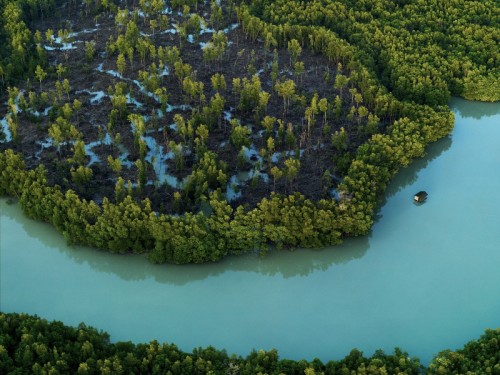 I’ve always found Mangrove forests to be surreal, primordial places. Being 1,000 feet up in a helicopter didn’t quite allow that feeling for this shot, but there’s something special about the colors, the way the water feels painted into the landscape among the trees, and the small shack that sits on stilts in the water nearby. Who lives or works from there? I feel that little shack speaks a lot about our relation to nature these days…

As an aside, only 900 copies of the book will be available in the USA, most copies will stay in Asia – it’s a Japanese hand bound, French-fold book which works out to the size of a 600 page book and it’s available on Amazon for pre-order.