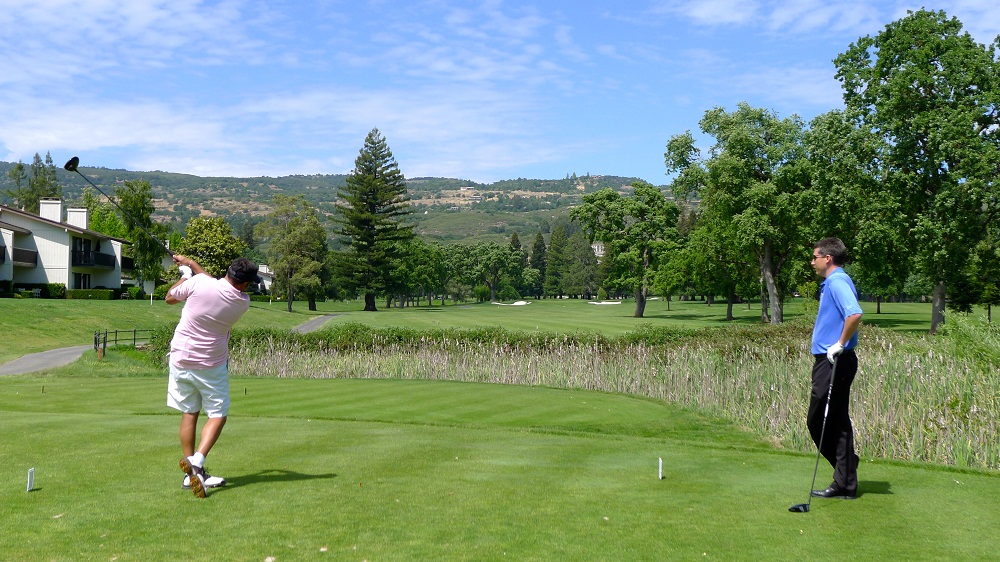 Answer to “Where am I?”: Napa Valley, California

Teeing off from the first hole at the Silverado Country Club and my Leica caught the ball mid-air.

Congratulations to everyone who answered correctly on the blog, Facebook and Twitter: Muhtadi, Don, Fidel, Anjalin, Emmanuel and Gerhard.

This is a two part Leica entry as I am on a three week filming assignment in California. In a fortnight, yes, I will still be in “The Golden State” but you may find that pinning me down will be rather more difficult.

I am on a diet, as I am desperate to lose 22 pounds as soon as possible. I have entered the 2012 New York Marathon and last week my doctor was quite clear; lose the weight now or forget running 26 miles.

So far on this trip, unfortunately, I have gained weight.

My first Napa location, after the 90-minute drive from the San Francisco Airport, was Yountville. This town has many claims to fame, the most important being that it is home to one of the greatest chefs in the world – Thomas Keller.

Back in 1994, Keller opened The French Laundry. This restaurant now holds three Michelin stars (for a fifth consecutive year) and he has a local empire that includes a culinary garden, bakery, a French bistro and a family restaurant. He put Yountville on the map and soon other chefs moved to Napa – attracted by stunning fresh produce and a hungry audience. Yountville currently boasts six, yes six, Michelin stars and in a town of less than three thousand people that is the highest concentration of “stars per capita” anywhere on Earth.

Yountville was named after George Calvert Yount in 1867. He is credited with establishing the first vineyard in Napa Valley. I have a weakness for red wines – Pinot Noir and Cabernet Sauvignon – so along with all this fine dining, I have to deal with all this wine too.

Wine has been produced in the Valley for around 150 years, but it’s only since the mid-1970s that it became a major player on the world wine stage.

During Prohibition the vineyards in Napa grew walnuts and olives, but after 1933 restarted growing grapes. With likes of expert winemakers Charles Krug and Robert Mondavi wine improved to such quality that at the Paris Fair in 1976, Napa produced two wines that were judged better than French ones! This started the revolution that has seen not only Napa producing some of the best wines in the world (Opus One) but also becoming the most visited wine-producing region in the world too!

I have been eating Michelin starred cuisine on a daily basis and drinking fine wines like it’s water. This leaves no time for exercise … Will I last another two weeks here? Only time will tell!