May was a historic month for Singapore’s politics scene. For the first time, a fair number of the opposition party were voted into the Parliament, which usually consists of members of the People’s Action Party. A lot of photographers were on the ground documenting the rallies, but photographer Darren Soh chose to be high up and away from the action to document the overall view of the scenes.

Trained as a sociologist, Darren chose not to write about images, but take them. He also contributes regularly to international magazines such as Monocle and Travel + Leisure South East Asia; he also conducts classes to train budding photographers.  Here is an interview with Darren regarding his latest project, Political Landscape(s).

Q: What prompted you to work on the Electionscape project?

A: The current work on GE 2011, titled “Political Landscape(s)”, is an evolution of the original project from the last general elections in 2006 titled “Electionscapes”. Then, I photographed single frame images on a medium format camera using film documenting political rallies in the run up to the 2006 Elections as landscapes, mostly done from a high vantage point. This time around, the approach hasn’t changed as much as the method, where I used a Leica S2 shooting images stitched together into collages, but more on this later. Basically, I wanted to photograph the run-up to general elections 2011 here in Singapore, but I did not want to do it a reportage manner, which would be the obvious choice for a subject matter like this. My photojournalist colleagues have proven to be more than capable of producing stunning images in that genre and I wanted to see the wider picture I suppose, which showed how the candidates, their supporters, the man on the street, were just parts of a larger picture. I thought I could achieve this by photographing the political rallies as site specific landscapes.

Q: Do you have any specific concepts in mind when you started shooting?

A: I knew I wanted to avoid moment type images, so in preparation for the project, I waited patiently for the authorities to release the venues for the various rallies and I did some virtual (Google Street View) and real life (driving and climbing) scouting of the sites to make sure I knew which high vantage points would serve me best for the project. Initially I wanted to do single frame images, but I really felt that I needed to exploit the resolution and sharpness that one could achieve from the Leica S2 so I ended up shooting collages.

Q: Which image of the Political Landscape(s) has the most significance for you?

A: To be honest, the images are all significant for me. They all show a slice of Singapore’s history in the making, but I think the images that I made on polling night through to the wee hours of the morning the next day as the results were being announced are most significant. I was plugged into live radio and could recall exactly what was happening and which results were being announced as I was shooting. 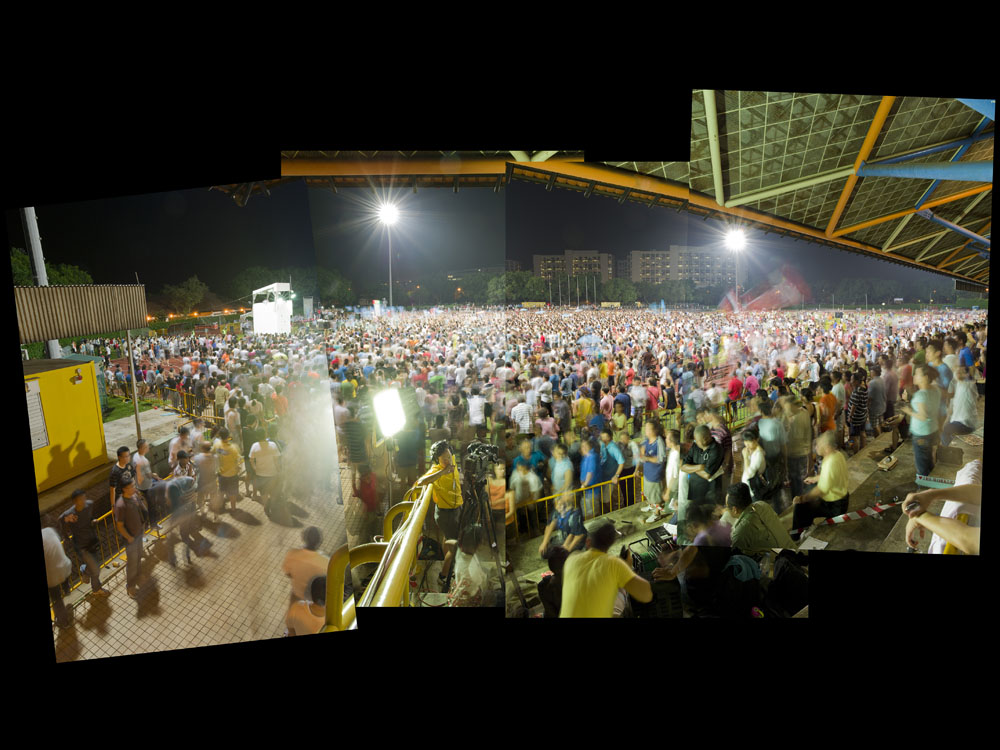 “Workers’ Party, just after the announcement of Aljunied GRC win @ Supporters Assembly Centre, Hougang Stadium, 8th May 2011, about 0230hrs” is probably one of the more significant of the images made on the 7th and 8th of May because it was made minutes after the Elections Department announced that for the first time in history, the ruling party had lost a Group Representation Constituency (GRC) to the opposition, specifically the Workers’ Party.

Q: Can you tell us a little bit more about your experience with the S2?

A: As someone who’s used to 35mm digital cameras, it took awhile before I got used to the relatively slower operating speed of the S2. However, I understand that amongst medium format digital cameras, the S2 is probably as fast as it gets! What I was thoroughly and unequivocally impressed with when it came to the S2 was the quality of the DNG files. WOW! is probably the best way to sum up my reaction. Even zoomed to 100%, the files retained so much detail and sharpness that I have the utmost confidence in making images that had lots of micro-details in them. Stitching a few files from the S2 together, I can get 8bit files of up to 1GB in size, which would yield prints of up to 3-4 metres in width, making these landscapes even more impressive if  they were printed.

Q: What preparation work did you do before you headed out to shoot each night?

A: Every afternoon I would wait for the police to announce the rally schedules for the following day and I planned my route in a logical manner. The rallies all took place at the same time from 7pm to 10pm in the evenings so essentially I had three hours to shoot as much as I needed every night. I tried to cover at least three rallies a night, but sometimes due to small hiccups (such as having to park miles away because there were thousands of people attending rallies) I could only shoot a couple. I had to be very focused and not shoot more than what I needed to for the images I had pre-visualised because I would risk missing the other rallies I planned to shoot.

Q: You’ve shot with various formats for different projects. Which format do you personally enjoy using most and why?

A: I am a believer in using the right format for the right subject matter. Having said that, I’ve been most comfortable with the square format in the past and many of my previous projects were photographed in the square format. However, with particular reference to “Political Landscape(s)”, I felt that the square format would not do it justice, as I began to shoot the rallies and realised I really needed to fill the frame(s) with the expanse of the ‘scape unfolding in front of me at every rally.

Q: Which photographer influenced your works?

A: I’m a big fan of Peter Bialobrzeski because we photograph very similar subjects and I really appreciate his sensibilities for approaching night photography. Other photographers whose work I really like are Todd Hido and Richard Misrach as well as two more Peters, Peter Granser and Peter Marlow of Magnum.

You can see more of Darren’s work on his website, www.darrensoh.com.