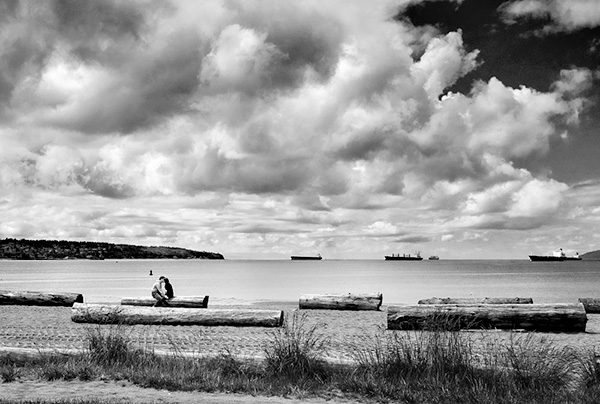 It began so innocently. These things often do. With my Leica M2 in hand, I was walking the street and scrutinizing the ordinary life that ebbed and flowed ahead of my purposeful gate. Many of these excursions are unremarkable, but every so often the sky parts and an improbable cluster of events intersect into a single moment of context, irony or geometry. These moments are what motivate my photography. These moments are the reason why I choose the cameras and lenses that I do, and why I practice the mechanics of my craft with a commitment more akin to a concert violinist than to the average photographer. 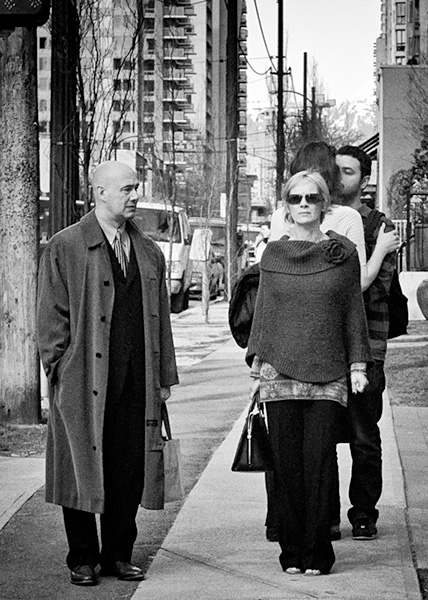 So on this fateful day, when the sky separated and the contrary elements converged before my eyes, my brain responded as trained. It ordered the muscles in my arm to begin lifting the camera to eye level. It quickly gauged the subject distance and instructed my left index finger to rotate the 35mm Summicron’s focus tab to a commensurate angular position. It measured the brightness of the scene and commanded my right index finger to slow the shutter by one stop. It then estimated the rate at which the events were converging, and directed that same index finger to rest upon the shutter release button and wait for the signal. BANG! The scene before me amalgamated into a meaningful whole and my brain fired off the climactic synapse — but the synapse that fired wasn’t the usual one. Instead of saying “release the shutter,” my brain said “why bother?”.

The moment passed, the sky healed and mundanity returned to the streets. The M2 sat pressed to my brow, its shutter still cocked and the frame unexposed.

“Hmmm,” I thought. “That’s odd.” Though I was somewhat bemused that I would purposely miss a shot, it didn’t weigh too heavily on my mind. The next day, with my Leica M9 in hand, I was back on the streets searching for another sliver of serendipity. Luck was on my side that afternoon, and it wasn’t long before a photo opportunity appeared. As the events converged before me, my mind instinctively guided my camera through its photographic ritual. BANG! The scene before me amalgamated into a meaningful whole and my brain fired off the climactic synapse. But, like the day before, that synapse didn’t say “release the shutter.” It said “Who cares?”.

The moment passed, the sky healed and mundanity returned to the streets. The M9 sat pressed to my brow, its memory card still empty.

I felt the blinds roll down over my eyes, and the inside of my head darkened. There is a fine line between taking thoughtful photographs and thinking about photography. And I had just crossed it. I had entered the crisis zone — a bottomless quagmire in which a disproportionate quantity of thought is expanded upon the “why,” and not nearly enough on the “who,” “what,” “when” or “where.” 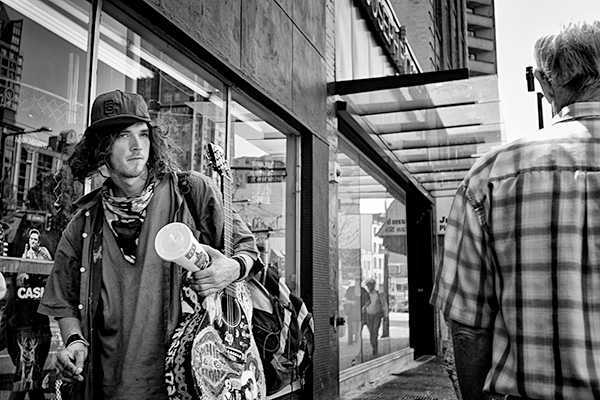 It’s convenient to blame my new self-doubt on a few rogue synapses but, truth be told, there is always a chorus of negative voices chanting in my head. Learning to deal with them is the key to creative survival — I can either ignore the voices or I can capitulate to their will. To choose properly, I must figure out whether or not the voices are correct.

In this case, I knew exactly why the naysaying neurons had staged a coup on my photographic impulses. It was because popular photography and my own photographic inclinations were diverging at the speed of light. So much of modern photography conforms to a similar dictate — long lenses, a cornucopia of color, the absence of shadow, a glossy sheen, a highly stylized concept and, if possible, a video sequence to tell the tale. So much of my photography is the opposite — wide lenses, an absence of color, a cornucopia of shadow, a grainy texture, a totally random occurrence and, if possible, a single iconic image to tell the tale. 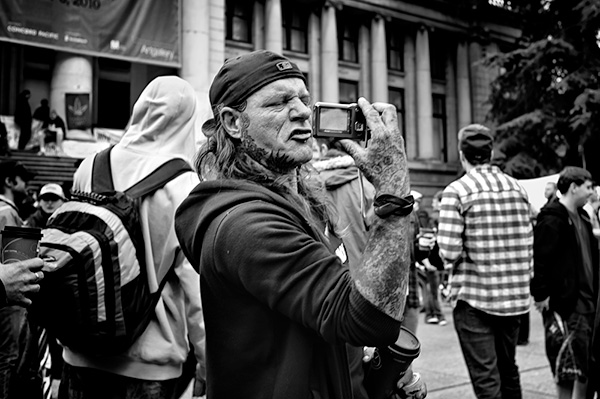 I concluded that the voices were likely right, and I should probably pack it in and dedicate myself to actually taking the sort of photos people like to look at. So I left the streets and began to contemplate a shift into “commercial” photography. To help hone my future direction, I spent days looking through fashion magazines, travel magazines, business magazines and numerous photography websites. What I saw affected me far worse than I feared — it rendered me completely disinterested in ever taking another photograph. I felt utterly dismayed, totally despondent, and completely detached from the new photographic reality. Didn’t they once prescribe lobotomies for this sort of psychosis? 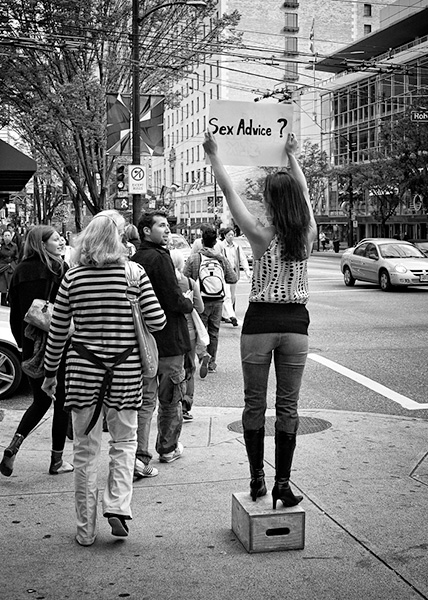 While Googling local asylums, I began to reflect on the myriad decisions that lead me to this point. For most of my life, I had been a songwriter and musician. It was my first passion and, up until I discovered photography 20 years ago, it was my only passion. Throughout the years, I forged my own musical direction and created the kind of music I wanted to hear. About a decade ago, I decided that satisfying myself and a few hundred loyal fans was pointless. So I spent the next 7 years trying to write and record music that I thought would have a broader appeal. As a consequence, I created 7 years worth of complete and utter crap — none of which was remotely worth foisting upon the world. Toward the end, I couldn’t even bother to finish writing a song, much less record it. Eventually, I completely lost sight of myself and my own likes, and I stopped writing music altogether.

I was foolish to attempt musical conformity, but foolishness is the mother of wisdom. As I stared into my future as a photographer, I saw ominous parallels between my musical passion and my photographic passion. We are who we are. If we’re lucky enough to have a vision and to feel passionately about it, then we owe it to ourselves to persevere. Slavishly adapting my style to match current trends would likely bring me more admirers, but they wouldn’t be my admirers — they would be the style’s admirers. I’d rather have detractors. When we try to be something we’re not, we’re destined for mediocrity. When we’re true to ourselves, we give ourselves a chance to transcend it.

So a couple of days ago, I blew the dust off the Leicas, and went back on the streets. A woman whose pants were too short was walking toward me. Simultaneously, a man whose pants were too droopy was walking away from me. Somewhat rusty, I wrestled my camera into position and paused, waiting for the moment. BANG! My brain, still accustom to self-doubt, fired off the climactic synapse: “Who cares?” it asked at the critical moment. “I do!” I answered, and plunged my finger onto the shutter as if I were driving an icepick into my prefrontal cortex. 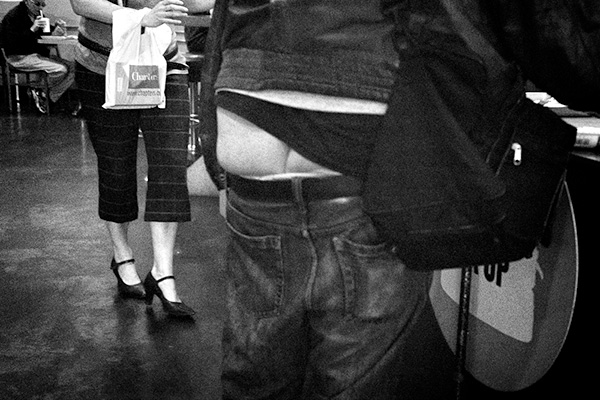