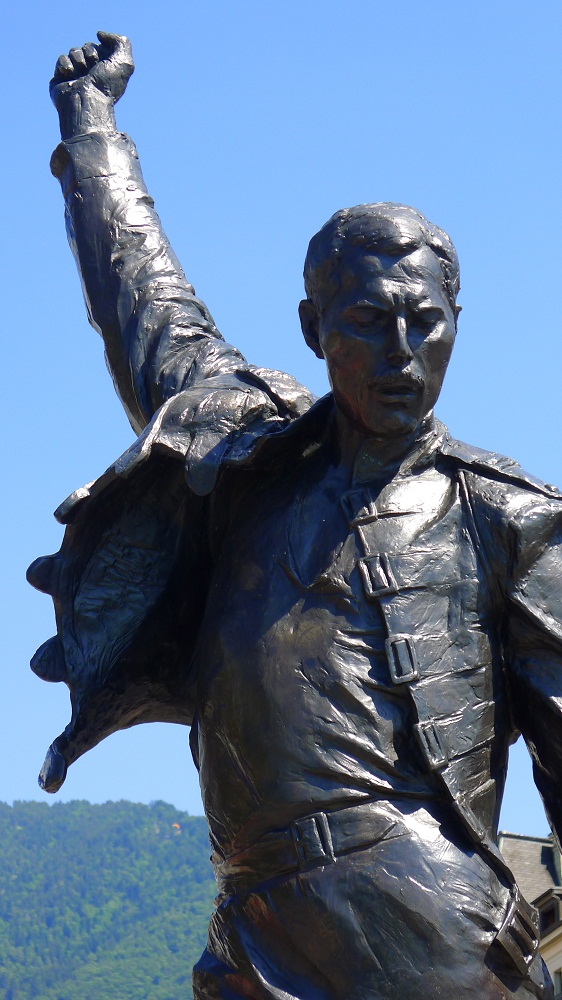 Answer to “Where am I?”: Montreux, Switzerland

On 24 November 1991, the world mourned the loss of one of the greatest rock stars in the history of music, Freddie Mercury.

Queen recorded an album at Mountain Studios (now a bar) in Montreux in 1978 and Freddie loved the area so much, he bought an apartment in nearby Territet which overlooks Lac Leman (Lake Geneva).

On November 251996, this three metre statue of Freddie was unveiled by his father and the opera star Montserrat Caballe (their duet “Barcelona” was the theme song to the Olympics in 1992).

Montreux hosts an annual Jazz Festival. The likes of Miles Davis, Prince, Sting, David Bowie and Deep Purple have all appeared at the 16-day event. Brian May performed in 2001.

A couple of years ago I was filming in Singapore and had to make a choice whether to film the opening of a new luxury boutique that belonged to a world famous, but incredibly dull and unoriginal brand, or MINT, the Museum of Toys. As you can guess, I opted for the latter.

A few weeks later I was telephoned by an annoyed PR rep demanding an explanation for why I had made my choice. I asked a question, “How much money would you give me to return thirty years of your life?” She replied, “Everything!” I then went on to explain that the toys I had seen in MINT reminded me of my youth and just for a day, I was five years old again! It was an amazing feeling. Though disgruntled, she accepted my argument.

In 1931 at the Clinique la Prairie in Montreux, Professor Paul Niehans starting injecting patients with a serum made from lamb-foetus liver cells. He found that this elixir extended life when it hit specific growth areas in the body. He called it “Revitalisation” and in 1953 when he treated Pope Pious XII, the treatment became international news. It wasn’t until around three years ago that the injections stopped. Now just two spoonfuls of liquid are administered and it lasts for two years. I have spoken to people who have had the treatment and they noted a positive change in their stamina and general healthiness.

Last week I was at CLP. Was I tempted to join the ranks of famous pop-stars, politicians, captains of industry and drink from the spoon of life? Yes, but I didn’t!

I felt too young to have the need to extend my life. Oh and I don’t have the twenty odd thousand dollars spare to fund the treatment.

I have put the Aston Martin on hold though and have started saving! In twenty years time when climbing stairs becomes an issue, CLP may just be the answer!