The Singled Person: An Interview with Peer Kugler

The Leica camera Blog Uncategorized The Singled Person: An Interview with Peer Kugler

“Click, clack” goes the slide projector. Well, eight of them actually. They are currently set up as part of the 7th Annual Wiesbadener Fototage until 25 September. “The Singled Person” actually consists of eight photographers from around the world: Michael Ackerman, USA; Morten Andersen, Norway; Lorenzo Castore, Italy; Thorsten Kirchhoff, Germany; Peer Kugler, Germany; André Lützen, Germany; Hisashi Murayama, Japan and Filippo Romano of Italy. The installation is a traveling show that displays the work of the aforementioned photographers using eight old-fashioned, unsynchronized slide projectors. This project been displayed at photography festivals and shows around the world. We put together our own slideshow of the photographers’ images in the video above and you can see photos of the installation below. We also had the chance to talk with Peer Kugler, photographer and organizer, about this unique installation. 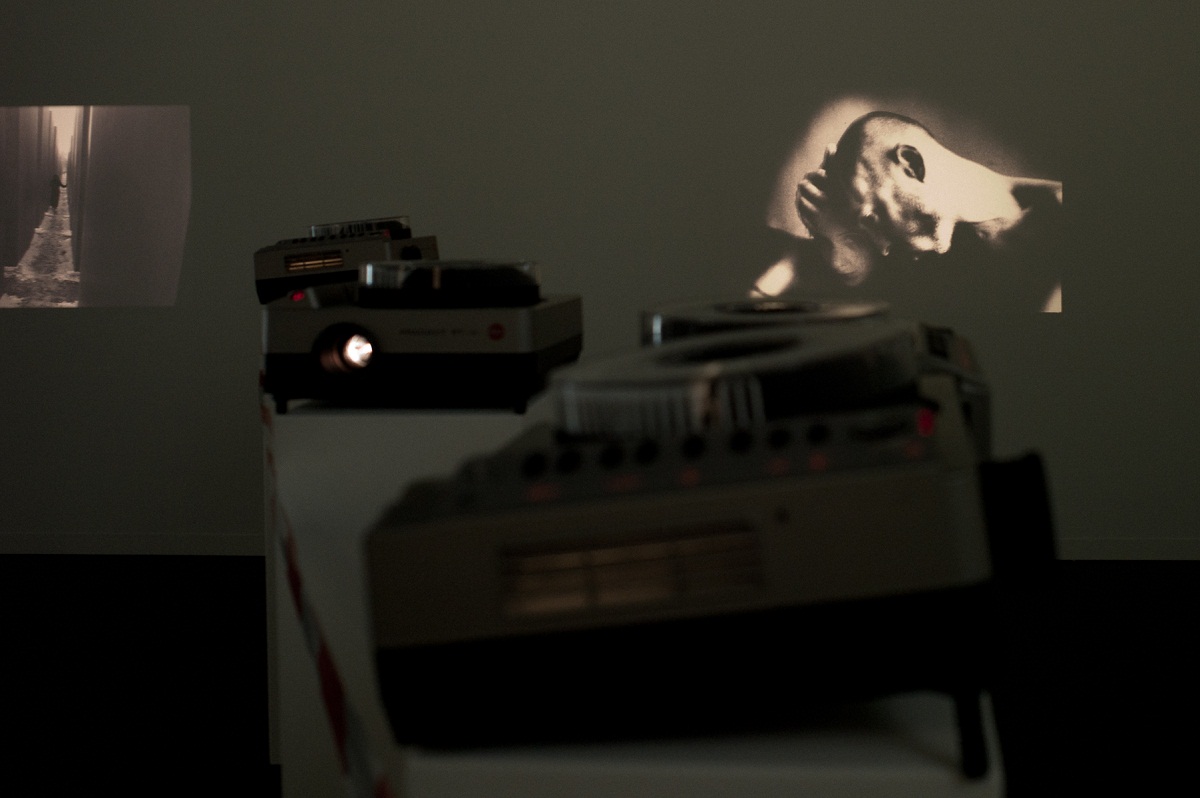 Q: Can you describe “The Singled Person” project?

A: “The Singled Person” is a projection showing the work of eight photographers. There is one slide projector for each photographer. The projection is more like an installation, rather than an exhibition. At any point you can always see three or four screens at once. Because the projectors are not synchronized, it’s never the same. For example, sometimes the works of three photographers synchronize and tell you a story, but then they run apart again and each one is telling its own story again. This happens because each series has a different amount of slides in the tray. One has 25 slides, another 28 and another 32. Also, the projectors’ timers all have a slightly different setting. This makes the projection very organic.

Q: What does “The Singled Person” mean?

A: This is the most difficult question to answer. The singled person can mean many things and it’s good that it does. For one, it’s about the photos we show. Most of them have a sense of loneliness, whether it’s what the image shows or the feeling it provokes. I think I speak for all of us here, it’s very important to take photographs which provoke a feeling, rather than to explain something. Most of the photography we see is just explaining something, but photography can go beyond that and can also provoke feelings. That might also be the feeling of alienation, which brings us back to the singled person. It could be the photographer; no matter how intimate or close he is to his subject he remains alone and is, again, the singled person.

Q: How did the project develop? Particularly how did the photographers meet one another?

A: Most of us have a shared connection through the International Center of Photography (ICP) in New York. Five of us, myself included, studied there and even though some of us attended ten years apart, we somehow got to know each other. Michael teaches workshops and also taught at the ICP. Thorsten was a student of Michael’s when he held a workshop in Berlin some years ago. Lorenzo is represented by the same gallery as Michael in Paris, Gallery Vu’. With the type of photography we do, somehow you always meet photographers that share a similar vision. It’s like how Anders Petersen calls it, one big family. When we started with this project at the Triennial of Photography in Hamburg, there were six of us photographers. Originally we wanted to do an exhibition with prints, but because of the space we had in Hamburg we decided against a traditional exhibition. If six photographers each put up about twenty prints, you’d quickly get overwhelmed with the images. Therefore we went with projectors. This way we had only six areas with images on the wall. When we first set up everything, we surprised ourselves with the effect of the projection. We stuck with this concept and “The Singled Person” has now grown to eight photographers.

Q: Is it always the same set of photographers?

A: The group has changed over the years and it will likely change again. When we started, we were six German photographers, but right after the first show, Morten joined the group and we started to become more international. Now we are three Germans, two Italians, one American, one Japanese and one Norwegian. Over the years we have received a few requests from photographers who would like to join, but we feel that eight projectors is really the maximum. The installations would require a lot more space and again you would be to overwhelmed when you enter the room. It is already overwhelming as it is.

Q: Do you target museums for the shows? If so, why?

A: We are very open to showing at different places. For us it’s only important that we show it as a group and in one room. We were asked a few times to show it spread out among two or more rooms, but it would destroy the atmosphere of the projection so we declined. Except for the KunstSalon in Berlin, we have only showed the projection at photo festivals, but this more out of a coincidence than our intention. We would love to show the projection at many different places and not only in the context of the photo world. Over the years, we have managed to touch many people with the projection. Many of the compliments we have received, have been very moving. I think that’s what it’s really about, to reach people with our photography and the more people we can reach the better it is. 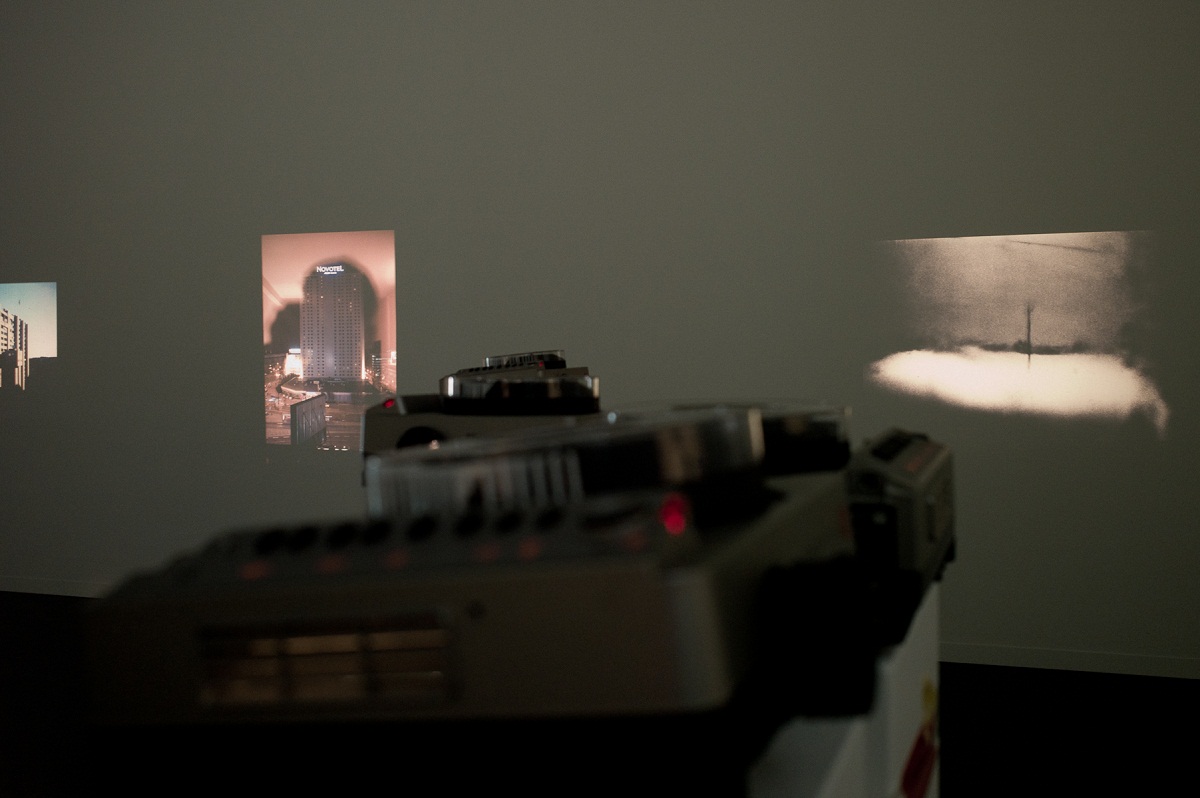 Q: In the era of the computer, why did you choose to use slide projectors instead?

A: It was a very easy choice. First of all, we all like the sound of the projectors. The magic “click, clack” is very similar to taking a photograph. There is no music for the projection, just the sound of the machines. If you stand in the room for awhile, you will discover that the sound is very meditative. It’s also a matter of quality. The quality of a projected slide is still much superior to any video projection. With video projections, there is the issue of video compression especially with still images; it’s much more difficult to get a result as good as a slide. Lastly, slide projectors are much easier to set up. You just have to plug in the power cord and that’s it. With video projectors, you have a lot more to set up and take care of. What surprised us many times was how quickly people have forgotten slide projectors. Several people have asked us what kind of projectors these are. They are surprised by the sound of the “click, clack”. We are also very grateful for the support Leica has given us over the years. Leica lent us the Pradovit RT-M projectors for most of our projections. Last year we bought ten of them and we are very happy to have them, before they disappear completely. It might surprise you, but all the slides are made digitally. The originals are all negatives and in my case there are several digital images taken with a Leica M9 and X1. The negatives are scanned and adjusted then output on a digital slide film recorder. The quality is really astonishing. You can’t tell which pictures were taken digitally or analogue.

Q: What are the stops for “The Singled Person”?

A: Right now, we don’t know. We will try to have another projection toward the end of the year in Berlin. Next year we will once again apply for festivals and it will depend on who wants us to show it. One thing is for certain, as long as people like it, we will continue to show it.

You can see the projection on display at the Wiesbadener Fototage until 25 September; visit www.galerie-lichtbild.de/wagnis for event details. You can also read more about the projection and photographers involved in “The Singled Person” by visiting their site, www.projektoren.net.