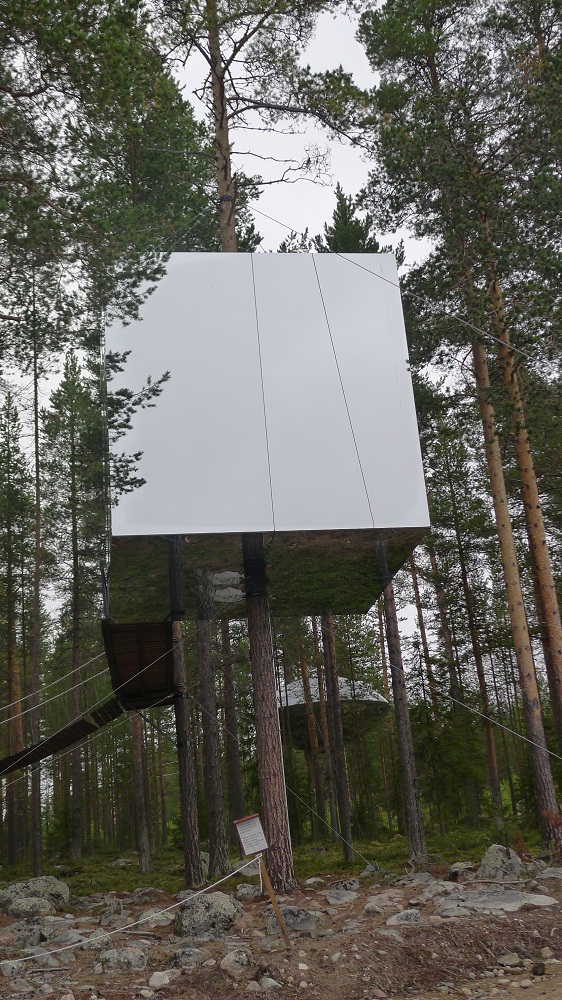 Answer to “Where am I?”: Sweden – at the Treehotel in Harads, Lulea.

Congratulations to everyone who answered correctly on the blog, Facebook and Twitter: Andrew, Mattias, John, Robert, Michael, Khrystene and Gabriel.

Having pioneered the ice hotel concept, those canny Swedes – known for their cutting-edge design – have now come up with a unique permanent hotel, set in a dense pine forest in Sweden (a thousand kilometres north of Stockholm).

The Treehotel features five tree houses (with twenty more on the drawing board):

Run and owned by a lovely lady called Britta and her husband Kent, the Treehotel has become the talk of the hotel world. The couple invited Swedish architects to design these tree houses in an attempt to help adults reach back to their childhoods! It works!

My stay in the Mirror Cube was truly awesome. There is no television, room service or shower, but enough heating to protect from a cold Swedish winter (it can get down to minus 35 degrees), a toilet that super-freezes bodily extracts, and a bottle of water with which to brush your teeth!

The architect wanted the integrity of the cube to be maintained and insisted that no pipes would pierce the box. Only a small electrical wire snakes up the tree trunk feeding the heating, lighting and a small kettle!

While the Treehotel was basic but fabulous, my grand suite at the Grand Hotel in Stockholm was fully-furnished with HD wide-screen televisions, unparalled views of the city, a king-sized bed, not one but two chaise lounges, dining room, kitchen and heated bathroom floors. Oh, and still rather fabulous!

In Harads, I ate moose burgers, reindeer stew and even brown bear salami; whereas in Stockholm, I dined in Michelin-starred restaurants.

My filming trip to Sweden was totally at different ends of the spectrum, but one of the most memorable of my life.