Part of the wonder of taking photographs is discovering what kind of photographer you’ll become. Not that you should limit yourself, but inevitably you’ll be drawn to certain subjects, camera angles and lens choices. You also learn, when you show your photos to others, which kinds of photos strike a chord with other people. This may seem backwards from the romanticized notion that artists know what they want and then proceed to make it happen. In my experience — and probably the experience of most of us — photography is a voyage of discovery where you also learn something about yourself.

For me, it turns out I’m well-suited to wide-angle shots that emphasize diagonal lines and shapes. So working backwards, I’m trying to understand, not only how I may have arrived there, but more importantly, why geometry, perspective and a finely balanced composition are important to a sense of aesthetic satisfaction. Why do we find these things pleasurable when all the elements line up just so? For me, composing a shot is a gut-level reaction to what I see in front of me. I don’t carry a tripod and I don’t spend a lot of time setting up a shot or waiting for something to arrive that might complete the composition. If the shot or angle isn’t right, I just move on.

Of course, there are downsides to this approach, but the upside is the surprise you often feel when you process your photos. More often than I should reasonably expect, all the elements come together to create a memorable image. It can’t just be a coincidence. I prefer to think that by shooting mostly on autopilot, you’re able to tap into your unconscious and instinctively frame the shots that will resonate with your deeper aesthetic preferences. In other words, I don’t go looking for interesting diagonals, but I do seem to compose my shots in a way that emphasizes them. Giving into these deeper preferences could be a key to developing a photographic style. Turn off the rational mind and allow your instincts to guide you through the process — or to quote Obi-Wan Kenobi, “follow the force, Luke.”

So what have I learned about using diagonals as a compositional element? In our daily lives, we see vertical people, trees and buildings set against a horizontal plane. A strong diagonal tends to challenge — and potentially upset — the stasis and balance of these commonplace visual elements. Diagonals stimulate the brain because they ask us to reassess what seemed to be a simple composition, as we consider that it may require a more complex compositional balance. 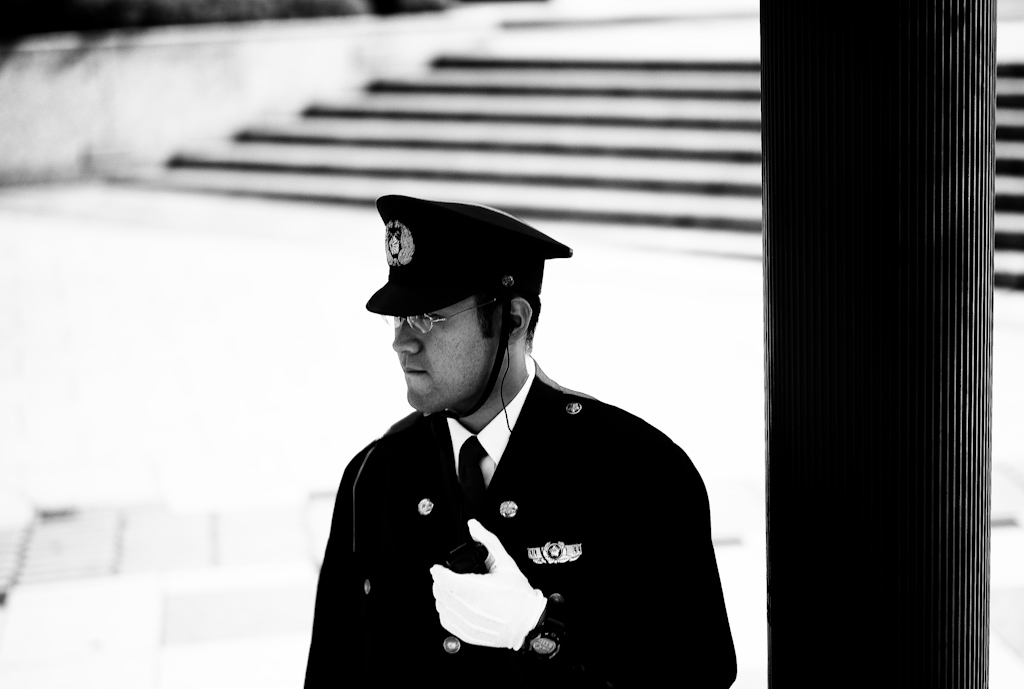 Photos that have a diagonal component sometimes seem to vacillate between simplicity and complexity. For example, with the photo titled Tokyo Policeman, the diagonal steps in the background and the white-gloved hand help to break up the monotony of the vertical pole and policeman. There the effect is fairly subtle. 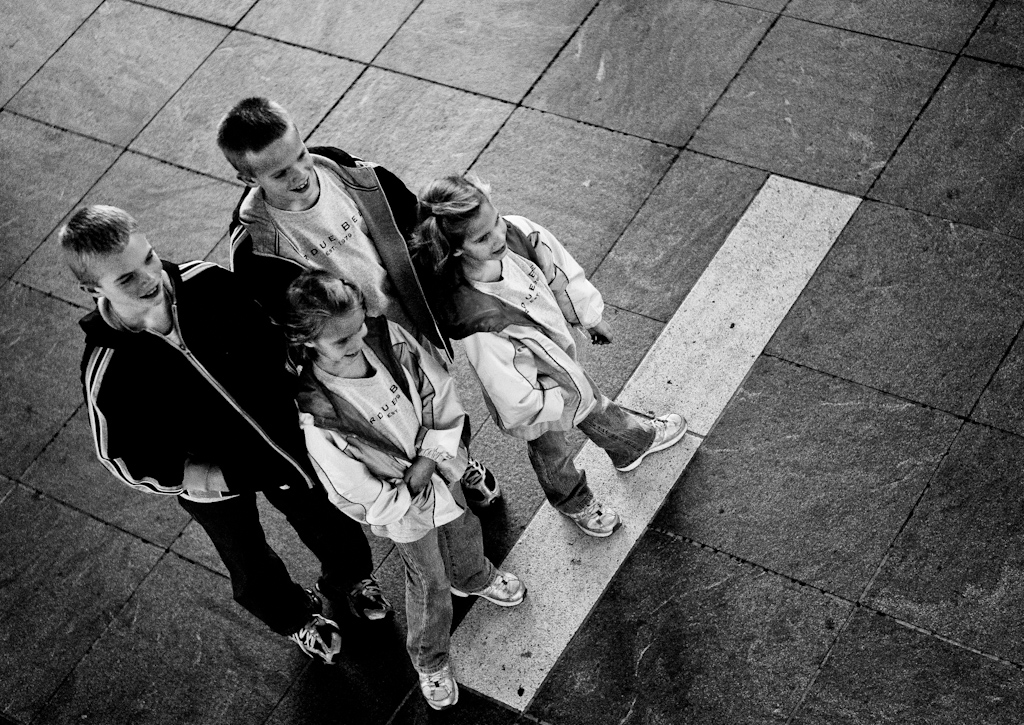 With the photo titled Say Cheese, the diagonal component is far from subtle. Because the diagonal lines are so extreme, they transform a clichéd photographic subject into one that is visually striking.

Wide-angle lenses can greatly emphasize the diagonals that we see around us each day. And with a more severe wide-angle perspective, a diagonal line or shape can be a powerful compositional element, especially if it collapses the composition from what seems to be a three-dimensional space into a two-dimensional space. 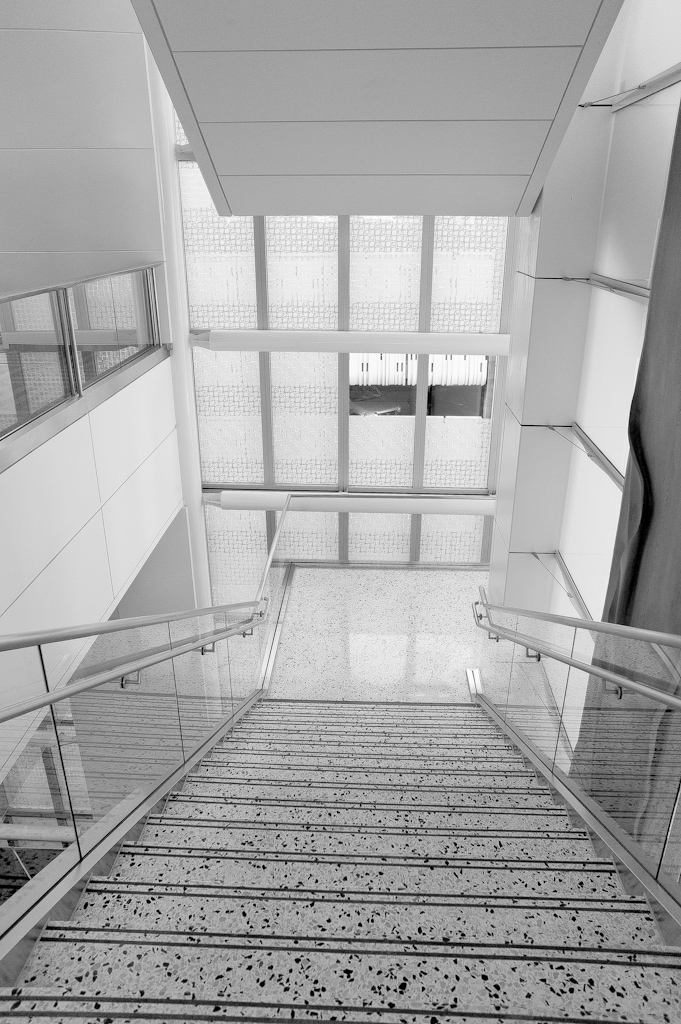 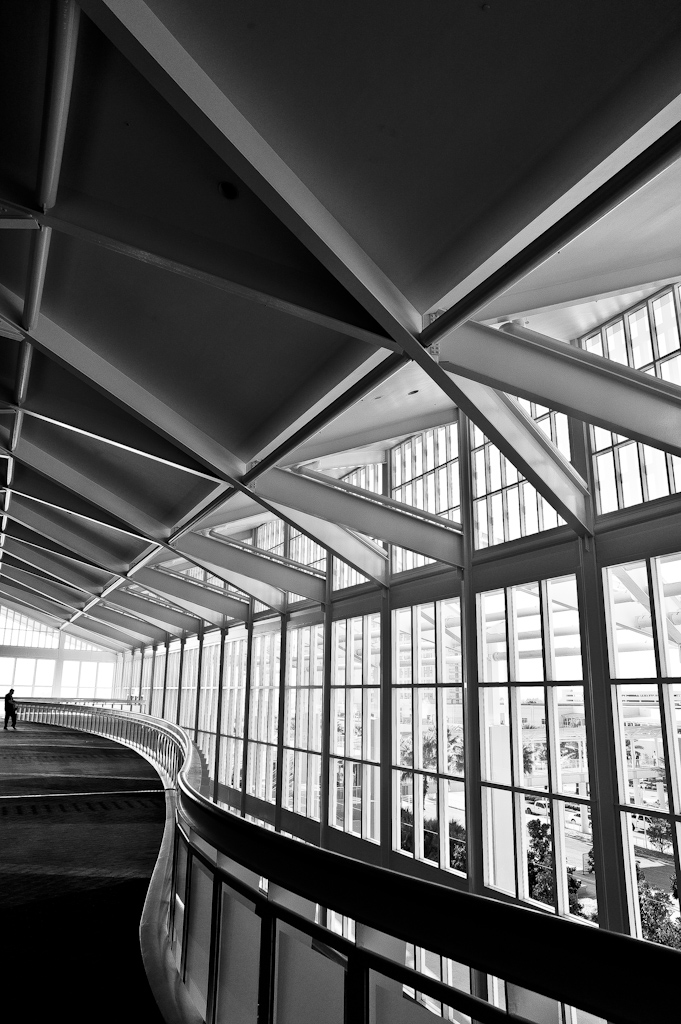 That’s what happens in the photo titled Moscone Center Stairwell. The many lines and forms that make up the staircase are effectively flattened into the same visual plane, alleviated only by a small window that visually breaks through the confined space. The diagonal lines point to and emphasize that small window. Similarly, with the photo titled Curved Platform, the curved and diagonal lines seem to point to and emphasize the small figure on the left. Because diagonal lines are often unexpected, we assume that they may point directly to the main content of the photo. I didn’t crop this image to create this composition. It just happened as I pointed the camera and looked through the viewfinder.

One big advantage of a rangefinder system, such as an M9, is the ability to see outside the frame lines without having to physically move the camera. If you see something interesting just beyond the frame, you can then shift the camera to include it within the frame. With a DSLR, you usually see only what the camera sees. You lose the ability to make this kind of last-second gut-driven composition.

I don’t consider myself to be an especially talented photographer, just one who is open to making the most of what is unfolding in front of me. We all have our preferences, which are likely to be reflected in our photos. We can only hope that what we create has some resonance for others and that when we follow our instincts, good compositions and interesting content will naturally flow.