Piotr Wyszyński is a young Polish photographer who has been photographing for six of his 20 years of life. He started photographing school trips and family events at age 14 and he soon began leaving class to wander around Krakow with his camera, chatting with and photographing the locals. He would also often catch a movie before noon when the tickets were cheaper. These school day adventures would soon develop into a passion for film, both the photographic medium and motion pictures. Currently studying at Krakowska Szkoła Filmowa (Krakow Film School), he’s able to explore his two passions of film and photography, which he hopes to transition to a successful career. You can read part one of our interview with Piotr and here we further explore his fascination with and passion for photography.

Q: You mentioned that you’re planning to switch to a Leica MP and X1 from the digital and 35mm SLRs you’ve been using. Aside from their small size and unobtrusiveness, what characteristics of these Leicas do you think will be beneficial in your type of shooting?

A: I think the answer is partially already included in the question. Apart from its unobtrusiveness and portability, the X1 is free from unnecessary features. I really like the idea of one knob and one ring for time setting and aperture. That should help me focus more on photographing because I believe Leica’s gear is more predictable.

Q: All of your images that are now posted on the Leica blog are in black-and-white. What is it that attracts you to this classic medium and why do you intend to continue using both film and digital capture?

A: It’s the topic that determines the use of colour. Taking photos in black-and-white allows the viewer to focus more on the shapes and lines of the picture. However, sometimes using colour is “justified” — it more accurately reflects the  idea behind the picture. 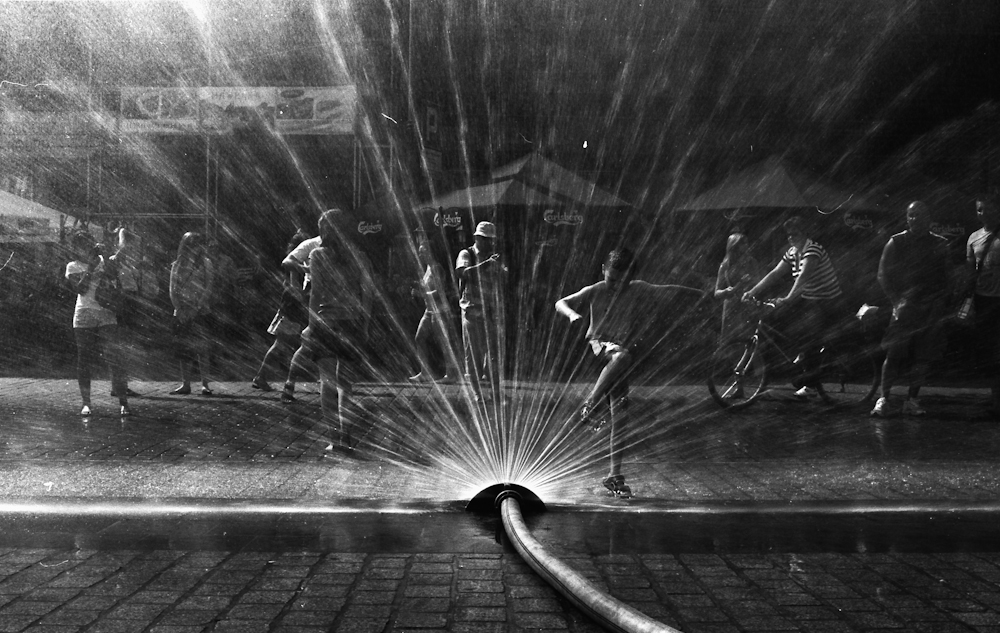 Q: Your iconic image of water streaming out of a hose in a sunburst pattern while children are playing in the background has a timeless quality — it could have been shot 50 years ago or yesterday. How did you come to take this compelling shot and what do you think it communicates to those who view it?

A: I took it on a very hot day in summer when I was walking through Cracow’s Main Square. What drew my attention was a long hose, installed by the city government and a large group of people using it to refresh themselves. Instantly I thought that thanks to the specific effect which you get when photographing on film, the visual characteristics of my photo will be similar to those more “old school” ones. Graphically, I also find the composition of this picture interesting – it brings the viewer closer to the feeling of a hot summer day in the city, which is a timeless feeling. 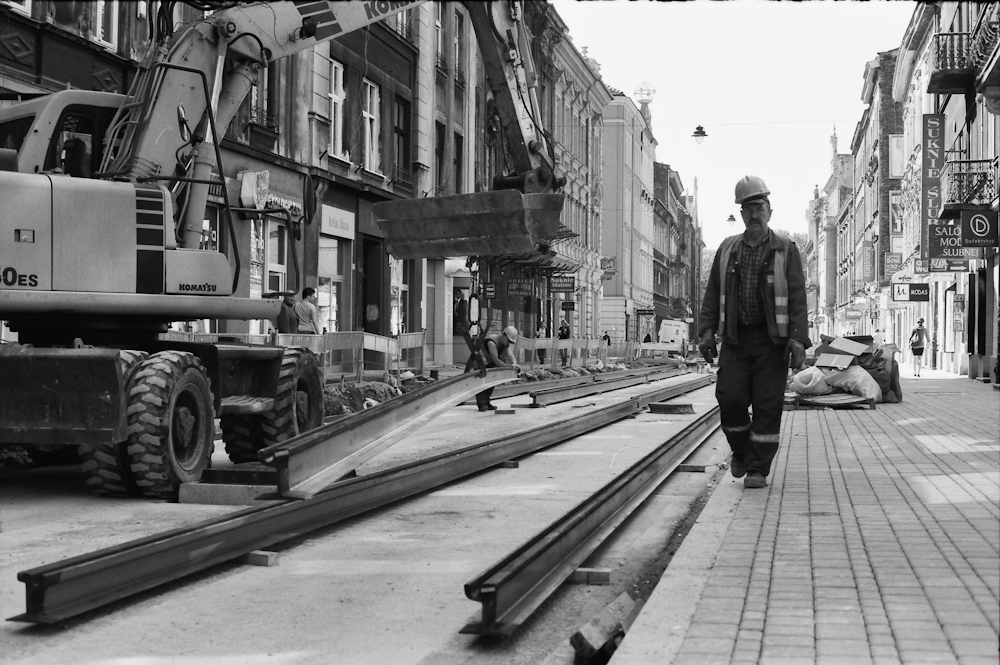 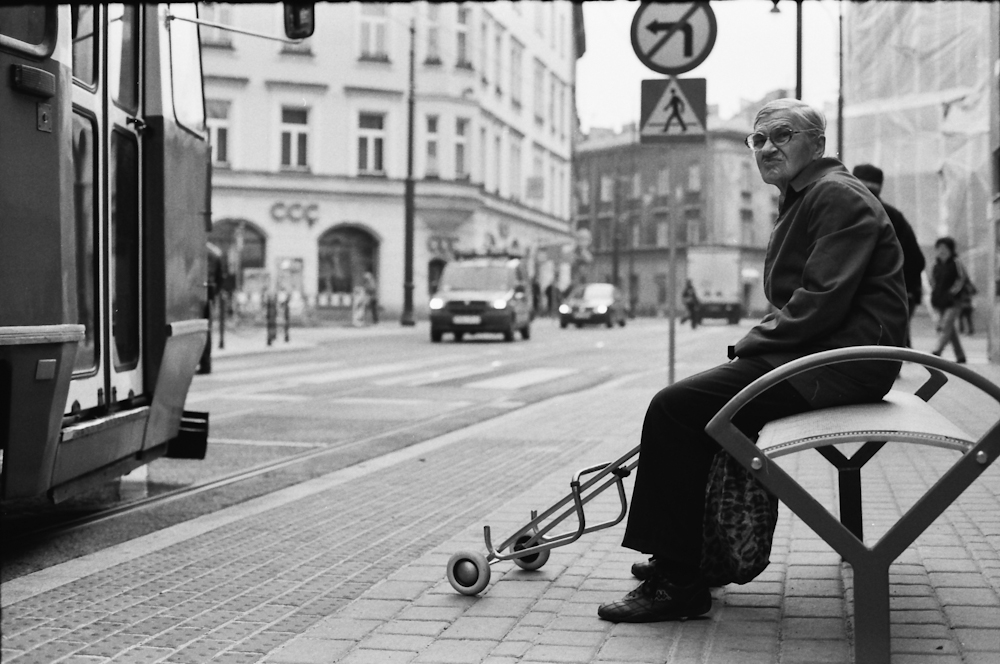 Q: Two of your Leica blog images, one of a woman sitting on a bench with a walker or cart extended in front of him and another of an iron worker with uninstalled rail sections extending into the foreground, are both examples of low-angle shots that make effective use of space to convey a sense of being there. Was this a conscious decision and can you say something about your technique in composing pictures?

A: I see an interesting detail and I try to make it somehow more special than it really is. Let’s take, for example, the picture with the worker. I saw a man with a little light tilt helmet and intuitively, I searched something in contrast to his helmet, which, in this particular situation, was the rail tracks. To make them even stronger, heavier and to underline the curve of track, I went for a low-angle shot and I think it worked out fine. It’s the same story with the other picture. The main topic was an old woman’s face and I tried to photograph her with the matching background in a way in which the latter would not distract the viewer’s attention. I look at the scene like on an abstract painting and convert every object to lines, spots and very simple geometric shapes. This helps me make easily change the composition. 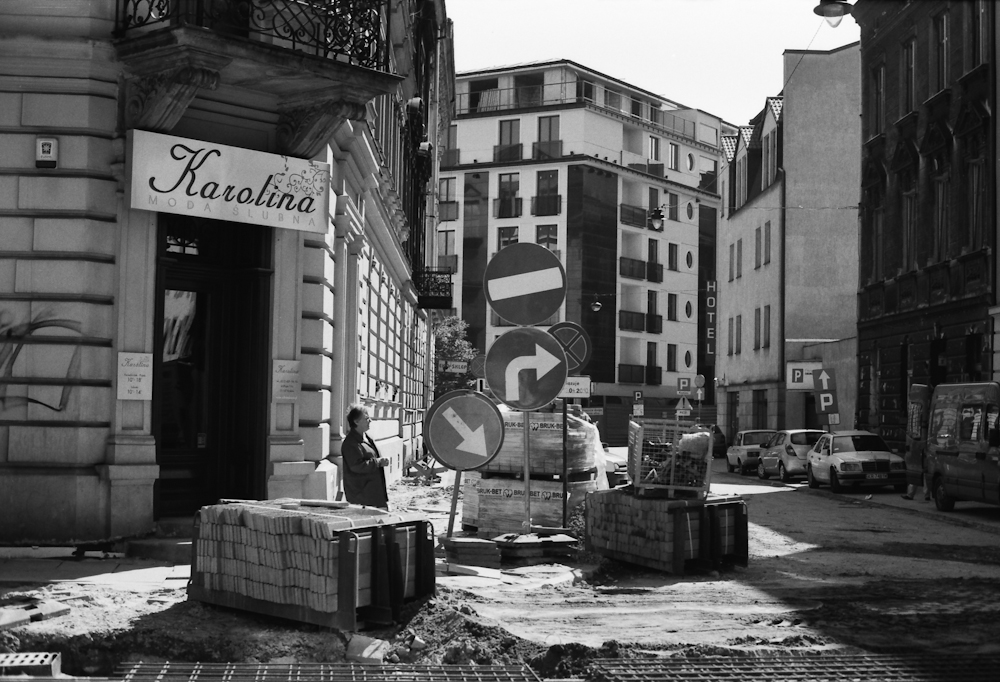 Q: Your enigmatic cityscape with a lone woman near the center, a street under repair, a confusing array of graphic street signs in the foreground, and an almost cubist array of buildings in the background seems to be a statement about the turmoil or disintegration of urban life. However, it is also almost comically ironic. What motivated you to take this picture and what did you intend to communicate to the viewer?

A: How you interpret it, is one way to see it.  In the picture you can also spot an old woman, who seems to be confused – she may feel lost in the modern world, so different from the one she knew in her youth. That scene is what inspired me to take the photo: on a chaotically renovated street, next to signs that contradict each other, stands an old lady who seems lost.

Q: You mentioned being inspired by the work of Cartier-Bresson, Weegee, Robert Frank, and Avedon. What do you think you learned from them and how had it influenced your own work?

A: I suppose they got me thinking; thinking about what might happen around me and how to compose people to make a perfectly ordinary scene more attractive for the viewer. But the most important lesson from all those great shots was that I learned how to choose which of my pictures is good and why. 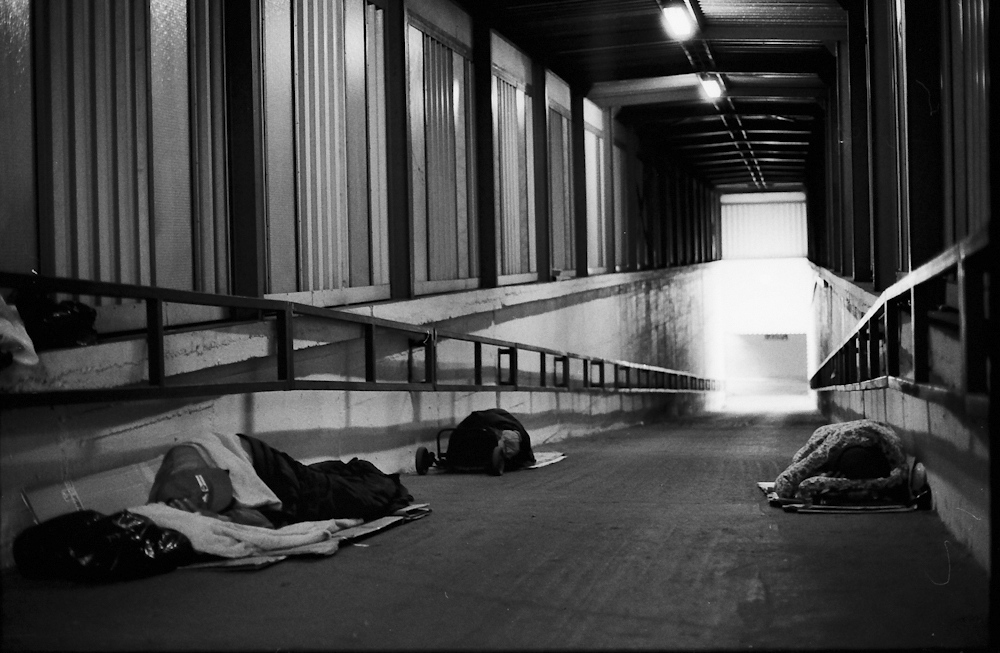 Q: Your photograph of (presumably) homeless people sleeping in a covered passageway has a quality of empathy, but also of detached observation because of its strong graphic elements. What were your feelings when you took this picture, and what, if any, is its underlying message?

A: No, there isn’t any underlying message. I took another picture which can be considered rather as poorly looking image, but in front of this passageway stands a sign that reads “Caution” and I think that says a lot more. For me, it represents the attitude of society towards the homeless, junkies and other outcasts. There are many pictures of homeless people, because  it’s easy to photograph a man who doesn’t have anything and therefore has nothing to lose. That’s why I usually avoid choosing them as subjects, but then I thought this picture could somehow be different. I tried to capture that they are hurt and lost, but still regular people.

Q: You note that simplicity of the Leica stands in stark contrast to that of a typical modern camera that you wryly dismiss as “a multi-functional soulless object with millions of megapixels.” Can you say something more about that elemental quality of the Leica that you find so appealing?

A: From the beginning up to today, the camera has remained almost the same. It has a lens with aperture, a body with shutter and a light-sensitive sensor. For many years, major companies have been selling the same product with new features, which they are really just duplicating. For me, putting modes such as auto-creative, smile-detecting or complex white balance in semi-pro or pro cameras is just stupid. I understand that maybe not everybody who’s taking snaps on vacation wants to know how a camera takes a picture, but everybody who wants to make the picture – art – should know the basics. Also, if you are shooting raw you can ignore half of the options in your camera, because almost everything is adjustable in post production. Leica seems to be only company which focuses on improving the basics like shutter noise or image quality that is given by their lens. That’s why it’s a perfect tool for people who love taking pictures and not just playing with their cameras all the time.

Q: How do you see your work evolving over, say, the next 3-5 years? Have you considered exploring any other genres such as portraiture, nature photography, architectural photography, etc.?

A: I have no idea in what direction my work will advance. Probably because I still have no clue how my life might turn out, but I would definitely like to explore portraiture, photojournalism and maybe fashion photography – practically everything what has  something to do with man and man’s body.