Krystian Maj: A Leica Guy In Every Sense of the Word, Part One

The Leica camera Blog Uncategorized Krystian Maj: A Leica Guy In Every Sense of the Word, Part One

A young Polish-born freelance photojournalist based in Warsaw, Krystian Maj, 34, works for Leica Camera in Poland. In his role as a photographer his mission is revealing the truth of social conditions by documenting significant events in Europe, especially in Poland and other post-Soviet states. Fluent in English, Polish and German with a working knowledge of Russian and Arabic, he describes himself as a “freestyle coffee junkie” on his Google profile, but he is very serious about his work, which has appeared in many European publications including South Journal, Look magazine and DSD among others. He currently collaborates with Reporter AF, a news agency. Here Krystian shares his story.

Q: How long have you worked at Leica and how did you come to work at Leica?

A: I’ve worked in many places in Poland and elsewhere, but after a few years I realized I was really longing for a job in the photographic industry that offered something more, something special. Working for Leica has allowed me to be in contact with the best photographers, work in a non-corporate environment and be part of the magic. I mean every Leica camera and lens is handmade, every single part has its own history, and it’s all actually made by people, not a soulless robot.

Q: What camera and equipment do you use personally?

A: I have over 20 cameras on my desk, so it partly depends on the project I’m working on; the other factor is my mood at the moment. I use a 4×5 monorail, a 6x6cm SLR, a few Polaroid cameras, some 35mm compact cameras, Nikon/Canon SLRs, and, of course, my favorite Leica gear, an M9 and an MP — the best of the best. They’re small, almost invisible compared to most of the others, always reliable and, of course, the image quality is outstanding! You can take your Leica camera, two or three lenses, slip it all into your jacket pockets and that’s it — you’re ready to go. Thanks to this simple method your camera exists only when you want it to. When you have to run, or a challenging situation arises, you don’t have a huge photo bag on your shoulder, you don’t look like an expensive Christmas tree, but you’re ready to shoot in an instant.

Q: What role does photography play in your life?

A: Aside from my personal projects I also work as a photojournalist for a major news agency so I guess you can say that photography is quite a serious part of my daily life both personally and professionally.

Q: When did you first become interested in photography as a mode of expression, an art form, or as a profession?

A: I’ve always been attracted to visual images, but never had any skill in painting. Maybe that’s why I started to think about exploring photography. Honestly, I have no idea what motivated me to buy my first camera, but immediately afterward, when I had my first roll of film developed I knew it was destined to bring about big changes in my life.

Q: Did you have any formal education in photography, with a mentor, or were you self-taught? Was there a photographer or type of photography that influenced your work or inspired you?

A: I’ve taken a few courses and I almost earned a bachelor’s degree in fine art photography, but I’ve gained most of my knowledge about photography by actually taking pictures myself and studying the works of others. I remember I was so hyped when I discovered the Magnum album showcasing the work of Bresson, Dworzak, Capa, Chim. “My God, I want shoot like those guys!” I said to myself.

Q: What genre are your photos?

A: I guess I’ve tried a wide variety of photographic genres, but photojournalism and reportage are what make me feel the best. Like every Leica user I admire good street photography and shoot in this genre from time to time as well. I’ve always wanted to learn how to do portraits, for example, like the great Polish photographer Jacek Poremba. I’ve got no precise idea how to achieve this, but I keep trying!

A: Leica? Those beautiful cameras with square lens hoods that everyone around tells me are the best of the best? How could I not want to try them for myself?!

A: It’s not a hobby, it’s not a job — it’s a way of life. I want to be present when something important happens. I want to document it, photograph it in my own style. I’m a terrible speaker so I think in the end it’s a good thing that I can tell stories with my images. 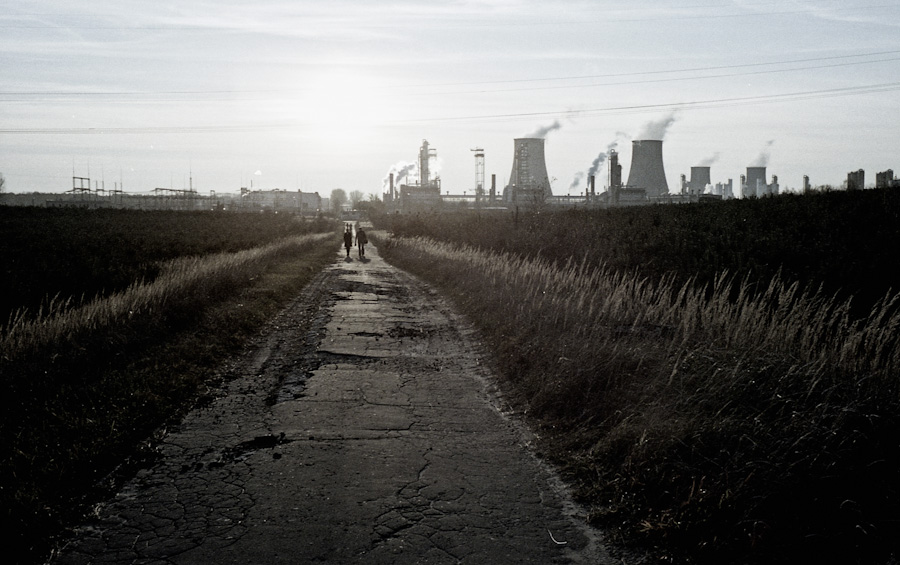 Q: Your perspective tableau of distant silhouetted figures walking on a lonely road toward what appear to be nuclear towers is very compelling. Can you tell us something about how and where you came to shoot this iconic image and what it means to you?

A: I took this photo near my hometown, Pulawy. It’s a small town in Eastern Poland, where most of the population works in one, big chemical factory that you can see in the picture. There was a forest across this entire terrain, but since the factory produces incredibly large amounts of chemical waste it now looks like a desert. There’s almost nothing in the skyline, just empty fields and the factory. It’s a restricted area, so you’re not allowed to take pictures there for any reason. Every time you go there, you can expect the guards to confront you within a few minutes. Nevertheless, I go there from time to time, partly to recall the time when I was starting out with my photography. It’s strange, but I find trash locations and empty, post-industrial buildings to be a bit nostalgic. 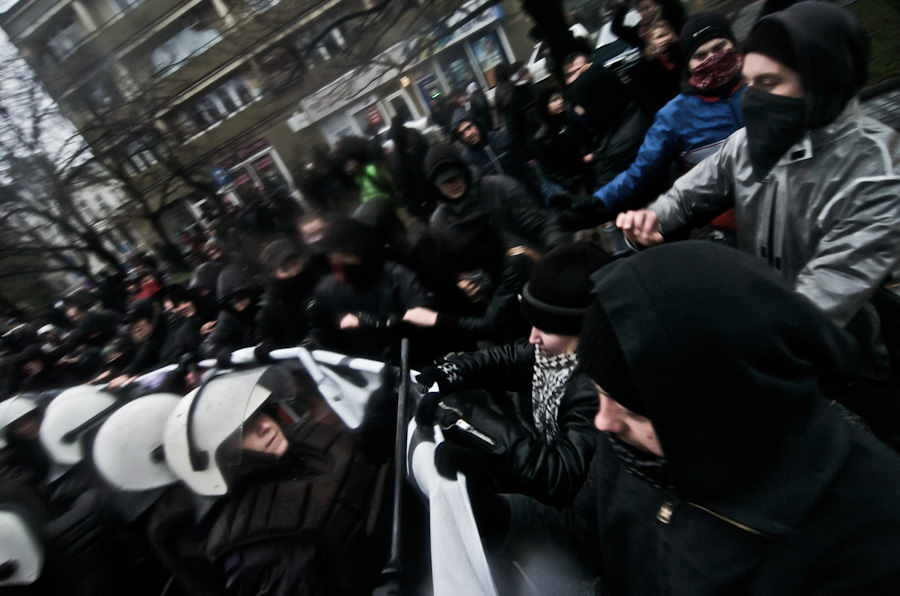 Q: Your photojournalistic series of street demonstrations in Poland and their aftermath are definitely in the Leica tradition and reflect the work of some of the great photojournalists you would like to emulate. What motivated you to create these images and do you think they convey a particular message or point of view?

A: I was always interested in documentary and social photography and a situation where people are gathering to fight for some reason or to prove something was always a natural place for me to be and to document. It doesn’t matter if it’s a peaceful protest, or serious riots, you can always feel the emotions of the people. In the big city, people ought to be at school or work, not screaming or fighting in the middle of the street. They only do so when they seriously want something and they’re determined to make their demands known. This is something I admire and want to document.