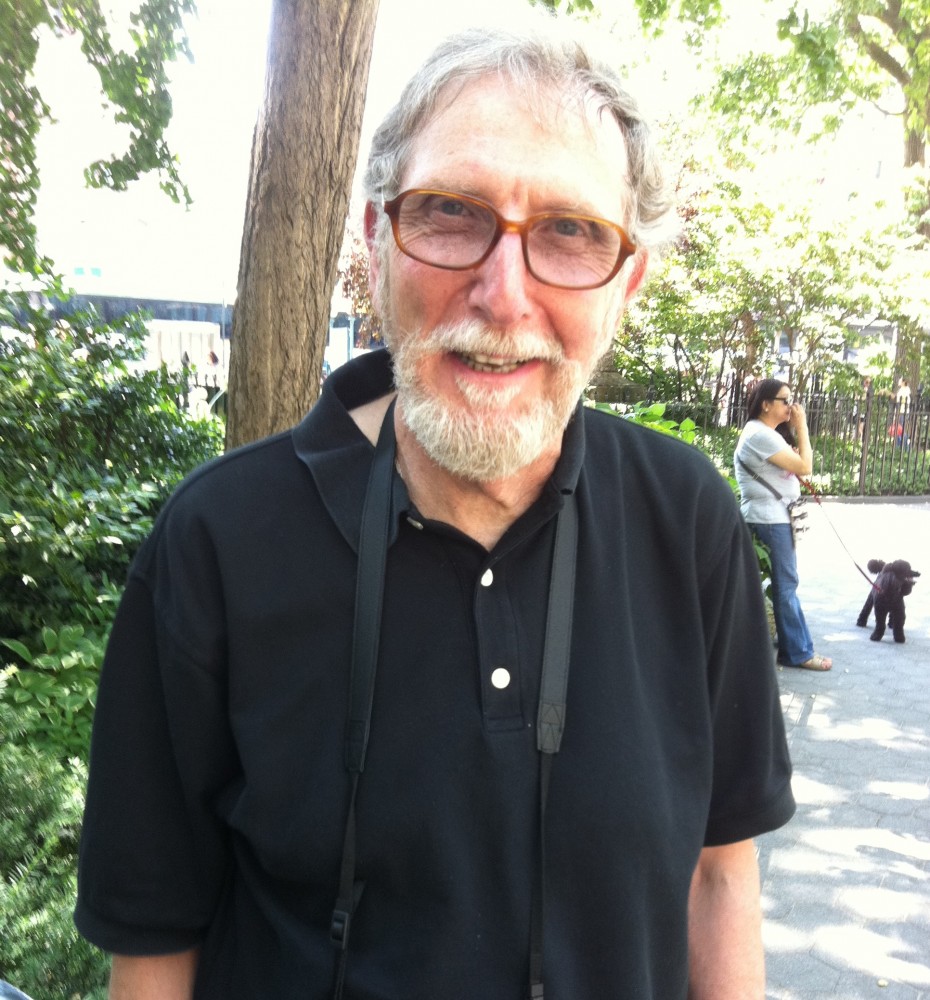 “…glad you were able to shorten the piece to meet your requirements. Now if you will kindly e-mail an order of
sauerbraten mit kartoffel pfankuchen from Deutschland I would be most appreciative. Best regards, Jason”
June 19, 2007

Tomorrow is a very special day for the Leica Internet Team as we celebrate the 70th birthday of our esteemed blog writer, Jason Schneider. Jason is not only instrumental in assisting with blog interviews, but contributes his wordsmithing talents for Leica’s website and print materials as well. He’s built a long and prosperous career as a photographic journalist. Jason has held numerous prestigious positions, including serving as Editor at Large for Popular Photography & Imaging, the world’s largest circulation magazine devoted to film and digital imaging. He served as Pop Photo’s Editor-in-Chief for over fifteen years. Prior to that, Schneider was Editorial Director of Modern Photography, where he joined the editorial staff as Assistant Editor in 1969.

A self-admitted life-long Leica maniac, he also has several other passions, including motorcycles, poetry, music and philosophy. In our eyes, Jason is a modern day Renaissance man. To celebrate Jason’s birthday we decided to turn the tables and ask him a few questions about life, photography and, of course, Leica. Team members in Germany and America, who have had the distinct pleasure of working with Mr. Jason Schneider, submitted questions for this interview, which Jason said was his most difficult interview yet. From his home in the Catskills region of New York State, to here on the blog, Jason shares some of his wisdom, passion and advice with us.

Q: When and where did you develop your love of photography?

A: I have been a dedicated photo enthusiast since I was 14 years old and living in New York City. I discovered photography pretty much on my own as a teenager. I made friends with other teenage photo geeks in my neighborhood and that spurred my interest. My first serious camera was a German folding 2-1/4 x 3-1/4–format roll film camera with manually set shutter speeds and apertures and scale focusing. I soon tired of bringing my black-and-white 120 film to the local drugstore for processing and set up a rudimentary darkroom where I became a pretty good self-taught black-and-white printer by dint of dogged trial and lots of error. For me, photography has always been a kind of magic — after all can you imagine expressing your state of consciousness and making a statement about your perception of the world simply by deciding what’s in the frame and when to press the shutter release? The fact that you can do this is a cockeyed miracle.

Q: What’s your background as a veteran photography writer (even though the word “veteran” is now banned from use in the blog)?

A: I began writing the Camera Collector column for Modern Photography as a freelancer in 1969, and by October of that year an unexpected staff vacancy allowed me to fulfill the position of Assistant Editor (which I always abbreviated as Ass. Ed.). I’ve always been fascinated with both writing (especially poetry) and photography since my early teenage years so it is not all that surprising that I have made a career out of writing about photography.

Q: Has writing for Leica blogs changed your way of writing things from an organizational, conceptual, or stylistic point of view?

A: Yes. I think that writing Leica blogs has helped me to concentrate on the essentials of each subject’s creative process and to be grounded in the work itself rather than trying to characterize these individuals from the outside with flowery descriptions of who they are or what they do. In short, I am asking better questions, so the answers are more meaningful and revealing as well.

Q: What is your favorite question to ask during an interview?

A: When interviewing photographers I am always most interested in their creative process, so I ask them what they are trying to achieve, or if they have an overarching mission statement that applies across all the genres their work covers.

Q: Who is the most interesting person you have interviewed?

A: That’s harder to answer than you might think since I’ve interviewed literally thousands of people over the past 44 years or so. I was very impressed with the heartfelt empathy and humanity of Carol Guzy, a four-time Pulitzer Prize winning photojournalist I recently interviewed in conjunction with her receiving the 2012 PMDA Photographer of the Year Award. I also fondly recall a discussion (not really an interview) with Peter Karbe, Leica’s chief optical designer, about three Photokinas ago. What impressed me was his grasp of and reverence for the heritage of Leica optical designs that he drew upon to create new optical masterpieces. No other company with the possible exception of Zeiss, operates in this way, and the results are certainly unique and extraordinary.

Q: What was your first experience with Leica?

A: After handling, but not shooting with, a couple of screw-mount Leicas owned by friends, I was determined to get one just on the basis of its reputation and the pure visceral joy of operating the controls. When I was about 16 I saved some money from my weekend job as a caddie and bought a black-finished Leica II (also known as the model D) with 50mm f/2.5 Hektor lens at Willoughby’s on 32nd street in New York City for the grand sum of $39.50. I have been a Leica maniac ever since.

Q: If you were to travel around the world and could take one Leica body, and two lenses, which would it be and why?

A: Leica M9 with 35mm f/1.4  Summilux-M ASPH and 75mm f/2 Summicron-M lenses because the M9 is the quintessential Leica M experience in digital form. Those two lenses would cover practically anything I’d want to shoot with a Leica M while providing brilliant performance plus the ability to capture cool pictorial effects by shooting wide open.

Q: How is a Leica Camera similar to a motorcycle or how are they similar hobbies for some photographers?

A: It’s not that Leica cameras and motorcycles are similar, other than being mechanical devices intended to fulfill a specific purpose. It’s that both Leicas and motorcycles engender a certain passion in those that are intimately involved with them, and that both have a wealth of history and related technical minutiae related that Leica nuts and motor heads can really get off on. It’s definitely fun to trade obscure factoids with another maniac who’s on your wavelength, and that is just as true among watch nuts and car nuts (I am both) as it is among Leica and motorcycle fanatics.

A: There is no better place to be a photographer, especially a street photographer with a Leica, than New York City. As a callow and narcissistic youth I envisioned myself as a great photojournalist, but while I had some talent in that direction, I lacked the drive, dedication, and perseverance to make it happen. Fortunately for me, New York is also the center of the publishing industry and it was there that I found my ink-stained niche.

Q: What were some of your favorite photographic assignments?

A: Back in the day I once photographed the (unrestored) interior of Grand Central Terminal at 3 a.m. with an 8×10 view camera using flash powder and was nearly arrested despite getting official permission because I had been less than forthcoming about the thunderous boom and smoke that would ensue.

I also fondly recall shooting an entire wedding with a Leica IIIg and 50mm f/2.8 Elmar lens on Kodachrome 25 after both my Rollei twin-lens reflexes packed up at the same time. Fortunately for me, it was a beautiful, slightly overcast sunny day and I simply dragged everyone outdoors for picture taking. The results were fantastic, and my (well-heeled) client gave me a big tip.

Q: What, in your opinion, makes a great photographer?

A: The ability to distill, in compelling images captured with a camera, some small part of the experience of what it means to be human on this planet.

Q: You can get very philosophical; what would you say is your personal philosophy about photography?

A: Photography is a small attempt at immortality — a way to preserve some aspect of your identity, your time and your consciousness; communicate it to others and bring it forward into the future. You can say that about virtually any art form of course, but photography is unique in being able to do more with less by employing an effective lever, a technologically based visual recording medium. As I said, the two essential variables in photography are deciding what will be captured in the frame (composition, lens selection, vantage point, shooting angle) and what instant will be captured for posterity (that is, when to press the shutter release). An awareness of light and a mental concept of what you want to achieve are certainly helpful in creating memorable photographs, but it really boils down to controlling those two variables, through which you can create and mold a multiplicity of realities.

Thank you Jason for all of your contributions to Leica and your passion for the brand. We wish you a very happy birthday and many more!

You can read more of our interview with Jason here.