Preedee Ponchevin was born in Bangkok, Thailand in 1979 and he still resides in his home city. He graduated from Kasetsart University in 2001 with degree in electrical engineering and went to work designing software systems. In 2009 he became interested in photography and began studying the medium. He has been shooting ever since and doesn’t think he will ever stop, but he does make time for other interests such as listening to old music and viewing other mediums of art like painting. Earlier this week we took a look at Preedee’s street photography work in part one of our interview with him and here we delve deeper into his Thai Flood series taken in the aftermath of the 2011 flooding that submerged Thailand for months.

Q: How would you describe your photography?

A: The photos in my Thai Flood series, intend to offer a point of view in the style of street photography — focusing on people’s emotions, symbolic meaning, and some fine art elements such as lines and colors.

Q: Can you tell us a bit about what it was like to experience the flooding in Thailand, both from a personal perspective and as a photographer trying to document what was happening?

A: The flooding that took place in 2011 was the worst flood that the Thai people have ever experienced. It has had a great effect on the country’s economy. Many production plants were submerged for several months and the rate of unemployment increased significantly. Living with water at 0.5 to 3 meters high (even more in some places) is not easy for urbanites, who have never experienced such a thing before. In many places conventional vehicles can no longer be used. If it normally takes you one hour to travel back home from work, now it can take three or more hours. At this point in time, most of the area of the city of Bangkok is dry and life is starting to get back to normalcy, but the damage is more extensive than the government has admitted. There are many volunteers who are helping clean up their home city. As a photographer, it is just another opportunity to document different aspects of everyday life. You can’t always choose the situation you want to photograph, but you can make the best out of the worst situation by searching for the perfect moment for yourself.

Q: Many of your images appear as though you and your camera are right at water level. How did you accomplish those shots?

A: In this series of photography, I spent a lot of time on my knee or I just laid down on the flooded street with water right up to my neck. Whatever it takes to get the job done. 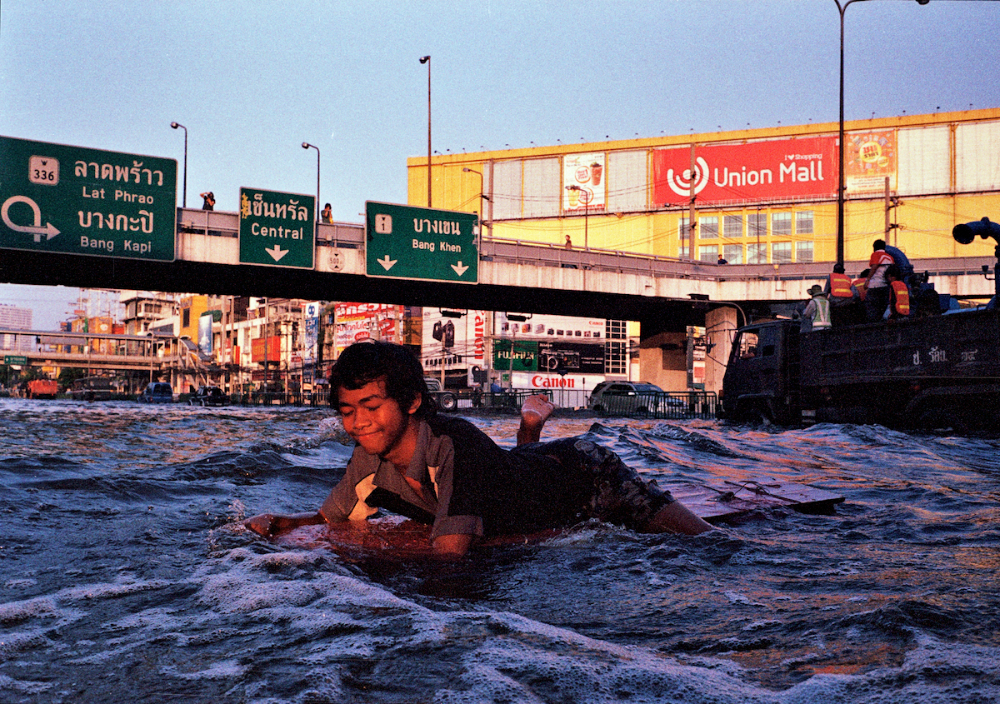 Q: Your image of a young man on a makeshift raft floating along a river that is actually a major highway is both horrifying and amusing because of his closed eyes and almost blissful expression. How did you manage to take this picture without destroying your Leica M6 and what meaning does it have for you?

A: The Leica M6 being such a small camera with only a few electronic parts made it easier to get really low to the water level without having to worry too much about the camera getting wet. Also since most of the camera’s operating system is mechanical, even if the electrical components are wet and unable to function, the camera can still work without too many problems. This photo of the boy who’s playing in the surf generated by a passing bus represents the spirit and strength of mankind. Even in the face of danger we can still find a way to make the best of the worst situation and be happy. 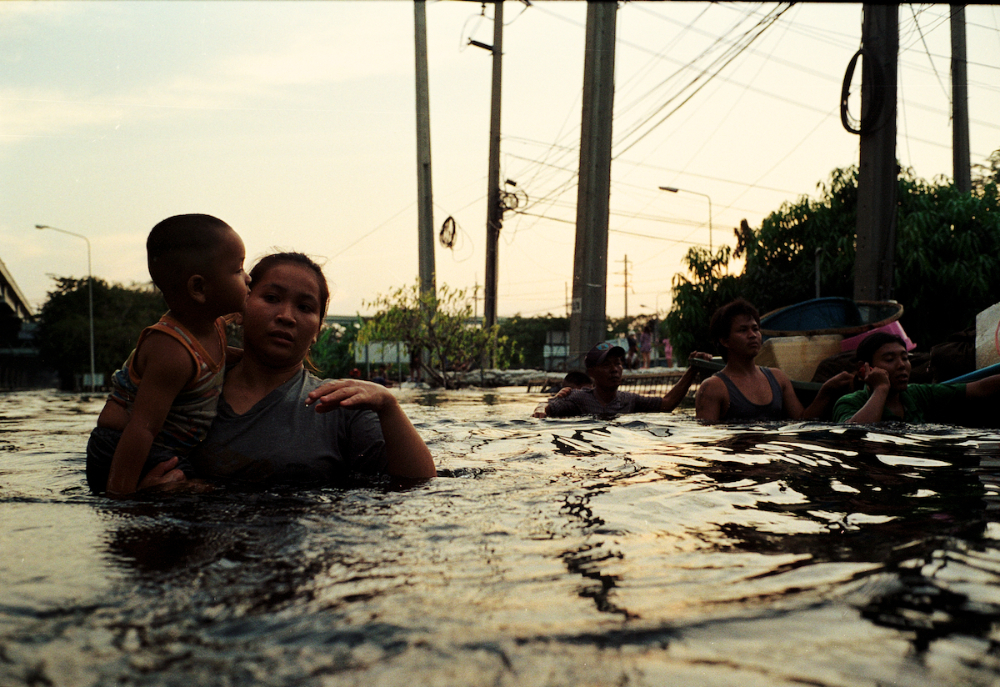 Q: The picture showing a mother holding a young child on the left side, and other random people on the right, all standing in waist-deep water with electric poles in the background is a masterful composition that tells a story very effectively. It is a sad picture, but it seems to convey resignation to one’s fate rather than desperation. Can you comment on this image and what motivated you to capture it?

A: My motivation is the love and strength of a mother. To walk in the deep water requires significant effort and tenacity. I also wanted to point out the impotent part of the communication. The broken telephone pole by the flood is the symbol of failed communication and being without communication is equal to disaster. 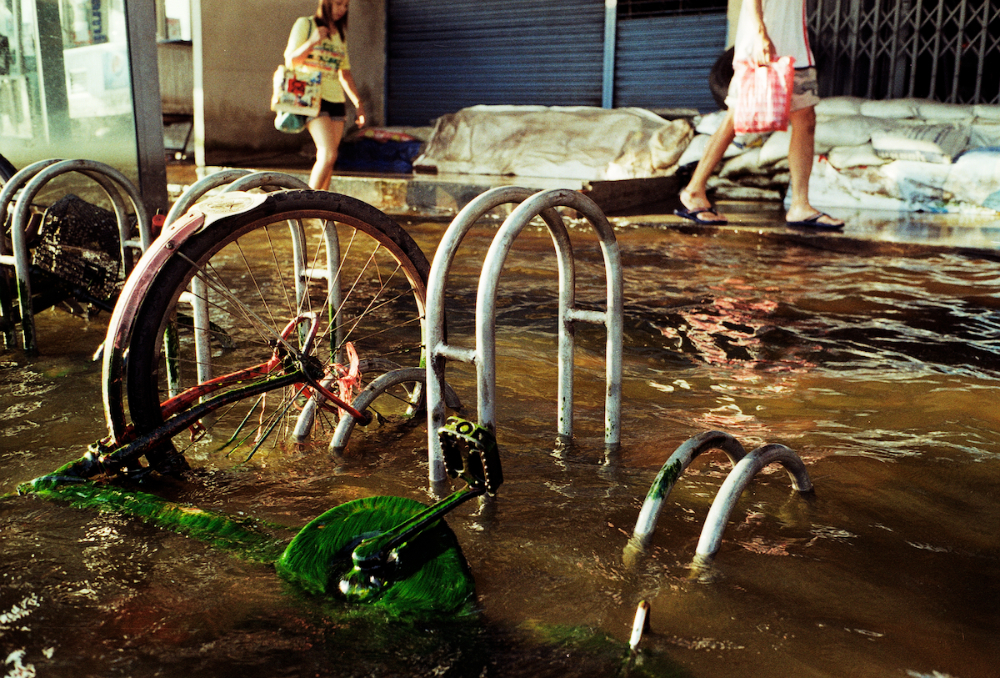 Q: Your picture of an overturned bicycle in a bike rack partially submerged in brown water with passersby in the background certainly conveys the feeling of the flood disaster very effectively. Can you tell us what your thoughts were when you pressed the shutter release?

A: The only though in my head was, “How long has it been underwater?” 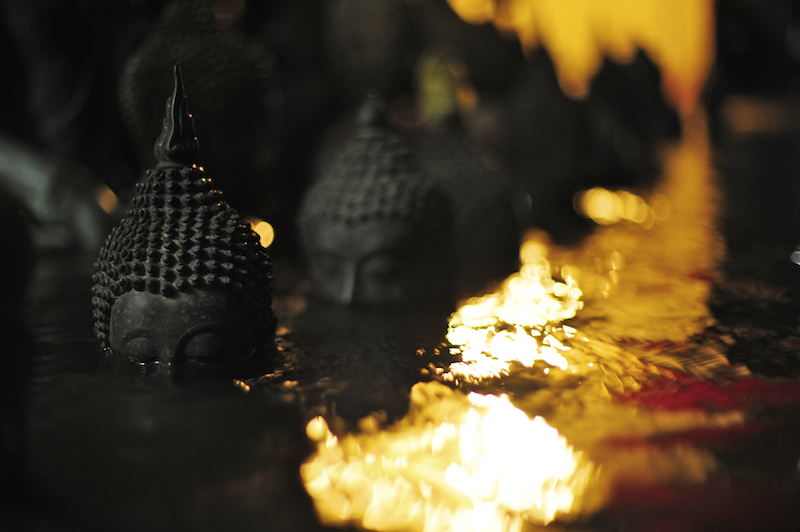 Q: The image you captured of Buddha statues partially submerged in a sea of golden light reflections on the water has a surreal and abstract quality, but also documents a scene of total destruction, and seems to convey the spiritual dimension of the tragedy. Do you agree, and how have other people reacted to this image?

A: Thailand is a Buddhist country and of course the Buddha image is a symbol of the country as well. To me the image represent the knowledge (the golden light) that we can or may learn from this watery disaster. And for those who view the image I will leave them to their own imagination.

Q: Many have said that Leica lenses render subjects in a distinctive and identifiable way — the so-called Leica look. Do you agree that there is some kind of qualitative difference in the images you’ve captured with the 35mm f/2 Summicron lens on your Leica M6 versus pictures you’ve taken with SLRs?

A: I personally never used film with an SLR before, but I did used the Leica R lenses on my DSLR. And yes, when I compare the images to those taken with other lenses I’ve shot it surely has that Leica look.

Q: What is your view on the difference between film and digital image capture, and have you ever considered acquiring or shooting with a Leica M9, essentially a digital version of your M6?

A: I’m starting to become interested in the world of photography after the digital revolution when everything is so easy compared to the film era. Shooting 0 and 1 sometime makes us forget the real craft of photography. In the digital world, when your shot doesn’t come out as you want, all you have to do is press the delete button and reshoot it. But in the film world you really need to practice your light reading skills; you really have to know and understand your camera, the limit, what rules you can bend and get away with to get good photos. Shooting film is a good way to practice the art of photography, especially for someone who came into the world of photography after the digital revolution such as myself. Do I ever want to shoot with an M9? Yes I do. It is my dream camera and I’m saving money for it right now. I hope it will be in my hands soon.

Q: Have you ever considered shooting with a wider-angle lens than the classic 35mm, such as a 28mm or 24mm? Do you prefer shooting with prime (single focal length) lenses and if so what are the advantages of this method for your own style of shooting?

A: I personally love to shoot with the focal length lens similar to human eyes. But 28mm and 24mm is also a good tool to use when you are in tight spaces and it also lets you talk to your subjects. You can learn who they are, not just a face, so you can enjoy the experience of photography even more.

You can see more of Preedee’s images on Flickriver.