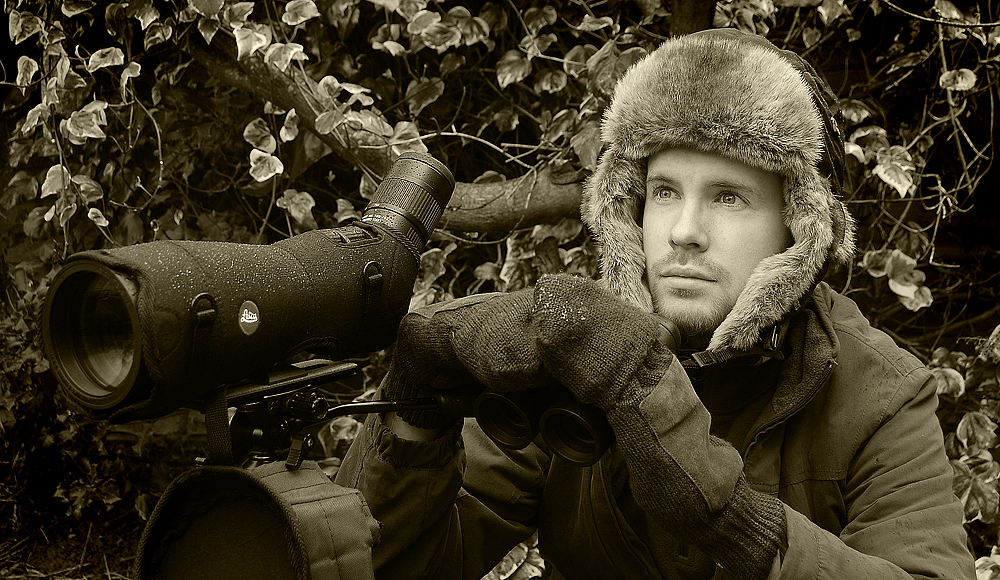 Don’t be fooled by his young age, Ben Macdonald is an experienced and passionate ornithologist. Since his stand off with a hungry crow at age seven, Ben has been devoted to the study of birds. Though he’s travelled all over the world to document wildlife, he remains committed to his work in Britain. Ben cites his varied influences ranging from Dostoevsky to David Attenborough. His talents extend to still and video camera work as well as editing, and his “Macsnaps” feature more than just winged creatures. In our interview with the multi-talented Ben Macdonald, he shares his history, his passions and his five-year plan.

Q: Could you give us a brief history of your background?

A: I have grown up with the natural world. As a small boy, my parents took me to butterfly farms where I first learned that wetting the tips of your palms would draw salt and conjure postman butterflies out of the pot-plant rainforest. Years later, on a filming expedition to Mount Roraima in Venezuela, I saw these magnificent species in the wild.

My interest in ornithology began when I was seven and my first great encounter was with the Welsh Chough. For years we walked as a family on the Pembrokeshire coast, but, for many seasons, this charismatic crow eluded us until suddenly, when eating sandwiches on St David’s Head, a glossy, red-legged apparition appeared in time to share our lunch. Since then, I have studied species and sought encounters with birds across three continents, but my heart has always remained in Britain – with the birds that build their homes in our countryside, towns and in our seabird cities. For the past ten years my study has become earnest and wide-ranging and I now specialise in breeding birds and their nesting biology. Increasingly, I am passionately interested in the future of the British countryside and what can be done to preserve what we have left.

As a career, natural history filmmaking has always been my ambition. The combination of creating a masterpiece with studying the natural world in-depth lies at the heart of all great wildlife films. There is no better genre, or medium, to touch millions of lives and change attitudes forever or at a young age. Having always enjoyed crafting stories, writing music and framing good photographs, the act of creating something from scratch has always thrilled me. So has chasing and studying elusive and rare species, narrowing the odds from a whole country to a tiny inch of ground where a spectacular animal is strutting its stuff. Natural history filmmaking combines these twin passions into one.

Q: Which Leica products have you used, and why did you choose the Leica brand?

A: I currently use the Leica Ultravid 8×42 HD binoculars and the Leica APO-Televid 82 spotting scope. It was the latter item that first drew me to the brand. When I got into university, my family bought me another brand of scope as a reward, but only years later did I find a scope that mimics exactly the colours and textures seen with the naked eye. The binoculars are the same; both provide a painting-like quality to the image, whilst maintaining its realism. This, for me, is the so-called ‘USP’ of the Leica optics, although tank-like durability and fast focusing are certainly bonuses.

Q: How has using Leica products helped you get the best results?

A: It is well-acknowledged now that most top-end scopes provide a high degree of visibility and zoom power, regardless of the natural light available. However, the Leica goes beyond being functional and allows me to actually enjoy looking at species for a long period of time. Finding glass that is restful is extremely hard and as I study the behaviour of some birds for many hours at a time, the new Leica scope allows me to feel that I am in the picture. This may sound highly unscientific, but I’ll have to leave it to the techies to explain the wonders of optical coatings!

Q: Who or what inspires you?

A: I am always inspired by people who can turn impossible or audacious ideas into reality. When I read novels by writers like Dickens or Dostoevsky, it humbles me that they can weave so many plots, characters and places together in a way that tears at our heads and hearts at once. In reality, it’s just words on a page, but then no one else has found the key! Likewise, great television and cinema has the same inspiring effect. When you watch David Attenborough’s early works, it’s easy to forget that the whole concept of uniting wildlife narratives from around the globe struck everyone else as unachievable. Now it’s the staple ingredient of what we call “blue-chip wildlife television”.

Great eloquence is another quality that inspires me. Almost all of history’s greats have been masters of the language and been able to work all kinds of wonders with it. Today very few presenters can use words well, but the ones that do stand out – Chris Packham, Andrew Marr and Brian Cox, for example. If I can follow these two characteristics then hopefully I’ll be successful in my field.

Q: What does the future hold for you? What plans do you have?

A: The future is often determined by other people, as well as you. If I can persuade others that I can be an asset to broadcasting, then I very much hope to play a part in shaping the next generation of television, especially in the natural history genre. In the shorter term, I’m pursuing several proposals for documentaries on subjects close to my heart; current ideas in the pipeline include a three-part radio series on the perception of animals, and single episode on the importance of bird nesting and the colourful characters that it attracts. In the longer term, I also hope to become one of Britain’s leading ornithologists. Generally, those who start early at something in their careers are put at a distinct advantage. I’m 24 now. Over the next five years, I’m hoping to publish a book on Britain’s breeding birds, and to continue my volunteer work for the British Trust for Ornithology. Hopefully, in time, I can play my part in giving Britain’s birds the future they deserve, whilst balancing this with a rewarding career in television.

Q: Can you tell us about one of your favourite projects?

A: A year after graduation, I took a bank loan and purchased a broadcast camcorder, then set out to shoot my own promo, with a view to pitching it as a wildlife documentary. Firstly, I had to learn how to use a video camera; surprisingly difficult, especially when you come laden with years of “baggage” from using still cameras, generally on still subjects. After a few months of practice on Woodpigeons and other slow-moving objects, I set out to capture some of Britain’s rarest forest creatures and weave them into a musical narrative lasting one-minute. In Scotland, a rogue male Capercaillie – a giant, turkey-like grouse – chased me angrily through the Caledonian pines. In the Forest of Dean, Wild Boar piglets ran happily underneath my tripod legs. I had to shoo them out in order to get them in the frame. Then came the next learning curve, the editing suite. Becoming a true editor is a lifelong vocation, but fortunately it took less time to cut together the footage and time the wing-beats to match with a musical score, specially composed by a friend. It only came to fifty seconds of leafy glades and musical piglets, but I can still watch it back with a small sense of pride. Another of my ongoing projects is to provide a comprehensive document of the breeding cycle of British birds. Several people have done this in the past, but, as our landscapes change and decline, I want to set in stone a record for the new century, a tribute to what we had, just in case we lost it forever.

You can see more of Ben’s work on his website, www.ben-macdonald.co.uk.