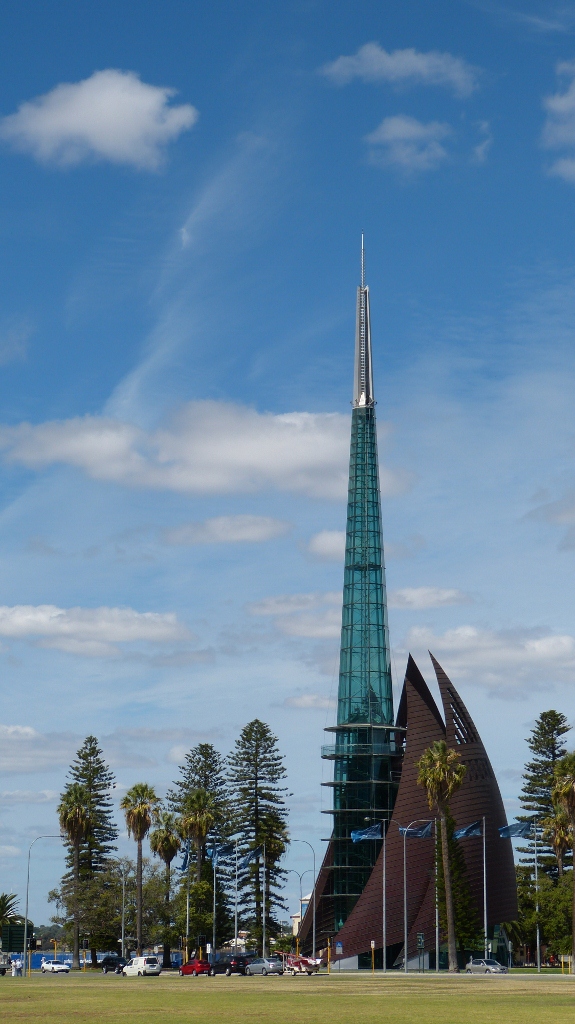 Answer to “Where am I?”: Perth, Western Australia

The 82.5 metre tall Swan Bell Tower is one of Perth’s most recognisable landmarks. Opened in 2000, it was built to house a set of 18 church bells – twelve of which were sent over from the famous St Martin-in-the-Fields church in Trafalgar Square, London.

The tower is made of copper & glass and derives its name from the river it sits next to.

I am back in England, and frankly, I wish I wasn’t. It is meant to be spring here yet, it looks like an Arctic winter outside – cold, dark and miserable. It’s times like this when the word “emigrate” crosses my mind. But where would I go? More accurately, where would have me?!

Western Australia (WA) would be high on my wish-list of locations, and more specifically, Perth.

The city is the state capital of WA. Sitting just off the coast of the Indian Ocean it is often referred to as the Gateway to Australia.

The mighty Swan River (which got its name in the 17th century and refers to the black swans that live in the area) runs through the city and offers water-sports galore. I am no sailor but if I had to, I could learn.

At 5 pm on a workday, floods of workers escape their offices and head to the many beaches (Cottesloe is particularly stunning) for swimming, surfing, diving, and of course that very Australian of past times, firing up the barbecue.

In summer, the temperature in Perth can reach a blood-boiling 46 degrees C and in winter it seldom dips below 15. It’s a dry heat too. And with almost non-existent ozone layer, it’s instant bone-warming.

My favourite attraction in Perth is Kings Park and the Botanical Garden. Being the largest inner city park in the world, it takes you on a historical and geographical journey through Western Australia.

Before the Dutch arrived in 1697, this part of WA was inhabited for around 40,000 years by the Whadjuk Noongar people. There are still a small number of Aborigines in Perth and I was given a tour of the park by one of them. It was a fascinating few hours where I learnt about how the indigenous people lived, how they would use natural resources (like the peppermint tree) as medicines and which flora you can and can’t eat! The Botanical Gardens boasts plant species from every corner of the largest state in the country.