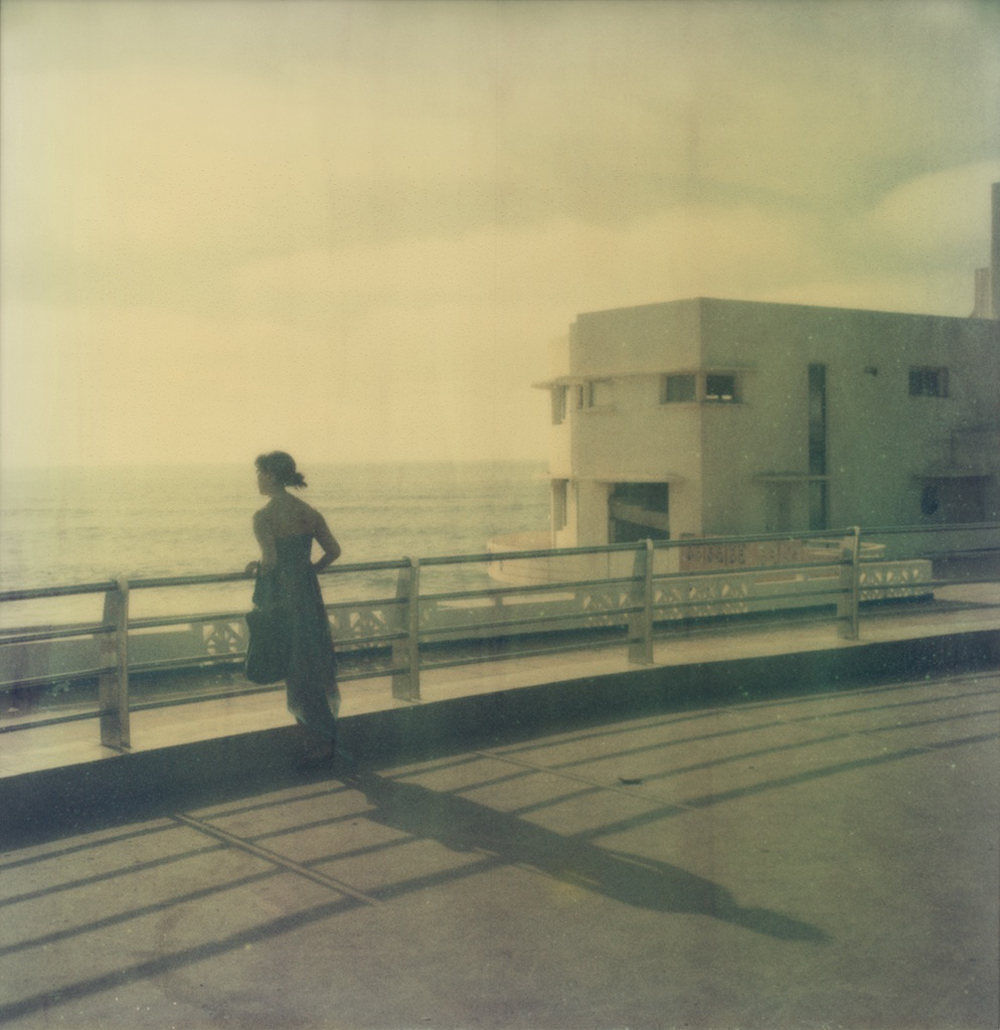 Looking at the body of work that photographer Marco Barbon is compiling with the intricacy of an expert craftsman, we can distinguish several defining characteristics that the artist repeatedly questions. Those characteristics, in return, structure his work and create connections between the different series that comprise it. Amongst these are the question of the “ambiguous” temporality that his images convey, their openness to the dynamics of dreams, a definite penchant for historic edifices, and a certain propensity to include letters or entire words in his images. This interview focuses primarily on these four axes. 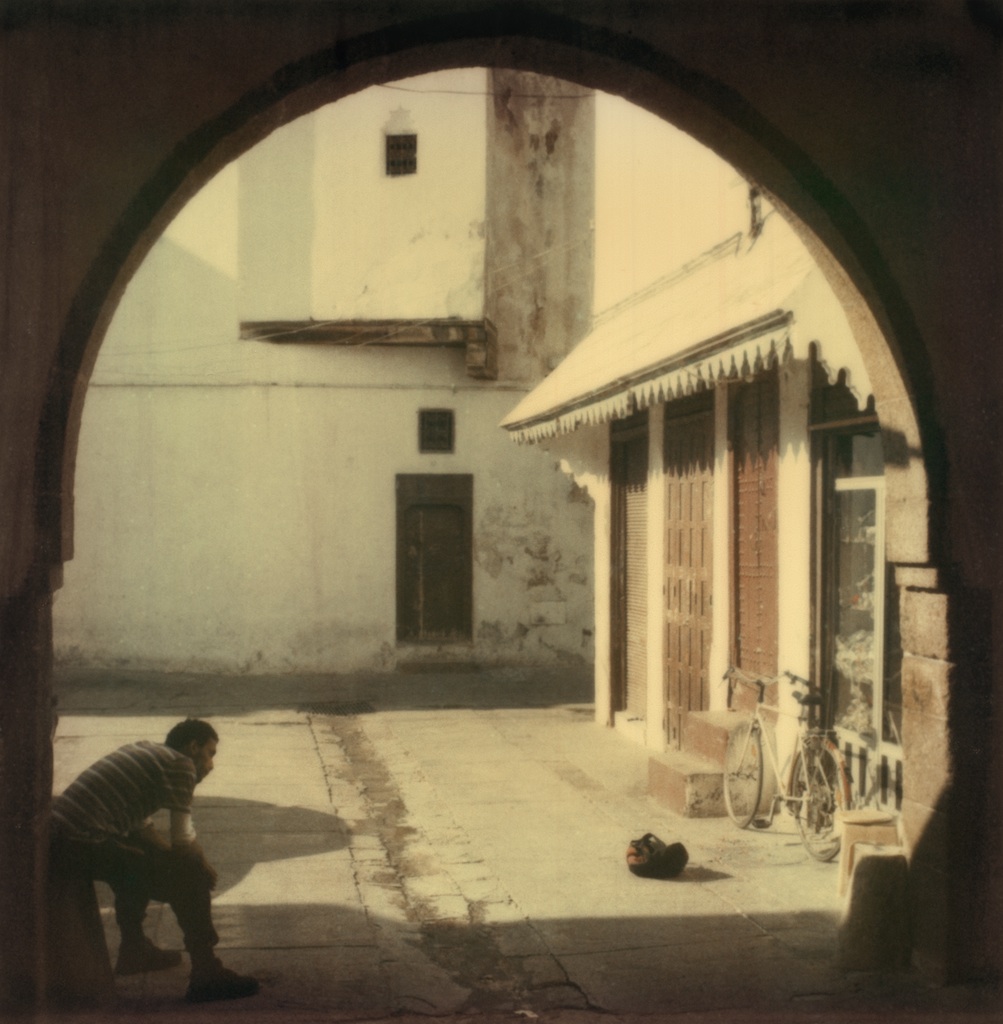 Q: In your first book, Asmara Dream, you wrote: “Before all this, one may wonder what period we are in, in the present or some place buried in our memories”. With Casablanca, your new work, which is also the fruit of a collaboration between the Italian and French publishing houses Postcart and Filigranes, one could ask the same question. It also seems to reflect the question of what might be described as a floating temporality that indeed seems to be at the centre of your work…

A: It’s true that there are similarities between Casablanca and Asmara Dream. This temporal “ambiguity” at play between my perception, the capturing of a precise moment, and its photographic rendition characterizes my approach. In my new work, that is further reinforced by the technical means I chose: out-of-date Polaroid film. The film in itself bears the mark of time – one could even say the mark of the past. The colours of my photos are not saturated and they adhere to the subject that they capture. For example, the light of the ocean, which, in a manner of speaking, is a dated light, is omnipresent in Casablanca. 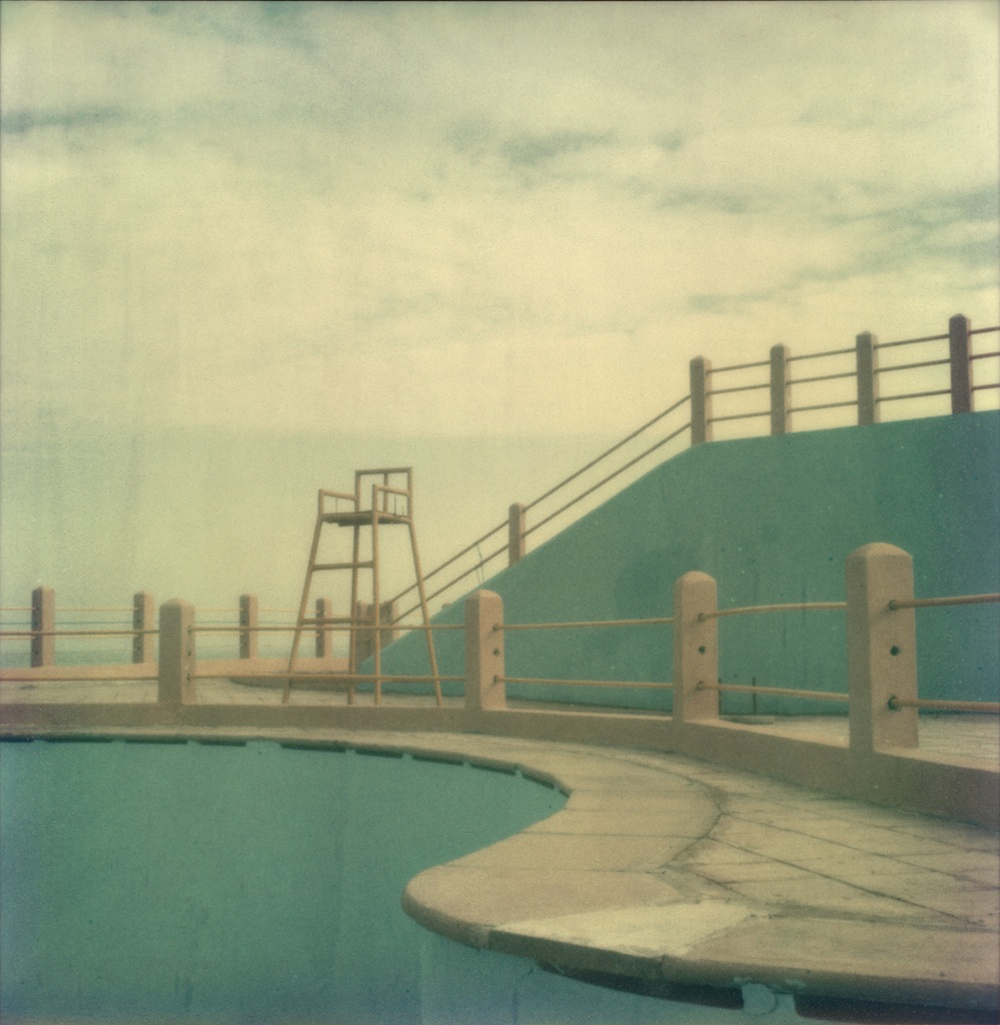 I also tend to work on subjects, situations and places that have been abandoned or are on the fringes of the town. In that, they possess an atmosphere, a quality and a particular temporal charge. With Asmara, the Eritrean capital, that was even clearer because, as a result of its vicissitudes, the whole country has remained on the margins of the world’s historical movements.

For Casablanca, it’s different: it’s a very modern city, but one which has also retained a decadent aspect. It’s grown from an early 20th century little fishing port into Morocco’s economic capital today. Most of its historic buildings date to 1910-1940; they were built by the French at the time when the country was a French protectorate. 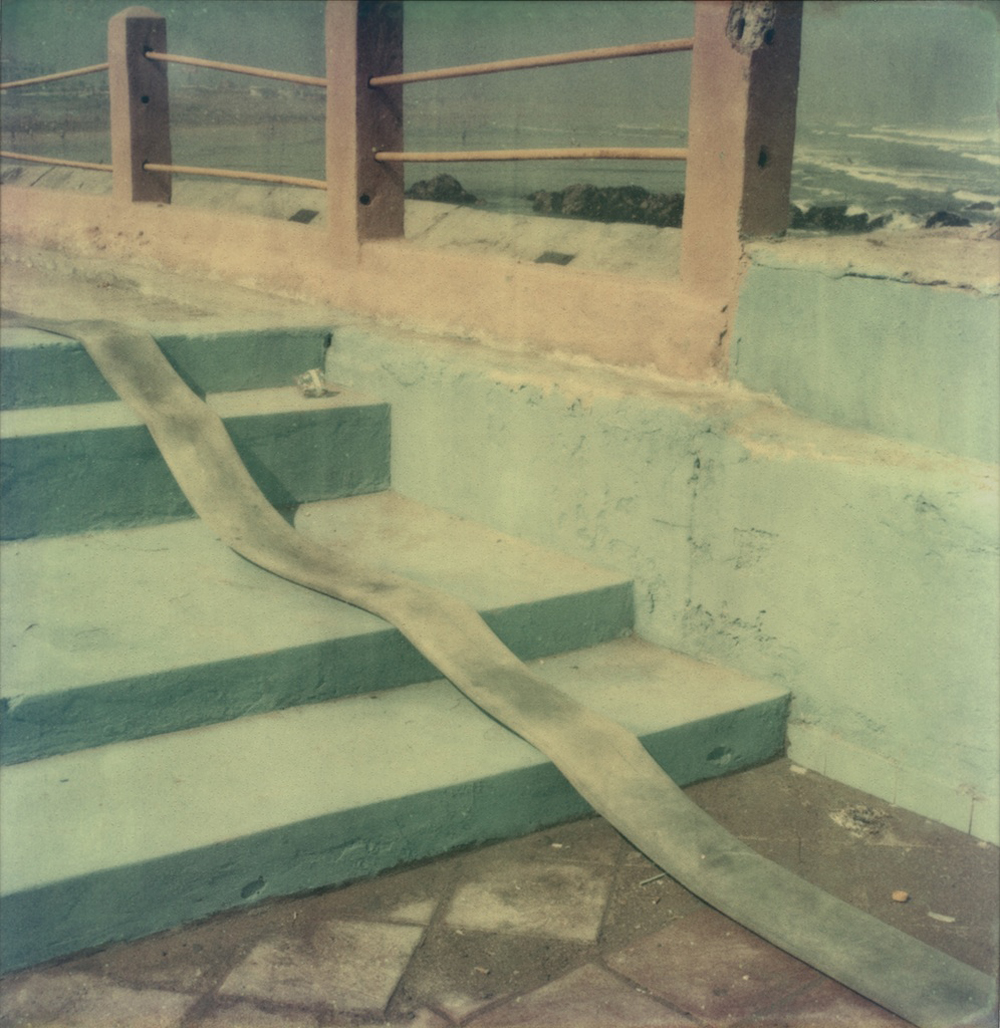 I must point out that my aim wasn’t to produce an exhaustive book on this town. On the contrary. I chose a viewpoint of Casablanca, which gives a necessarily limited perspective. It is my personal vision. I wanted to follow my intuition in this urban space and I stopped in certain neighbourhoods in particular. In the town centre, I roamed up and down the main boulevards and took photos of the run-down hotels, cafés, nightclubs, an old theatre dating back to the Twenties, etc. I also walked the corniche a lot.

These places testify to a by-gone period. For that matter, a whole host of renovation projects are now currently underway. It was precisely these “remains” that attracted me.

The Casablanca series is nourished by the imagination – an imagination built out of details. 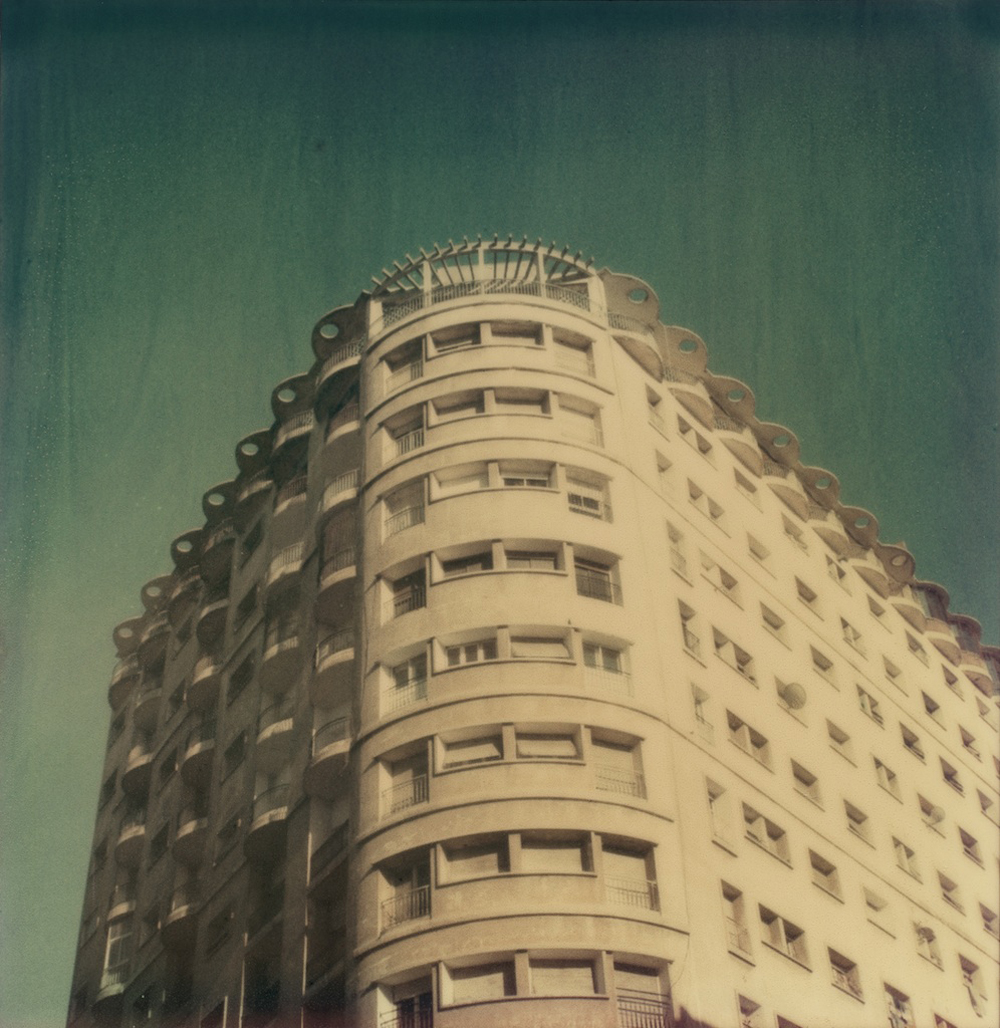 Speaking of which, I would like to insist on one point. It seems to me that in my own work, and in those of the photographers I like, it is possible to imagine that which we do not see from a detail in the image. For instance, one can imagine the invisible –what is outside the shot. It is fundamental for me to allow viewers the freedom of imagination. 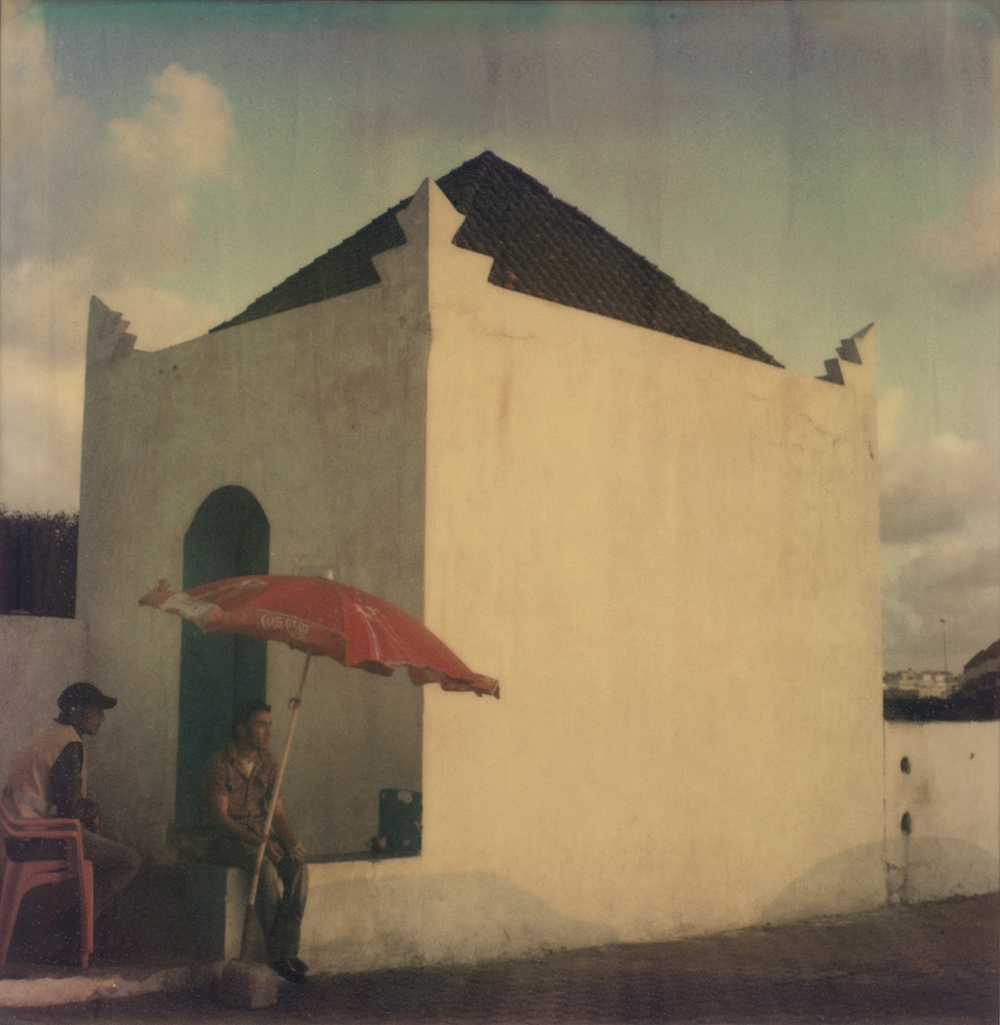 The question of suspension and waiting, which a certain kind of photograph displays, fascinates me because it is related to a “beyond time”. The image thus invites you to imagine what might have happened before or after the shot was taken, something which is not concentrated in the present moment of the taking. It’s clearly something paradoxical… and quite complicated. What really interests me are the things that do not have clear contours (I don’t mean technically speaking): the temporality of the image as an opening, a point of tipping into something that is beyond it. 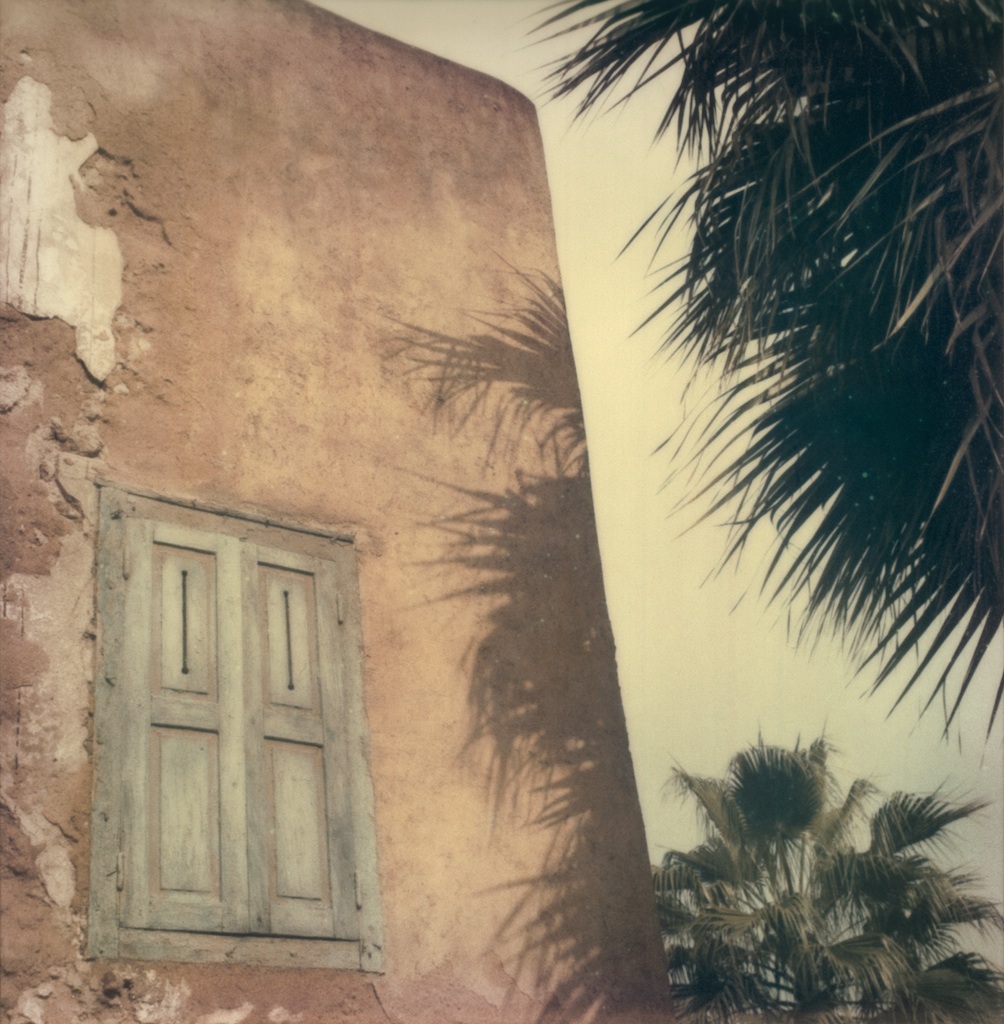 Another aspect that the images from the Casablanca and Asmara Dream series share is that I feel that a kind of silence is perceptible in them. Even though Casablanca is a noisy town, even say a little tiring, the images I shot there are permeated with silence. For me, the American painter Edward Hopper is a reference. His solitary characters in urban settings are also full of silence. 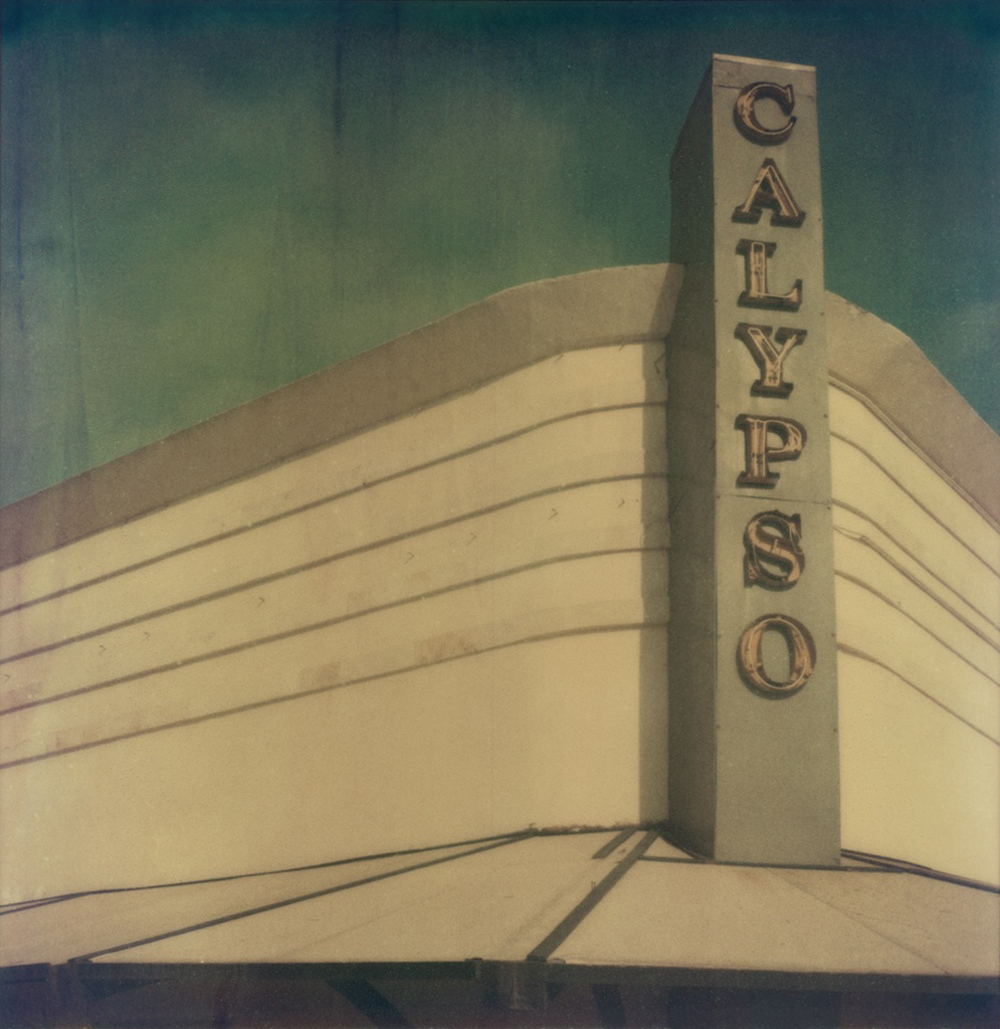 Casablanca’s inhabitants are rarely present in my photos. The photos relay man’s solitude in general and the solitude of those who arrive in this megalopolis, for it is a town where people come from all over the world to look for work.

Q: In the work you devoted to the town of Asmara, the question of dreams was present right from the start: in the title. Here, even though not explicitly mentioned, the notion of dreams is never very far… 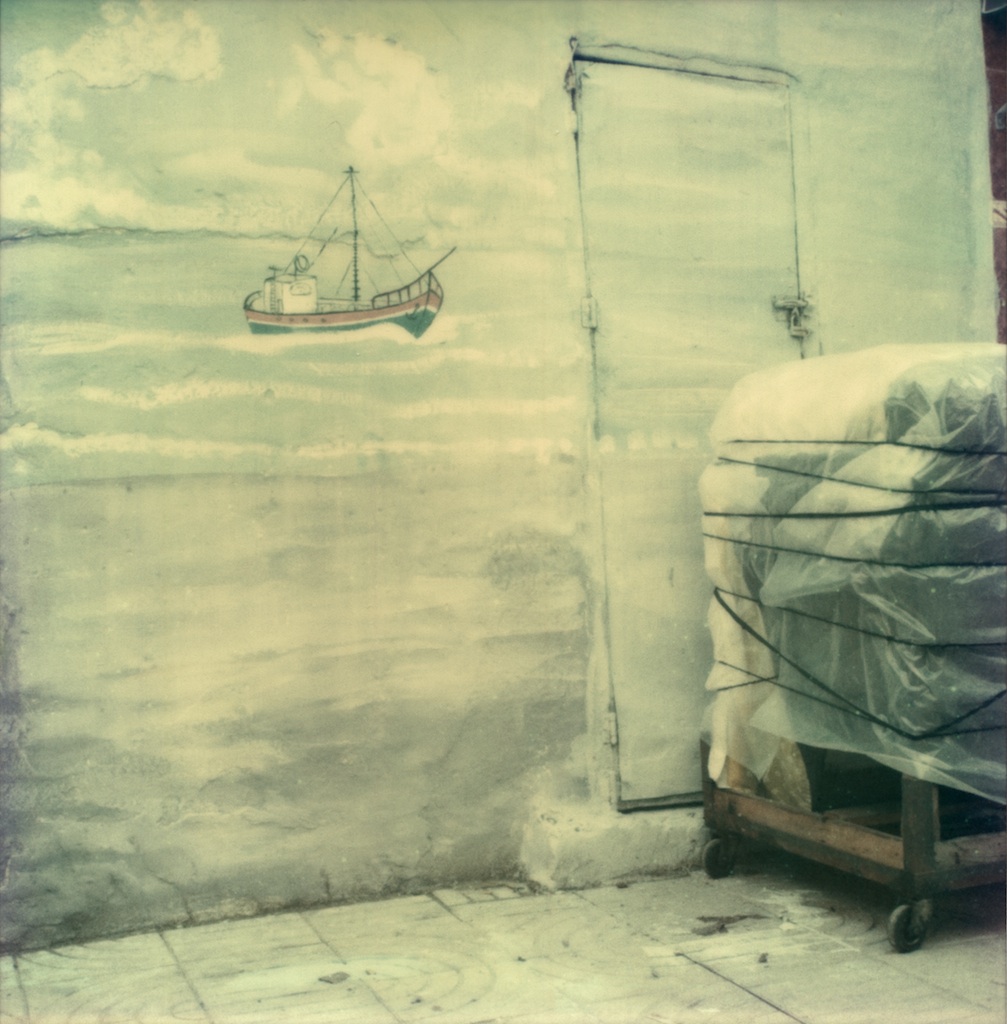 A: There is a photo in this series that I particularly like, “a fishing boat painted on the wall of the Medina braves the sea”. That could well be an image representing the town of Casablanca, as a passage from Souad Bahechar’s text that accompanies my photos points out (4), but also, once again, a metaphor of human life. Related to that is the idea of dreams. The sea and the horizon represent an opening toward the possible, the realm of the imagination. One can’t forget that this town is situated on Morocco’s Atlantic coast and America lies on the other side of the ocean. Casablanca is conducive to dreams, to projections and, like all megalopolises, incarnates the very possibility of dreams. But dreams can also get washed-up there. 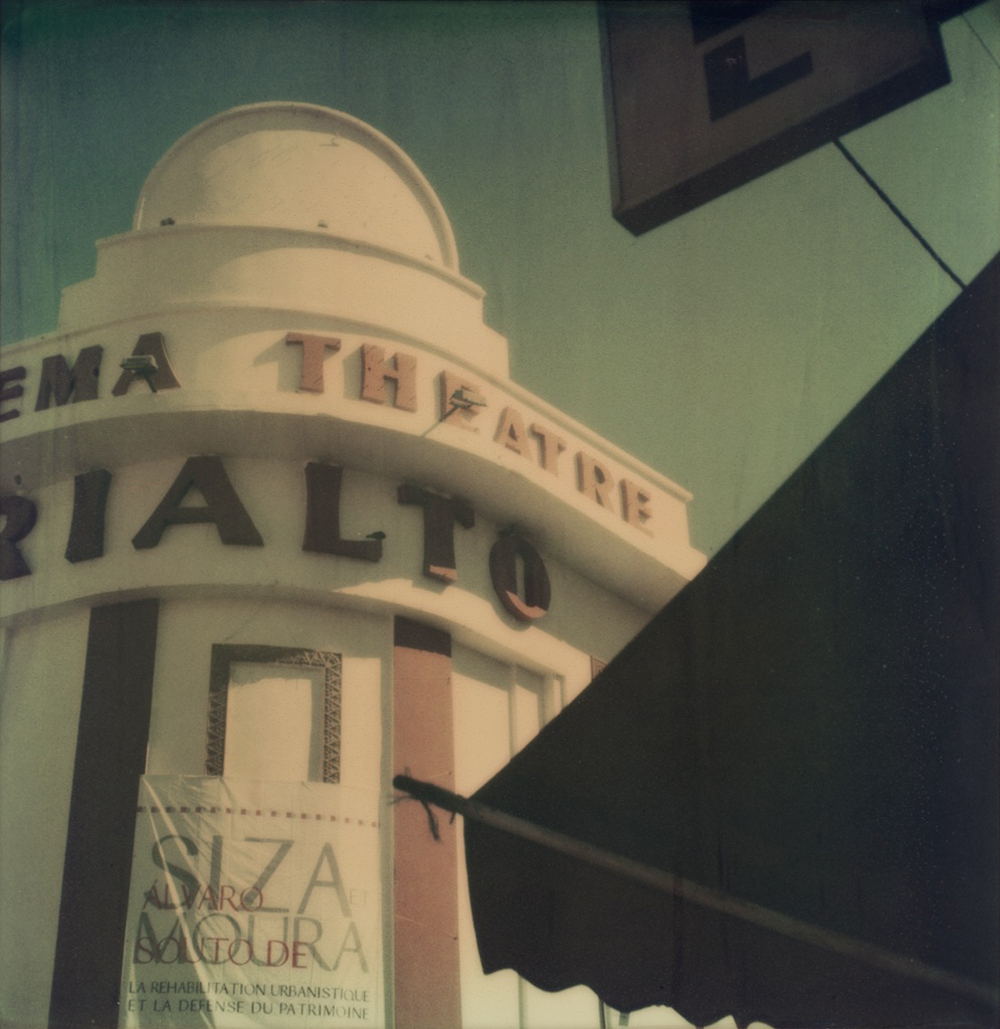 Q: In Asmara Dream, you scrutinize this East African town’s modernist architecture. Casablanca is also clearly home to architectural beauties that catch your eye. On one of the buildings you photographed, the “Rialto” movie theatre, there’s a banner which reads “urban rehabilitation and heritage defence”…

A: Casablanca is home to a considerable architectural heritage and also to a lot of art Deco buildings. One association, Casamémoire, works, to raise awareness about its conservation. The buildings of that period have something majestic about them, but also something domineering. I photographed them from low angles to accentuate the idea of the town’s overbearing nature and that of the solitude we spoke about earlier. For me, it was a case of accentuating certain details that are part of the experience of a town like Casablanca. Once again, this is a personal vision and path: the perspective of a pedestrian. I personally preferred to wander around places that have a certain gentleness – where the individual can be in touch with him/herself. These are, more often than not, places that are off the beaten track, and which resonate in relation to certain experiences. 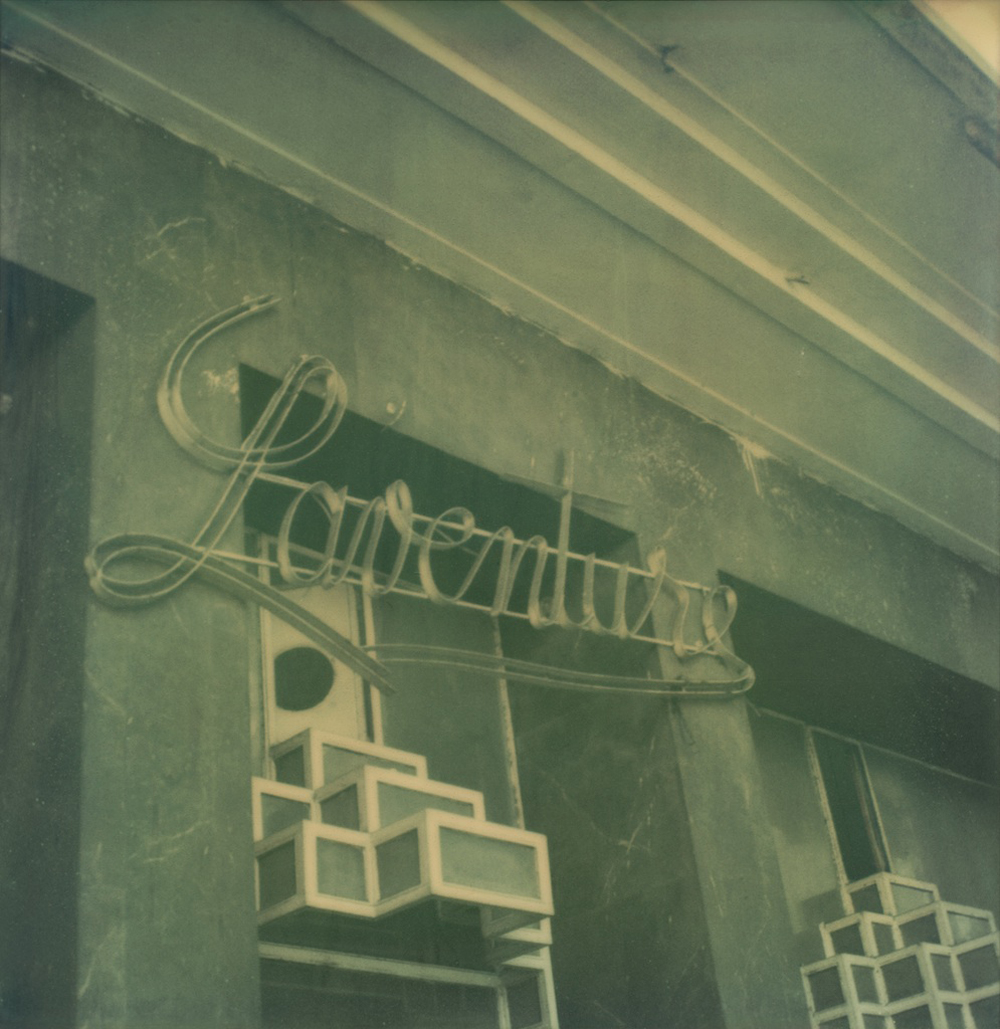 Q: In some of your photographs, letters or complete words, with evocative, often cinematographic meanings, penetrate the surface of the image: Calypso, Rialto, L’aventure [Adventure]. They thus seem to convey new connections, echoes, etc. …

A: Yes, some words appear in my photos due to what they convey both as an evocative force or for their graphic form. In Casablanca, one of the images focuses on a sign: “L’aventure” [Adventure]. It’s a reference to the wild nights of “Casa”, as people familiarly call the town. But it also hints to the adventure and the destiny of the town, and this adventure that is human life.

Since the places I photographed are abandoned, they are completely open to a certain type of imagination. It is possible to build a more intimate, individual relationship with them. At the other extreme, to give an example, is the Hassan II Mosque. It has the highest minaret in the world and almost all tourists in Casablanca visit it. In these places, which are already laden with collective and shared meanings, there isn’t really much room left for the imagination. 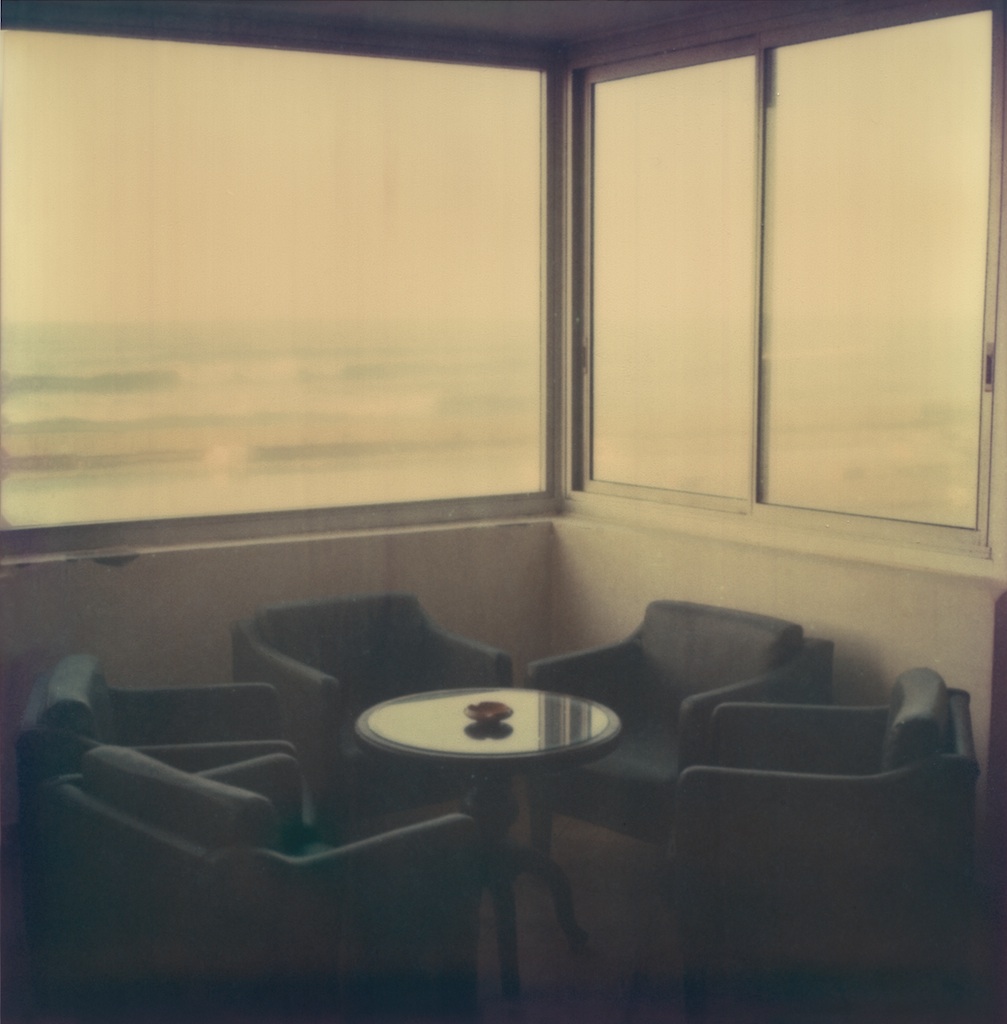 Q: One final, maybe anecdotal question: there are often images of cafés in your work. Why is that?

A: The café is the ultimate place of “passing through”. People meet at cafés and, at the end of a conversation or appointment, go their separate ways. It’s a space that, to me, seems representative of big towns where people meet and lose one another again. It’s also similar to a theatre stage: things take place there and stories are played out. When the space is empty, it is loaded with what happened in the past or what might happen in the future. And when it looks out onto the sea, as was the case with the café that we can see in the photo at the end of the book, it is all the more evocative…

To learn more about Marco and view his photographs, visit his website at www.marcobarbon.com. If you would like to read Marco’s original interview in French, click here.