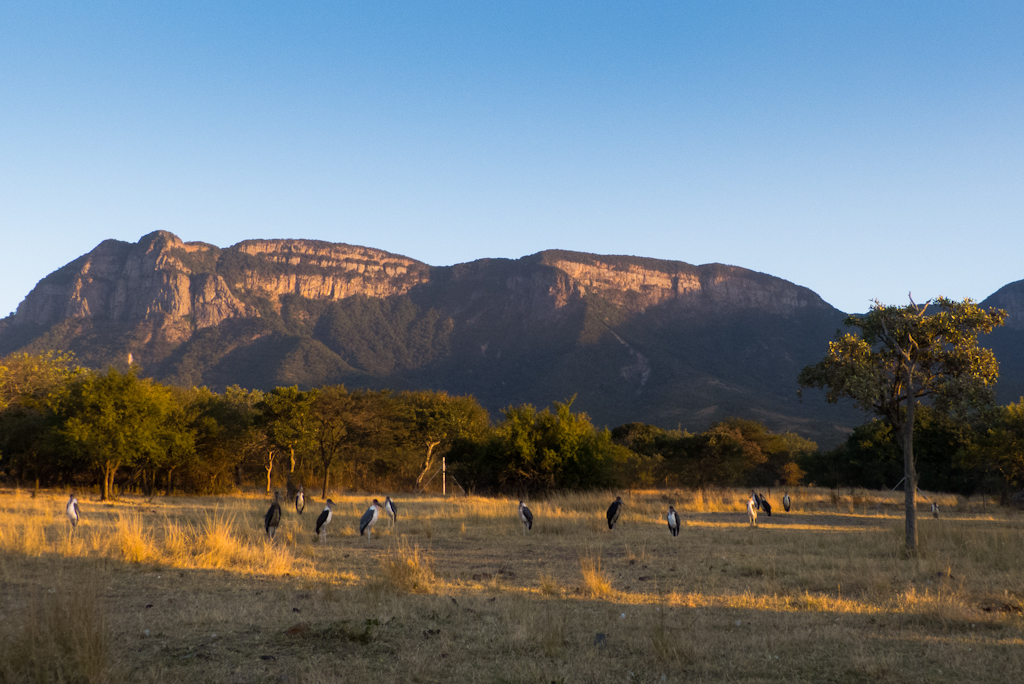 Answer to “Where am I?” : The mountain range is The Drakensberg Mountains or “Dragon Mountains” (which rise up to 11, 242 feet in height) and the birds are the Marabou Stalk, large wading birds that are sometimes called the “Undertaker Birds.”

Congratulations to everyone who answered correctly on the blog, Facebook and Twitter: Glyn, Mr. Bunny Chow, Alain, Michael, Joe, Komal and Hanief.

There’s an old adage in television: “never work with children or animals” . . . mainly because they are both highly unpredictable in their respective behaviour!

A few years ago, at Miami Zoo, I came face-to-face with a cassowary. This rather stunning flightless bird is, in fact, highly dangerous. It is a true omnivore and has, under threat, attacked and killed humans. Its middle toe, along with its muscular legs, can cause much harm. I sat next to one at the zoo and even fed it an apple. I remember sweating profusely while doing so, and no, it wasn’t the “Miami heat” causing the perspiration!

Last year I visited Durban in South Africa and was offered the chance to free-dive with a shiver of tiger sharks. It was great fun and I had no fear. I even put my hand (covered in a chainmail glove) out to feed one of them! A couple of days later I met a lady in the city whose sister had dived with the same shiver and had her leg chewed-up quite seriously by a couple of hungry ones . . .

On my latest safari trip to South Africa, I took a detour to the Maholoholo Rehabilitation Centre in the Kruger National Park. I cuddled a baby rhino, played with cheetah cubs, eyeballed a wild male leopard, petted a honey-badger and had the most frightening experience of my life.

It was feeding time for the committee of vultures and I was invited to enter the cage to distribute some fresh meat. With the bravado of Rambo, I entered the cage which was home to around two dozen large males & females. When I say “large”, I mean HUGE! Some were as tall as four feet high and each had beady eyes, skin ripping talons and beaks and they weighed close to ten kilograms a piece.

Very quickly, I realised that these scavengers who (rightly) have a bad reputation, are not to be trifled with! I put my arm out and the birds fought over who would stand on it (eventually a White Backed Vulture won out) and tore the meat out of my gloved hand. I did this three times before I ran, escaped, jumped and fled from the cage shaking. How my camera crew laughed!

The next day, on safari at The Royal Malewane (my favourite safari lodge in Africa), I was driven to meet-up with a male leopard who was half asleep in the bush. On our arrival, he waited for the vehicle to shut off its engine before he looked at me straight in the eye and open his mouth in an enormous yawn. His teeth, his jaw and his expression sent a volley of fear through my body! Once again, the wild had reminded me where I sit in its food chain.

Here are two videos we filmed on the V-Lux 3 at the Moholoholo Rehabilitation Centre: