Sometimes you need to narrow your focus in order to be more creative. You have to step outside of your comfort zone so that you’ll be challenged to take a different approach to your work. It may be a step forward into new territory, or it may be a step back to explore a path not taken. That’s how I approached my trip to New Orleans. I knew it could be years before I might return, so I wanted to make the most of my time there.

I was in New Orleans for a tradeshow. Any photography would have to take place during the off-hours or early in the morning before my appointments at the show. So, how best to focus my time and energy? I usually shoot wide-angle lenses with my M9, favoring my 24mm Summilux and 18mm Super-Elmar. I figured that New Orleans would need a closer, more intimate perspective, so I decided to use only a 50mm Summilux for this trip. I also decided to concentrate mostly on the cemeteries. If I was lucky, I might even have overcast skies. Harsh light might work well for some subjects, but I wanted the soft, luminous atmosphere you can see in movies such as Nosferatu (1922), Dracula (1931), Vampyr (1932), The Curse of the Cat People (1944), Beauty and the Beast (1946) and Wings of Desire (1987). 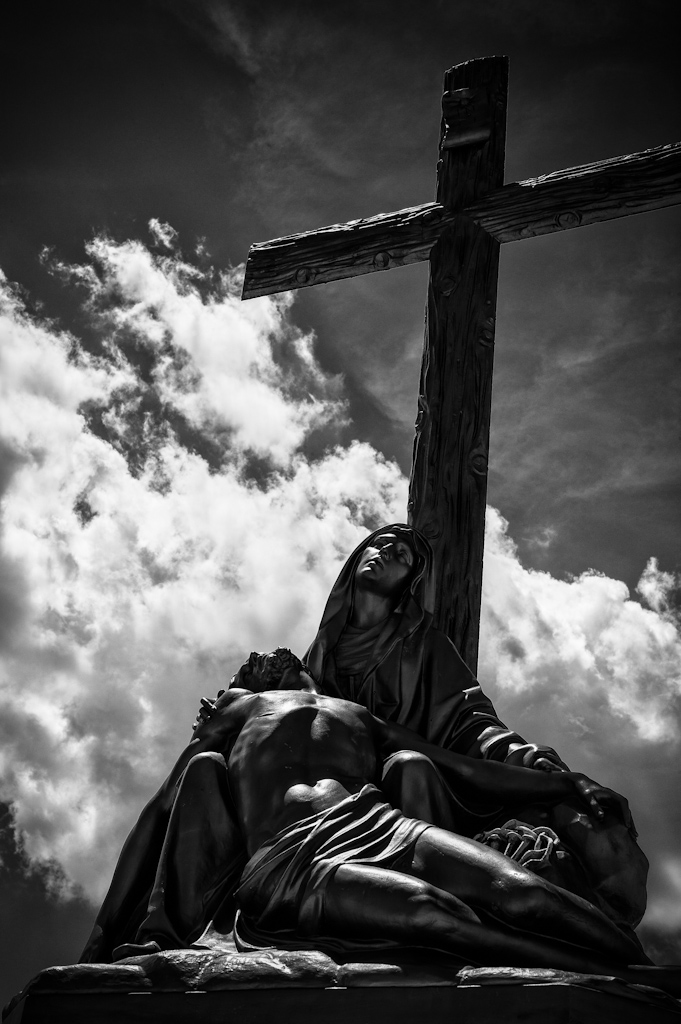 It’s easy to get around New Orleans if you plan to visit the cemeteries. The St. Louis Cemetery #1 and Lafayette Cemetery #1 are just a few blocks from two of the streetcar lines (the Canal Street and St. Charles Ave. lines, respectively). You can ride the streetcars all day for just $3.00. Take the Canal Street line as far as possible away from the river (heading northwest), and you’ll find several remarkable cemeteries, including the Metairie Cemetery, which was my favorite overall. The cemeteries are camera friendly, though most are open only during limited daylight hours. On my first day there (a Saturday), I arrived at the St. Louis Cemetery #1 at 3:30 p.m., only to discover that it had closed at 3:00 p.m. It was open from 9:00 a.m. to 12:00 p.m. on Sunday. 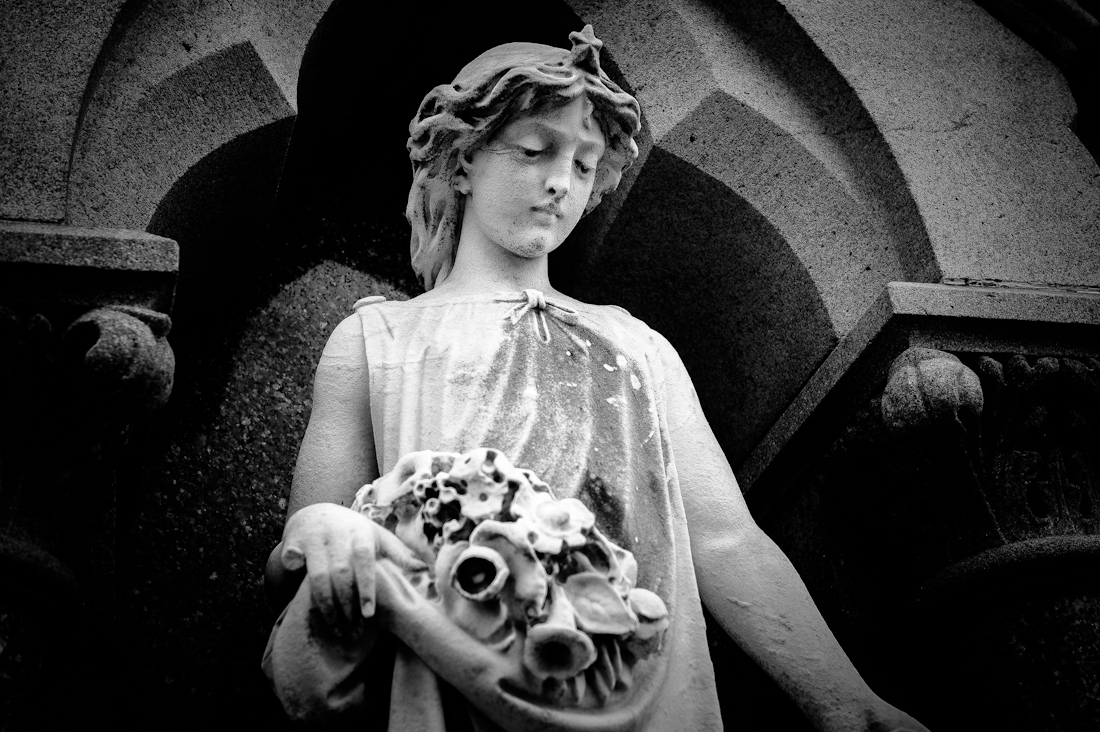 This particular trip followed shortly after the release of Lightroom 4. That gave me a chance to try out the new basic controls when processing the New Orleans photos. In the past, I’ve leaned heavily on Nik Software’s Silver Efex Pro 2 to convert my photos to black-and-white. This time, I explored Lightroom’s built-in toolset, especially the Shadows, Whites, Blacks, and Clarity slider controls. Of the fifteen photos posted here, only two were handed over to a Nik Software plug-in. It was an interesting challenge to try to craft a somewhat different look for each photo, while maintaining an overall look and feel. In some cases, the soft diffuse light allowed me to stress the blacks and push the whites to the edge of being overblown. With harsh sunlight, I tried to boost the middle grays and flatten out the extremes. 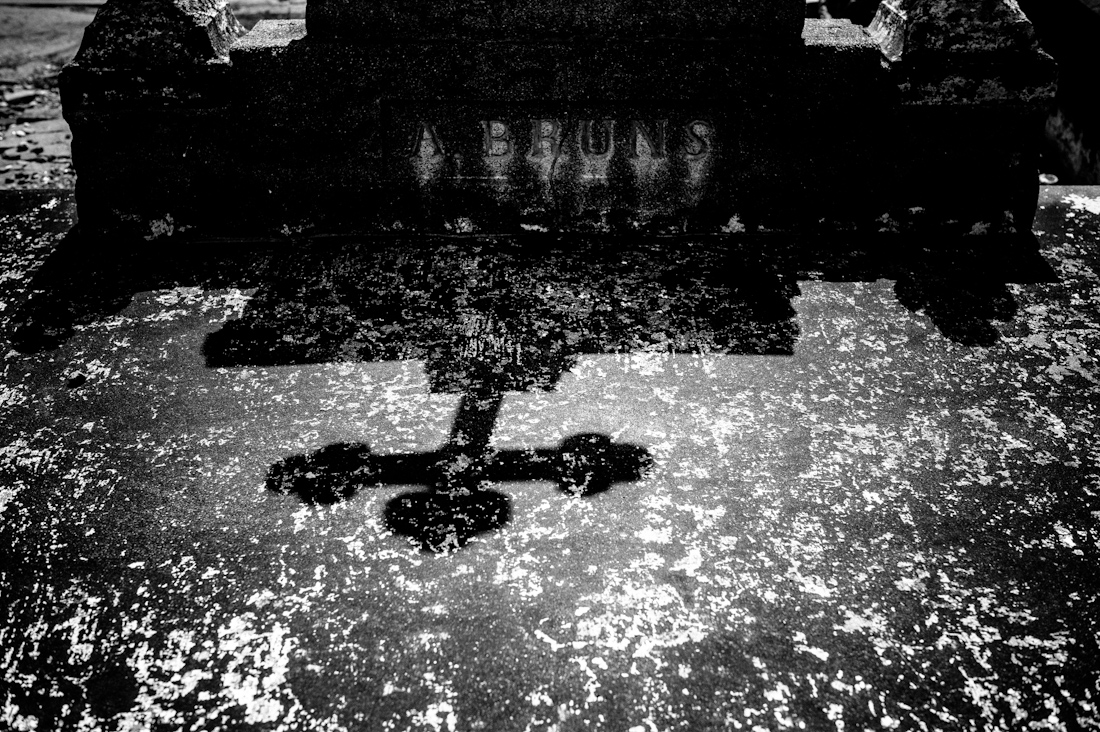 With the photo titled “A. Bruns,” the challenge was to bring out the letters on the tomb without losing the shadows or blowing out the whites in the speckled concrete. The off-centered composition helps to create a sense of unease. And the unusual name on the headstone, with no other inscription, suggests that it may be more than just a name. I was surprised how much latitude I had, just in Lightroom, to give this image a sense of ghostly presence. 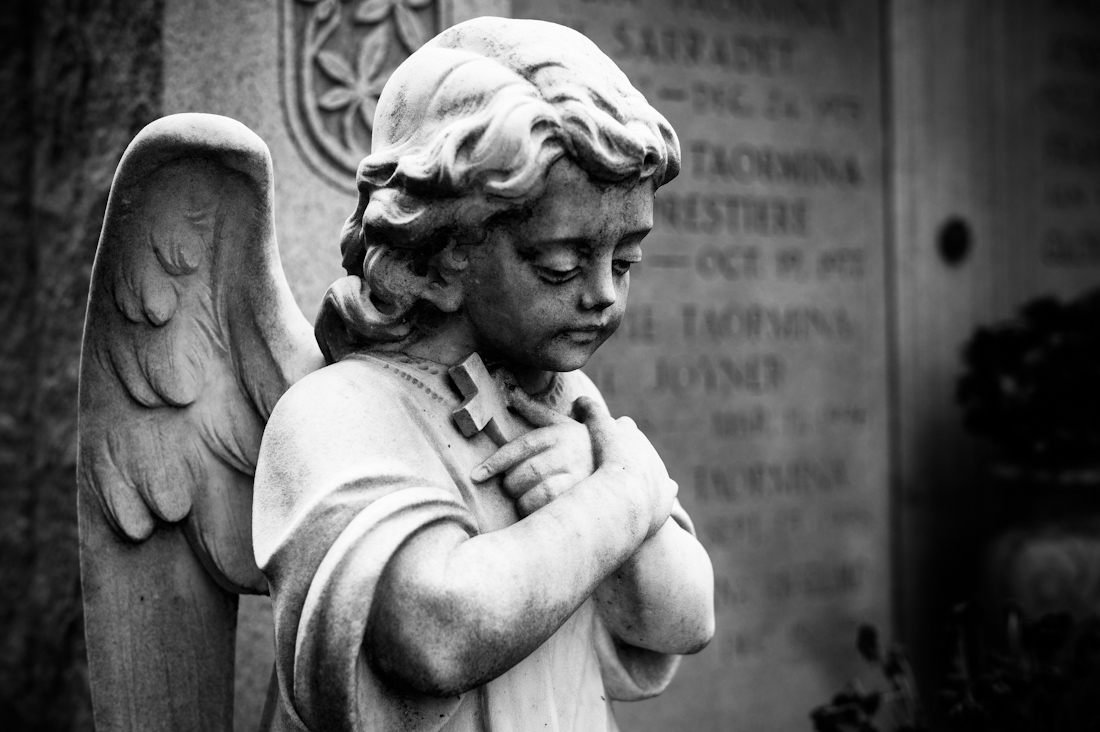 I shot the photo titled “Angel with Cross” on an overcast day with intermittent rain. The diffused light gives the subject a wistful softness. However, if you look at the angel’s eye on the right-hand side of the photo, it’s sharply focused. Because I favor wide-angle lenses, I’m used to working with an extended depth of field. Yet when I see the beautiful bokeh in this photo, I can understand why photographers yearn for the dreamy results of a Noctilux. 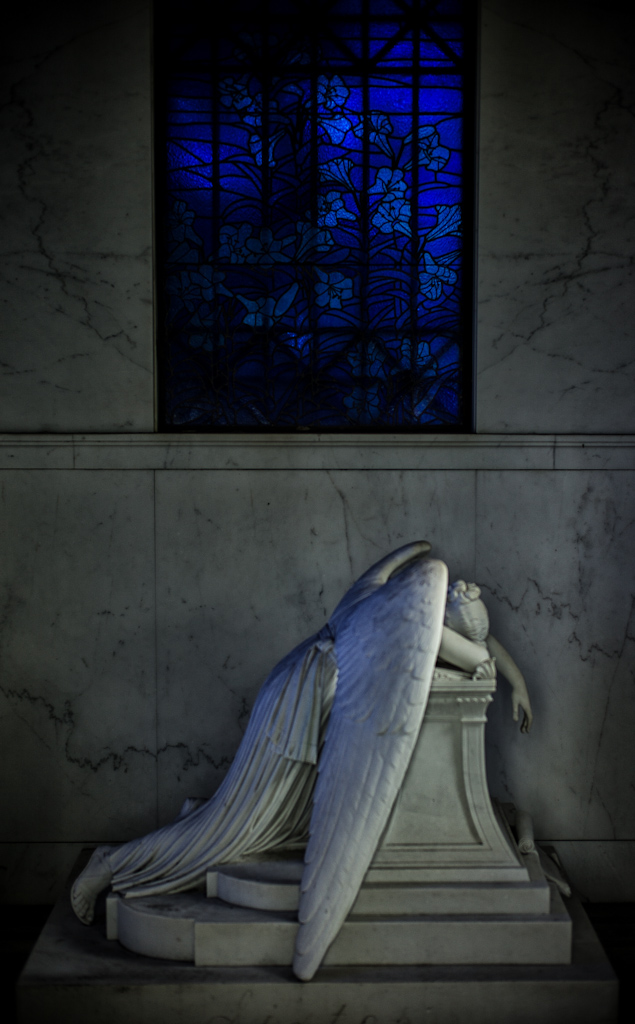 The photo titled “Weeping Angel” is the only color photo in this group. This scene was a complete surprise because I had to peek through a gated door to see what was hidden inside an otherwise nondescript mausoleum. The grillwork on the door barely let me fit the lens through. As you might imagine, this one didn’t work quite as well in black-and-white. I especially like the colors that are reflected on the walls and weeping angel. 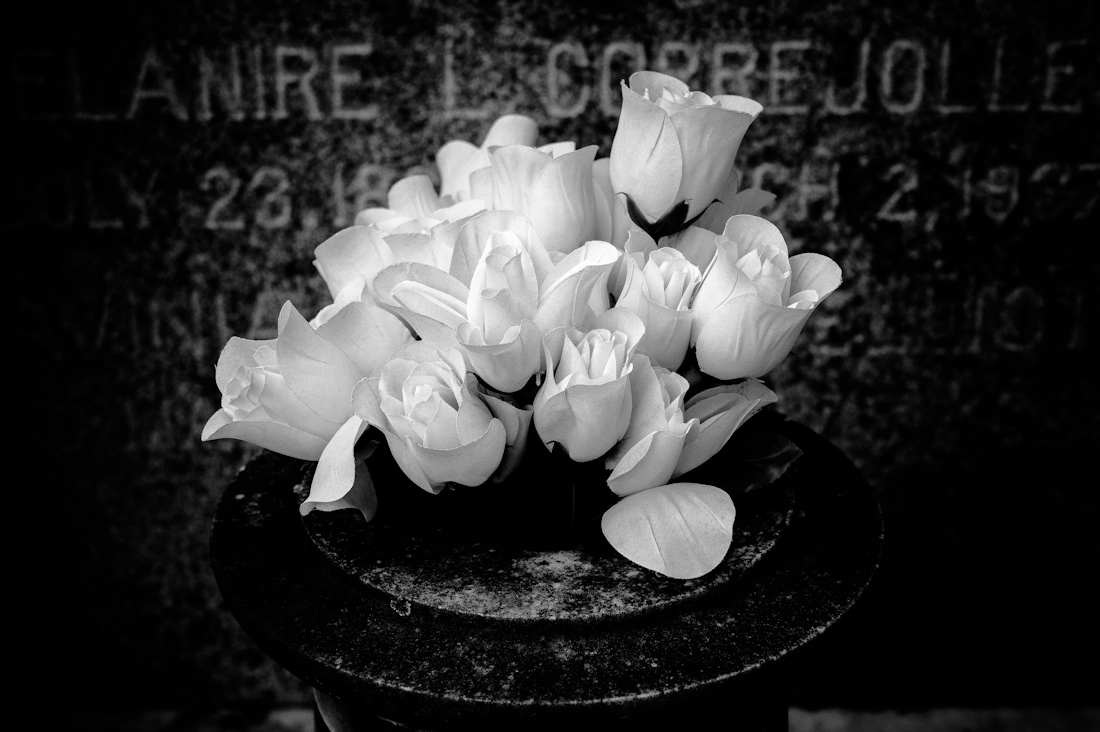 Leica owners often talk about the magical quality of their Leica lenses, where an image may have a soft glow while simultaneously appearing to be in sharp focus. For me, the photo titled “Cloth Flowers” has that special quality. This may be the closest I’ll ever come to a similar quality seen in Beauty and the Beast (Henri Alekan was the cinematographer for that film, as well as for Wings of Desire). Yes, much of the look of this photo is due to the processing, but if you don’t have a strong underlying image, all the processing in the world won’t give you this same sense of wonder and tranquility. 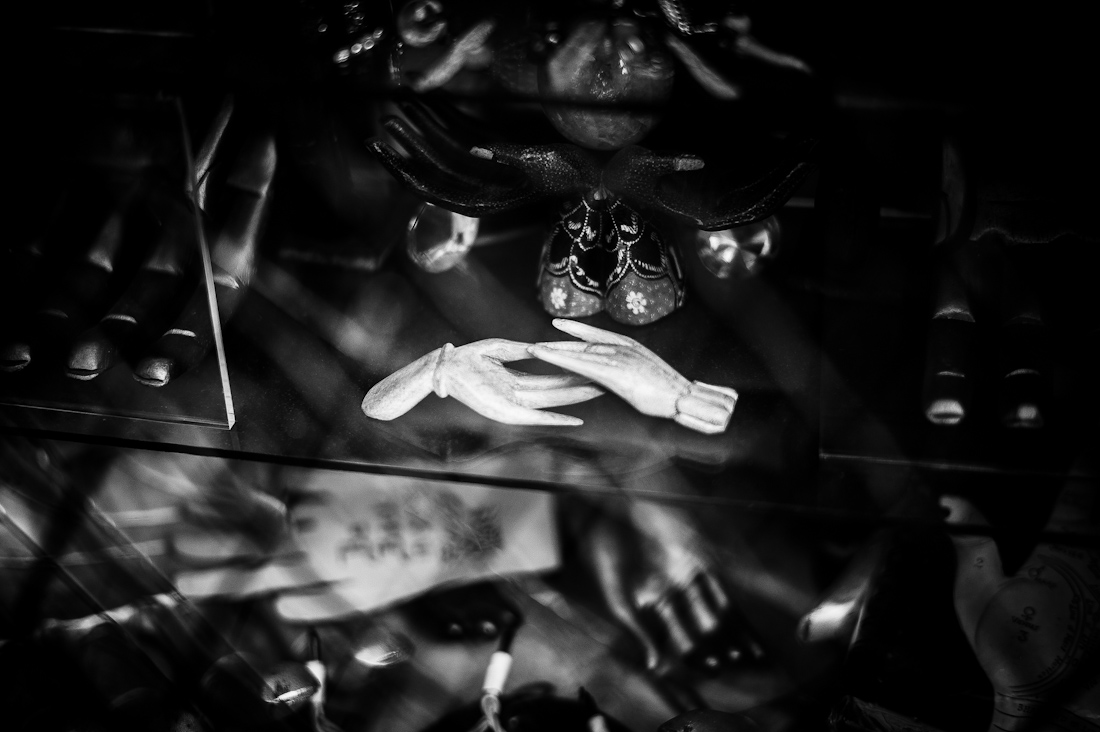 Of course, I did spend some of my off-hours away from cemeteries. I shot the photo titled “Shop Window” while strolling through the French Quarter. It was late afternoon, and I kept to the shady side of the street. As a result, there was gentle lighting on the shop windows with a minimal amount of glare, which helped me capture this intriguing set of reflections and echoed shadows.

As an amateur photographer, I don’t have the monetary feedback that can help tell you if your latest photos are successful. All I know is that I get a strong sense of satisfaction from these images and feel that the experience has broadened my understanding of what I can do with an M9 and 50 lux. I’m also amazed at how much creative latitude you have when processing M9 images in Lightroom 4 using essentially four controls: Shadows, Whites, Blacks, and Clarity.