John Lou Miles is a passionate young photographer who lives just south of L.A. and shoots with a Leica M8, X1 and Leica lenses ranging from 28-75mm. He is an engaging, emerging pro with a wry sense of humor and an astute eye for capturing the contrasts, ambiguities and strangeness of everyday life in the big city. We spoke to the this irreverently ironic free spirit shortly after he followed up his brilliant fine art street photography project, “Faceless Japan,” with an equally revealing portrait of London. Here is the fascinating story of his ongoing voyage of self-discovery and his unvarnished views on the unfolding nature of his unique creative process.

Q: There is an identifiable style that unites your London images and “Faceless Japan” images, and yet they create a different constellation of feelings in the viewer. Can you comment on this and also tell us something about some of the differences you felt in covering London versus Tokyo?

A: I do strive for uniformity of style regardless of location and for communicating a parallel visual narrative. It’s not always on purpose; sometimes a picture of flowers is just a picture of flowers, but I did want to connect the dots between these two amazing cities.

For all of the obvious differences between Tokyo and London, there is a current of over-arching similarity. It is the strong tide of people, technology, style and nature that reminded me of Tokyo when I was in London. It’s a feeling that if you just stopped in the middle of a busy sidewalk in either city, you’d get pulled down by the undertow.

Q: All of your compositions are very simple and graphic and that is one reason they are visually powerful. Do you agree, and, if so, is it conscious or intuitive? How do you use this technique to articulate your creative vision?

A: Definitely. Simple, graphic and saturated.  If I can achieve these then I feel like I’m at the start of making an interesting picture. When I look at the work of Guy Bourdin, I see these concepts executed perfectly. I’ll never get to that level of excellence, but I know for sure that is the direction I will keep working toward. 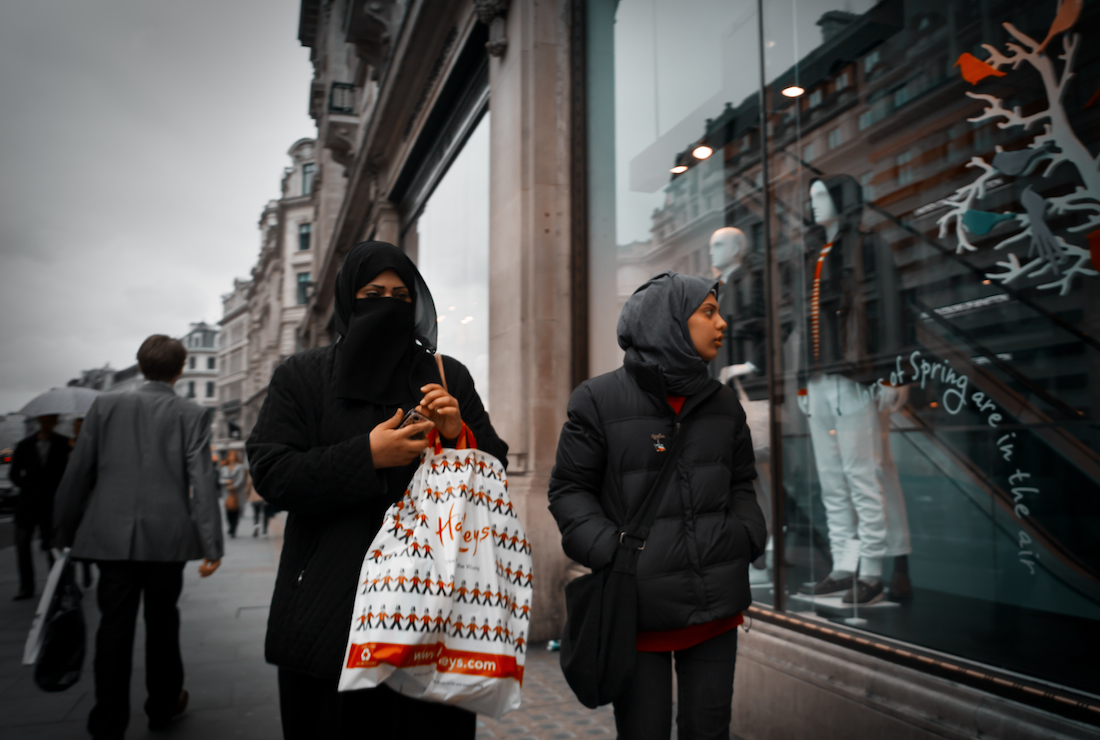 Q: In your London portfolio, there are several images that include partially covered or veiled women, mostly going about their daily business. Aside from documenting the fact that London has a large Muslim population, what were you trying to communicate with these images and what effect do you think they have on viewers?

A: I saw a great deal of elegance in these women, so it was hard to not to shoot when I saw them. I cannot speak for the viewer, but I enjoy seeing the dichotomy between their lifestyle and mine. Viewing those images in the context of the whole collection it becomes obvious how great the divide is. The one truth I did view while in London, regardless of creed (and the same goes for any major city I have been in), is that capitalism is king. 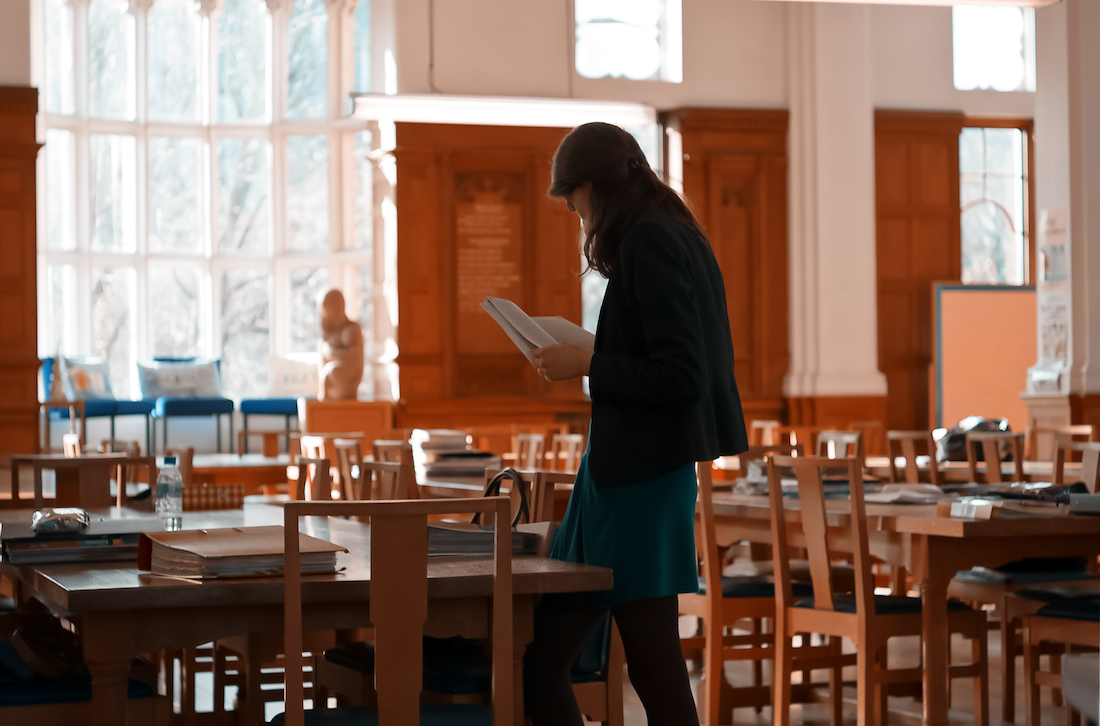 Q: Among your London images there is one of an attractive young woman apparently standing in a classroom surrounded by desks and chairs and reading an open book. It is a lovely, beautifully backlit composition that seems to suggest (with an art sculpture or bust visible near the window) the passing on of a cultural heritage. Do you think this is too grand an interpretation? What does this image mean to you?

A: I like your interpretation of this image because it is closely based on the actual setting. I was visiting the town of Malvern with my partner Sloan Wolf. We were there to tour that woman’s boarding school, which she had not been to since she left twelve years ago. Walking around the school was surreal, as it was so far removed from how I grew up. I felt very out of place and I avoided eye contact with almost everyone we came across. I could not help but be reminded of the book/movie  Never Let Me Go (Sloan confirmed this characterization of her upbringing there after seeing the movie).

We came upon the library that was a warm, sun filled room. There was that one girl lazily standing there reading her book and I could not help but press the shutter release. It was the only picture I took while visiting, and it came out exactly how I remembered the scene. Going to that school brought me back to my youth and my feelings of rebellion. I could not imagine surviving there and I think it showed me how weak I was when I thought I was strong. The respect I have for those girls and Sloan grew stronger as a result of this experience. 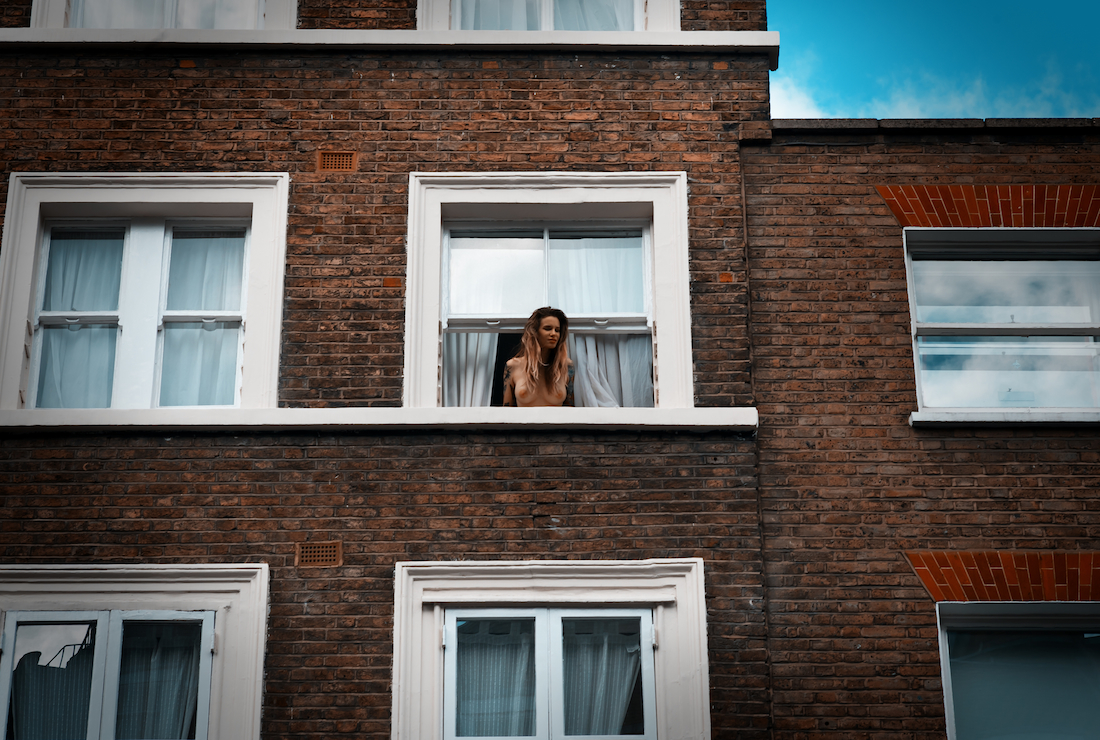 A: Obviously, I’m a fan of the female form, so no matter where I am that will always be an underlying theme in the images of places I visit. In this case, the inclusion was on purpose – to provide a visual and emotional contrast to the women that reside on the opposite side of the spectrum. I’m intrigued by the stark differences between the two and while I’m not looking to offend, I will not censor my artistic ideals.

Interestingly enough when I photographed Sloan up in the window, a dozen or so men and women of various backgrounds walked by. Every single person fixed their gaze upwards with a smile and didn’t stop staring until she was finally out of view. Sometimes I think human nature crosses all the imaginary boundaries we put up throughout our lives and that may be just one example of it. 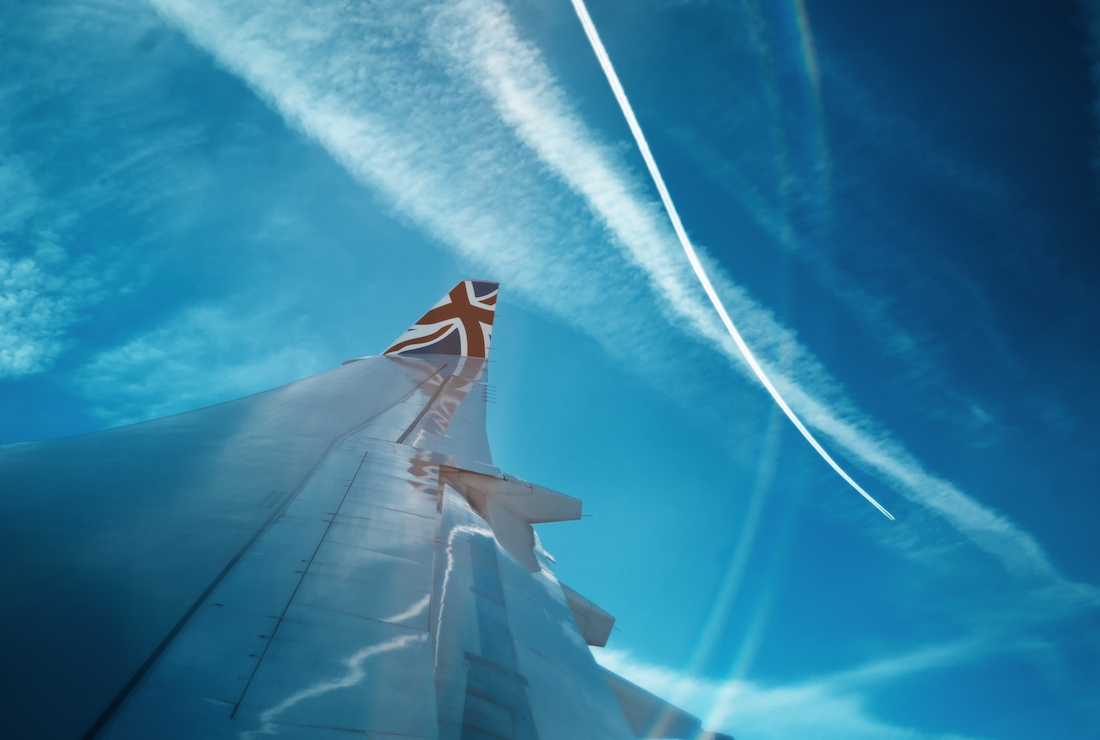 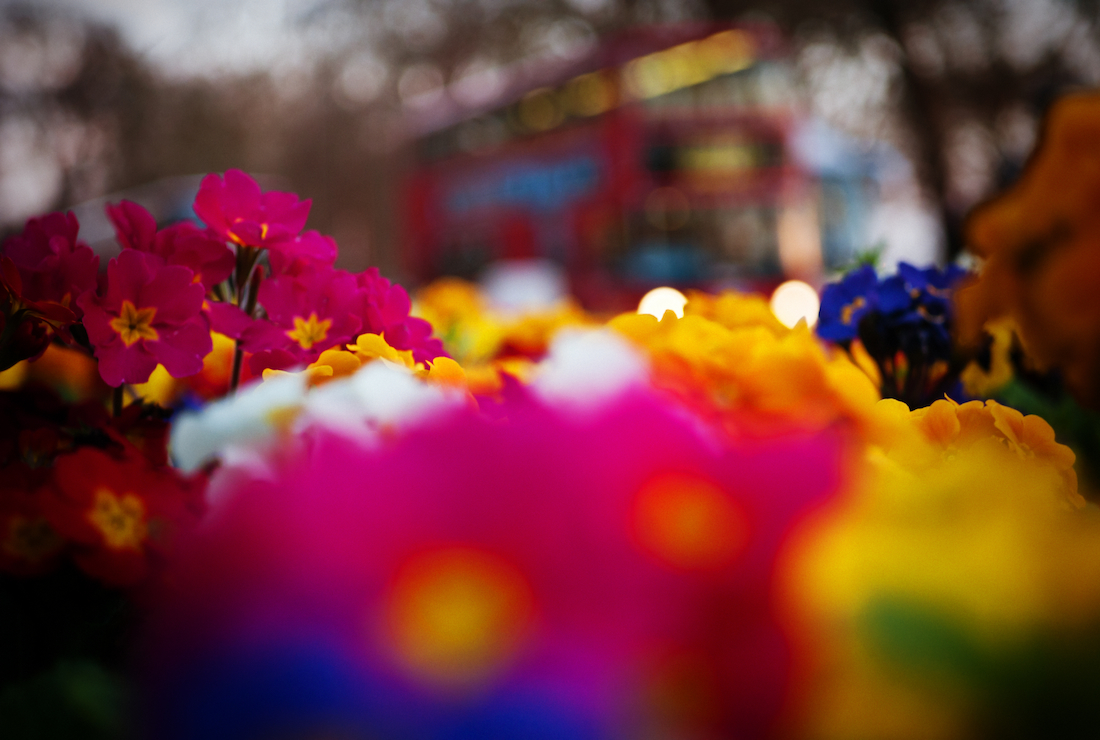 Q: Two striking images that give a sense of London are the abstract image of a Union Jack flying atop a tall modern structure with contrails in the sky and a close-up of flowers with beautifully blurred foreground and background planes. Can you say something about what prompted you to create these images and include them in your portfolio?

A: Actually, that tall structure is the wing of an Airbus A340, but I like seeing it from another point of view. The image of the wing and contrail was taken on our approach into Heathrow. As usual, I had my face firmly planted against the airplane window like a seven-year-old, taking in all the sights and snapping a few photos. I remember there being so much airplane traffic in the sky around us, contrails crisscrossing all over the place, and then looking down and seeing tranquil shades of green unrolling in every direction. I loved the opposing nature of it. Unfortunately, I did not have that Nikon fisheye to capture it all, but I did photograph this scene as we made our last steep turn. I didn’t really notice until I was back in California, but I was immediately drawn in by the vibrant colors, the graphic nature of the image, and the memory of wondering where the people in the other plane were going.

The flowers were planted in a traffic median near Marble Arch. It was that perfect time of day where the orange sunset is reflecting off every surface, including the snarl of rush hour traffic. I wanted to get it all on file so I dropped the camera in the flowers and started shooting. I must have sat on that median for a half an hour, if only because the shallow focus of flowers hypnotizes me. I love watching the colors run together – the camera sensor struggling to differentiate them all. I ended up picking my favorite and including it in the portfolio for the memory of that day. 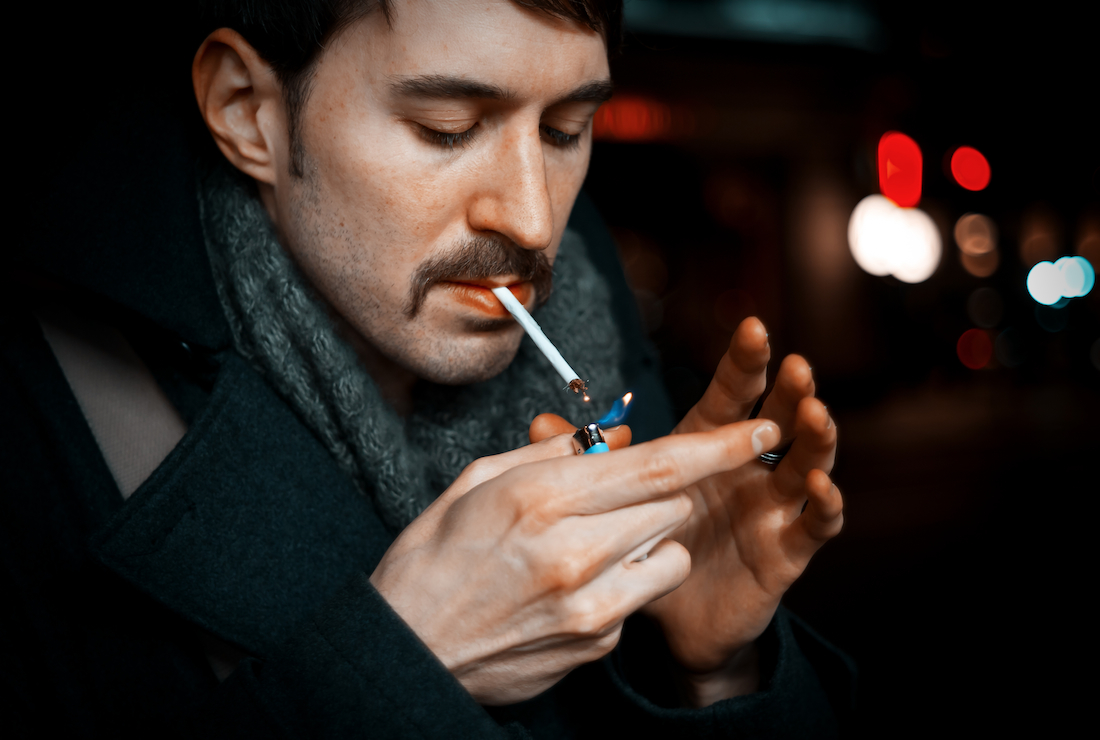 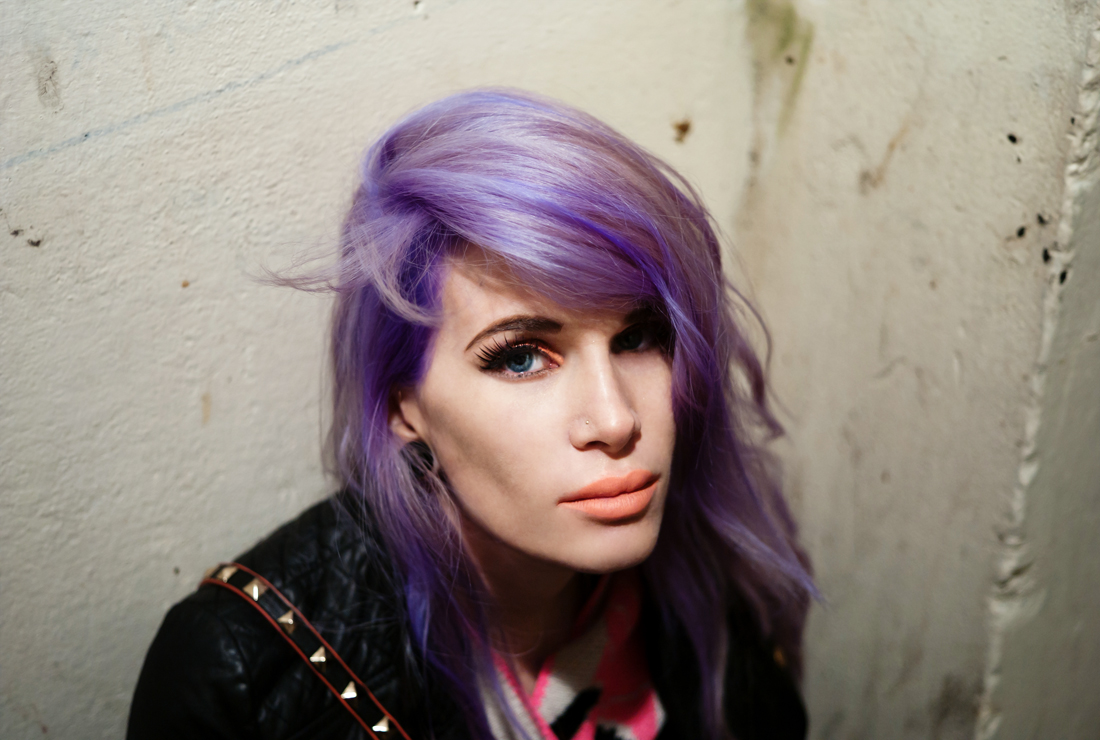 Q: Two compelling close-up portraits in your London portfolio show a young man lighting a cigarette and a young woman with purple hair. What was going through your mind when you shot these images, and why (apart from the fact that they are engaging portraits) did you include them?

A: I included them because I wanted at least two visual anchors in the set of images. As much as I like catching the random and irreverent, sometimes a portrait will tell more of a story. Whether it’s “If my wife finds out I smoked, she’ll kill me”  (said each and every time he lit up that night) or just a crack in the façade, there’s always something there. 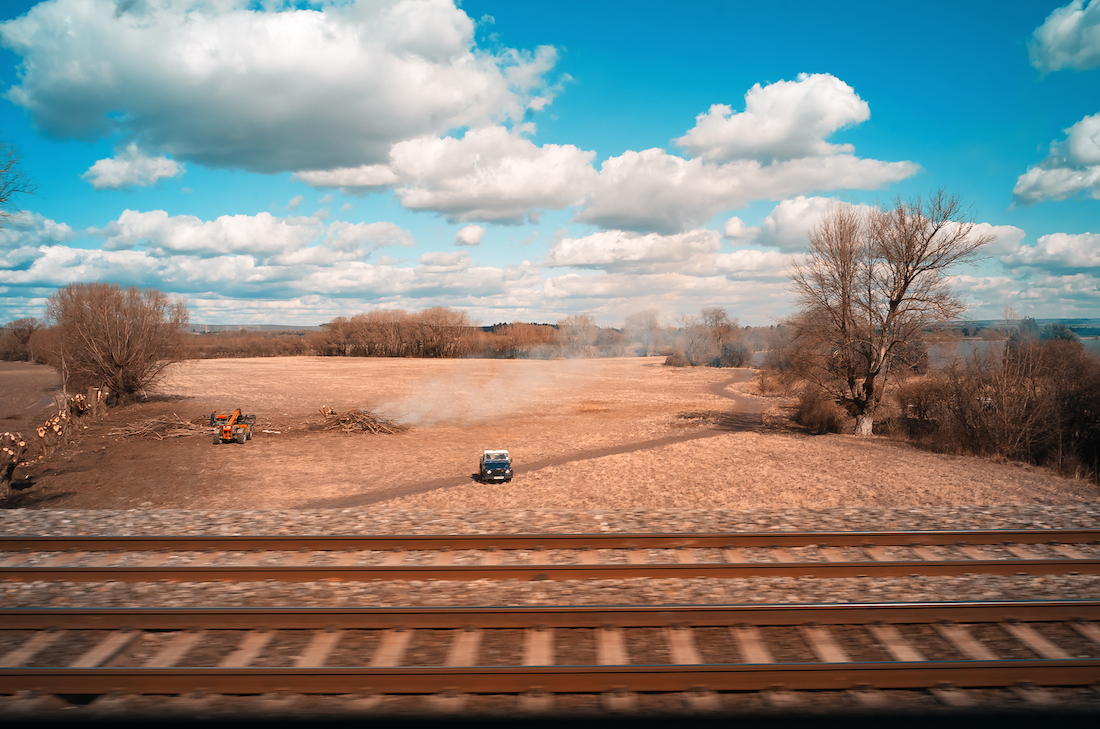 Q: Your pub image is typical London all the way, but your image of railroad tracks traversing a barren agricultural landscape doesn’t look like a typical London image at all. What’s going on here?

A: I had one day out of London and that was on the way to Malvern, as previously stated. That image was taken on the ride out. As funny as it sounds, it briefly reminded me of Hawaii when they burn the sugar cane fields.

The pub was in Piccadilly Circus and I stood outside looking in the window. I do not think one person on the inside saw me take this shot. They were too busy enjoying the night and each other.

Q: What is the next great city or other location you plan to document in your inimitable style, and what is happening with your London images in terms of distribution and showing, other than their being posted on this estimable blog?

As far as this set of images, I think this might be where they reside for the time being. Maybe in the future some of them will be part of a bigger collection, but I’m not sure how they stand on their own right now. Time will tell.

To learn more about John and view his other photographs, visit his website.