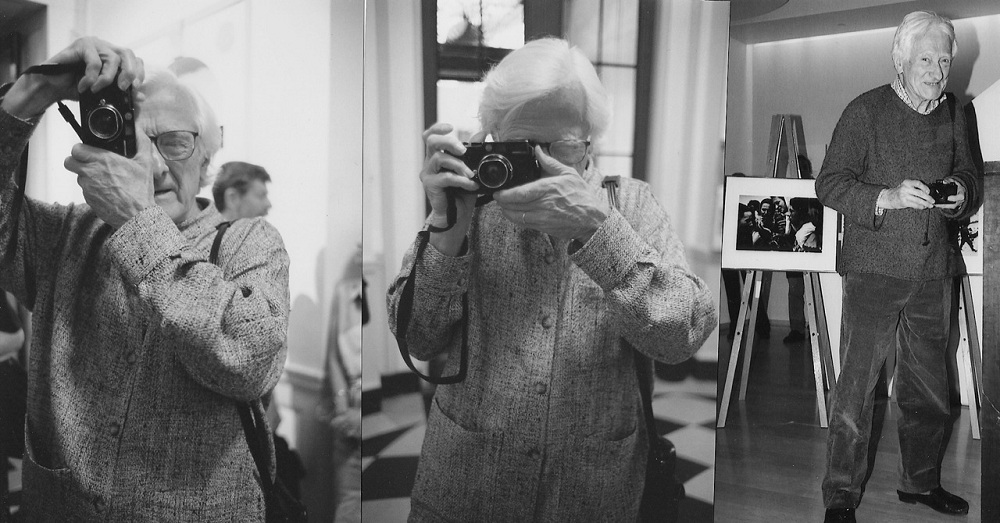 I first met Marc Riboud at the International Center of Photography.  When I went to take his photograph, he lifted his Leica and took a photograph of me.  I thought then of an interesting concept: “who is this Leica photographer, hiding behind his Leica?”

He was Marc Riboud “tasting life 1/125th of a second.”  After many years of knowing him and photographing him, he never hid behind his camera.

Marc Riboud was concerned about people.  Coming to photography by chance, he inherited an old Leica from his father.  Born in Lyon, France in 1923, he was invited to join Magnum in 1950 after he showed his photographs to Cartier-Bresson. He was one of the few Western photographers permitted to travel and photograph in China. After joining Magnum in 1953, Life magazine published his iconic image of the Eiffel Tower.  He has said, “We all do the same things, only is possibly different ways.”

Because of his many interests, it has taken him to countries throughout the world.  He has traveled to Asia and the Far East to record between ancient cultural civilizations the political and sociological movements of the second half of the 20th century.  It has been said that Riboud “saturates a picture of Riboud’s work,” Claude Roy, in his introduction to Marc Riboud: Photographs at Home and Abroad describes Ribould’s work, “attention to composition..carefully thoughtful, supremely elegant…concentration deliberation, the cultivation of the probing eye…making a person in even the most foreign of lands feel as though he is on familiar ground”.

Marc Riboud says, “I have always been sensitive to the beauty of the world and of people, rather than to violence and monsters.  For me to discover rhymes and rhythms in my view finder is still an immense pleasure.  My contact sheets reveal also how passionate I have been about numerous causes.  I don’t regret it.  Life would be sad indeed if we wouldn’t dream to change it.  There are different ways of seeing.  I have mine.  For me to look at and to photograph a street scene or a misty landscape is somehow like listening to music or reading poetry.  It helps me to live.  After fifty years of photography, have I changed my way of seeing?  I don’t think so…Young photographers innovate. I admire them.  For me, photography is not an intellectual process.  It is a visual one.  The eye is made to see not to think.  I like Walker Evan’s definition of a photographer; ‘a joyous sensualist for the simple reason that the eye traffics in feelings not thoughts.’  Our language is based on the eye for pleasure of the eye.  What I am looking for is in life, in reality.  I don’t believe too much in pure creation.  My obsession to photograph intensively the most intense life.  It is a mania, a virus as strong for me as the instinct of independence.  And if the status of life diminishes, the photographs fade, because taking pictures is like tasting life intensively every 1/125 of a second.”