Ben Lieberman is a New York City based photographer with a background in clinical psychology. He spends his time capturing the diverse people and vibrant culture of New York City. Alex Coghe, the interviewer, is Leica Blog contributor.

Q: Hi Ben, when did you first become interested in photography as a mode of expression, an art form, and when did you realize that it could be a profession for you?

A: Diane Arbus & Bruce Davidson remain my touchstones since I took my first photographs sometime in 1961-62. Encountering Diane in Washington Square Park working the denizens like an open zoo, she brought a new sense of wonder into my life. I hadn’t even achieved the status of a teenager yet, but to me, Diane was like a Voodoo Princess, able to hypnotize her subjects. Later, in my teens, with more freedom, I sought her out in Times Square, Washington Square Park, the Far West Village, Central Park and in Midtown Manhattan. In the sixties, Diane was like the Mayor of Nocturnal Times Square. Everyone knew her and the band of gypsies, clowns, and principles of the various freak shows, sex emporiums, houses of horrors and all the “unusual” that came to be in her orbit. She instilled a vast sense of wonder about all the people that come into focus in my viewfinder. Diane once silently stared into my eyes. I still can’t express it with words, but that’s of no consequence. I have a camera.

Bruce Davidson was just as genuine and fearless in his humanity. His study of Harlem’s 100th St. remains the bedrock. In those frames, he has plumbed the very depths. His Circus work is as good as it gets. Visually & technique wise, he’s my master.

In 1964, the World’s Fair in Flushing Meadow provided an opportunity that most twelve year olds seldom get. A very close friend of my parents owned one of the largest postcard companies in the world. Some of my pictures were sold and it was a very fine thing. 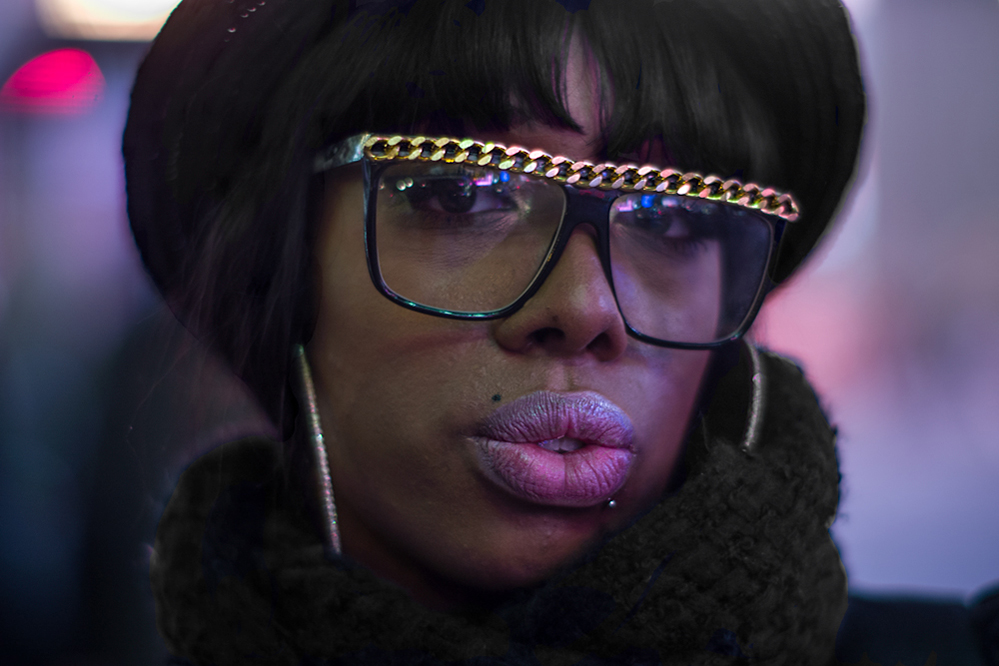 Q: How would you describe your visual research?

A: I’m a Clinical Psychologist, by training. I love to explore the world of people. It’s really an exploration of my inner world and how I can express what I’m experiencing. It’s also very powerful reparative therapy.

Q: Was there a photographer or type of photography that influenced your work or inspired you?

A: Street portraits have come to dominate my work in recent years. I love to swim in the milieu of wherever I am in that moment. As I mentioned, Diane Arbus & Bruce Davidson have had the greatest influence and provided the inspiration.

Q: For me your work in Harlem is awesome. Can you talk about how you build relationships with the people you photograph?

A: Be genuine and honest with others and most importantly, with yourself. My family moved from 10th Street in Greenwich Village to Harlem in 2009. Today, Harlem is like the Greenwich Village of the late 1960s – early 1970s. Every language is spoken on the streets. The diversity is like no other I have experienced. There are so many experimental artists in Harlem. Pushing the envelope socially, politically, visually. When I started to shoot street portraits in East Harlem, gang members warned me not point my camera in their direction. Within a short time, they wanted to have group portraits to bring home. It’s about inclusion and coming to embrace that we are much more the same, than different.

Tucked in between are the holdouts, those that have remained almost frozen in time. Many have become welcome cohorts and collaborators. Many older residents tell their stories while sitting on the stoop. I use myself and my cameras, crafting portraits together. In the mid 80s I completed my Doctoral Studies at Columbia, in Morningside Heights and had spent a fair amount of time in Harlem. I was involved with various projects & clinical outreach. My son was born in Harlem one beautiful Passover evening. 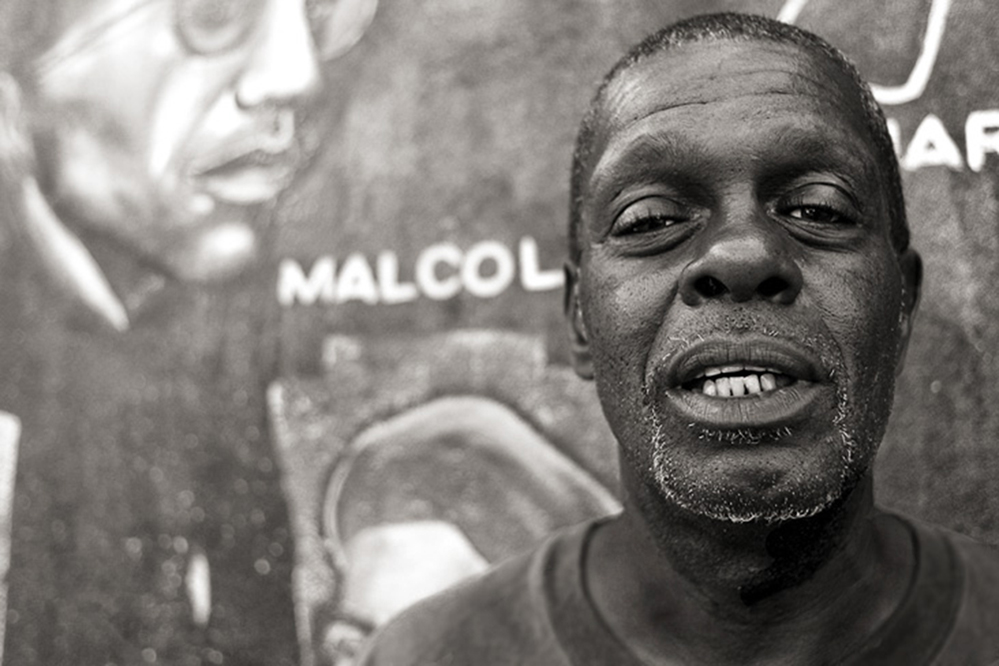 Q: What is your equipment, currently?

A: Leica was always been my preferred tool. I bought my first M3 from Ken Hansen in 1973, in NYC. In the M series, I currently use a variety of M lenses with my M8, M3, M2 and a CL. The CL is unique. In winter, I can put on a woolen glove & the camera becomes invisible on the Subway. It’s silent as well.

My portrait kit is the R8/DMR & 80 Summilux. Nothing comes close. I also have two additional Leica R8 film bodies with MotorDrive. They have never failed me. The build quality is second to none. I can hammer nails all day with them.

I have three Hasselblad bodies with an assortment of lenses. I shoot only B&W with film. TriX 400. I love the square frame.

A: In the early 70s I had a job in the Photography Department of the United Nations. Many NYC newsprint photographers covered the UN. I was able to view everyone’s work. Although most used Nikon file cameras back then, the best frames were usually made with Leica lenses, which were seated on Leica cameras. They are a world apart. Staff photographers would recommend certain lenses, like the 35 Summilux & Summicron, that came to dominate photojournalism. I spent a lot of time in Olden Camera & most of whatever I earned was deposited there.

Q: Talking about your style. I have noticed a particular thing in your projects on your website: the people in your pictures have some similarity with the environment that they live in. Am I wrong?

Q: I call it invivo. I try to be invisible, so that the people in the dance feel right at home, which in Harlem is very easy. I’m not a stylist. ‘Do No Harm’ is the most important thing for me. Let the subjects make the choices. It’s my job to be invisible, but not absent. 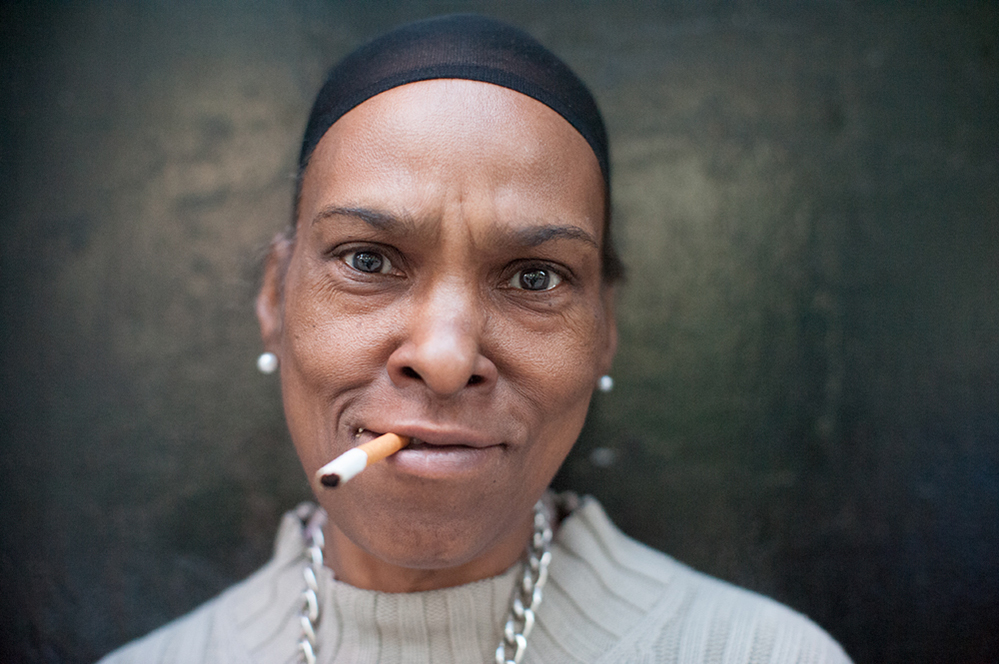 Q: Is there something that you have not shot that you would like to shoot?

A: Yes!! I’d love to be slung on a harness, way out to windward, on one of the America’s Cup catamarans. I’ve been sailing my whole life.

Q: I see your approach to the image really straight. Is that true?

Q: I’m not sure what’s “true”. I enter into a dance with the subject and try not to get in the way. Sometimes they want to show you who they are. Sometimes they don’t. I’m not there to force the issue. Most of the choices are not made by me. People can’t help being themselves, if you let them.

Q: What has been your most memorable assignment in your career and why?

A: I have had the pleasure of collaborating with some very interesting people. In the early 70s, some colleagues & I filmed & produced small documentaries about various religious cults in NYC. These ran on what was then called “open cable access”. Some famous, some infamous. I was witness to the destruction of the South Bronx in the 1970s & early 80s. The almost complete obliteration of that community and the attendant loss of life & hearth left the deepest scars. In a senseless war between real estate investors and lifelong community residents, many innocent people lost everything, including their lives.

Q: What would you like to be doing in 5 years from now?

A: Walking on Broadway with my camera.

Thank you for your time, Ben!

Alex Coghe is an Italian photojournalist currently based in Mexico City whose professional activity ranges from editorial photography to events.