Born and raised in Nice, Nicolas Hermann later moved to Paris at the age of 18. After receiving his baccalaureate, he began a course in language studies, which was interrupted when he pursued a different path, that of a real estate agent. He has now been running his own real estate agency, with a close friend and business partner, for five years. A couple of years ago Nicolas discovered his passion for photography which was instilled in him by his mother’s best friend and mentor, Richard Geneste. He recently took a trip to New York City and shares his images and thoughts below.

From all the photographic experimentations I had the chance to experience until now, New York remains the most thrilling. The contrast overrunning this city nourished with agitation, energy, extravagant personalities makes it incredibly captivating. I had the feeling I needed to accomplish a mission, not only in my artistic pace, but also the choice of the material I will be using.

I went in pursuit for emotions, the understanding of the human being in its social environment. Diversity, individuality, the approach of photography based on the isolation of the character, the distress expressed in its greatest beauty. Vacuous from drama, filled with dignity, yet fatalism. New York is a great theatre, bringing together protagonists following their destiny, staging slices of life where capturing the magic of the moment became my primary objective. 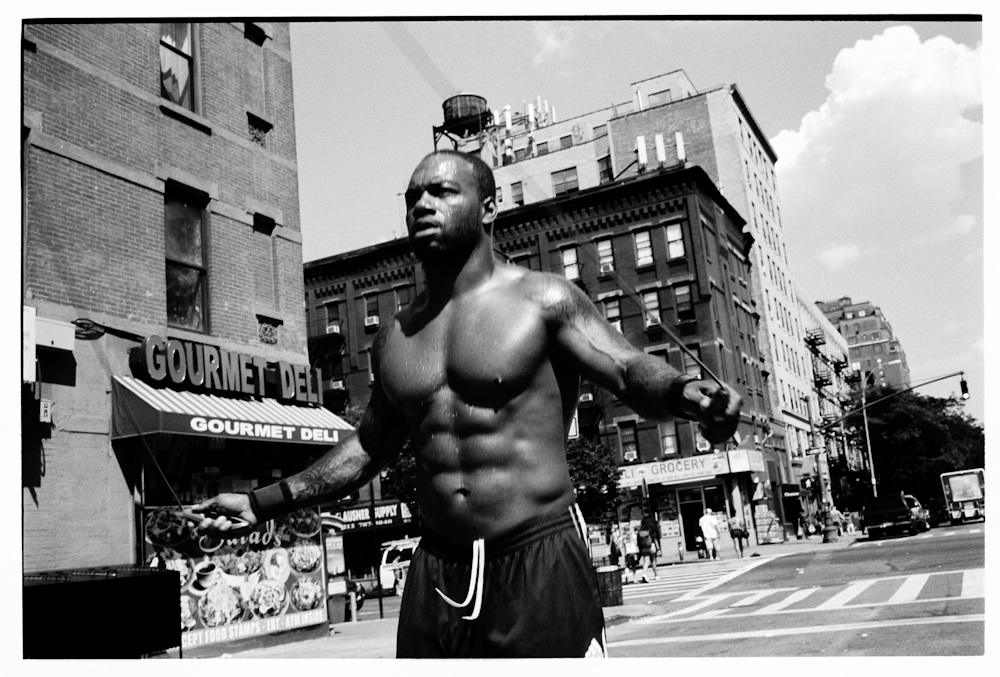 It is a story made of encounters, coincidence, a turn round the corner. Sometimes, it is a matter of a fraction of a second, for others it is about a few moving words, sharing a page of their story. The boxer, skipping in the middle of the street, free and half-naked, alone against all, with an abrasive look and bulging muscles. I had trouble to win him in, until he decided to take part in my project. 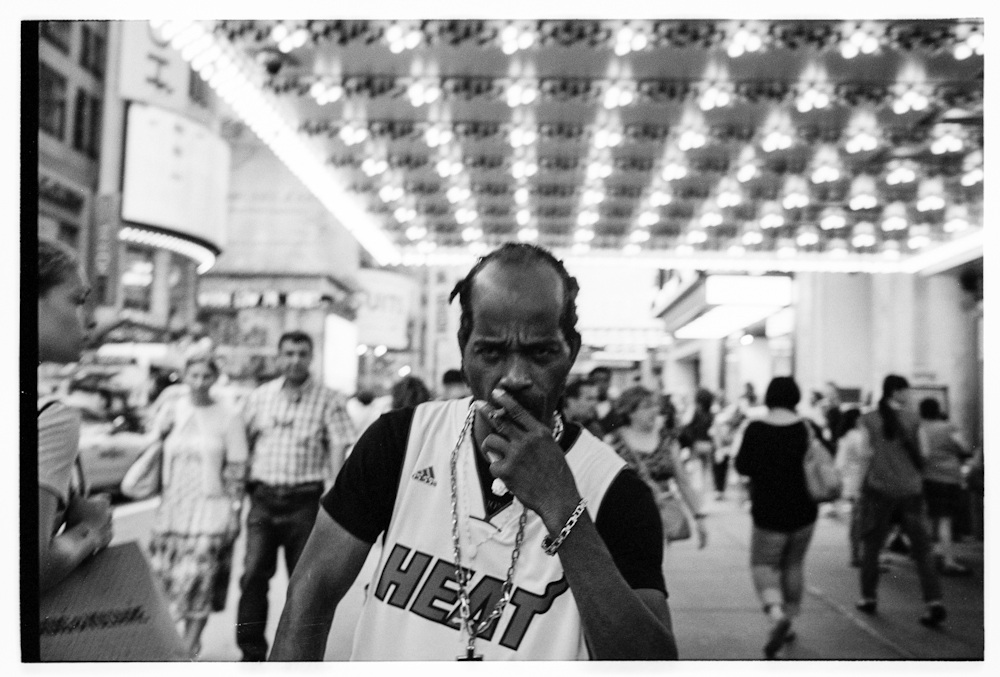 Sure-footed, sharp-eyed, wedging a cigar in his half-opened mouth, I cannot say if is a rapper or a gangster, whether he is about to release a disc or pull out a shiny knife. 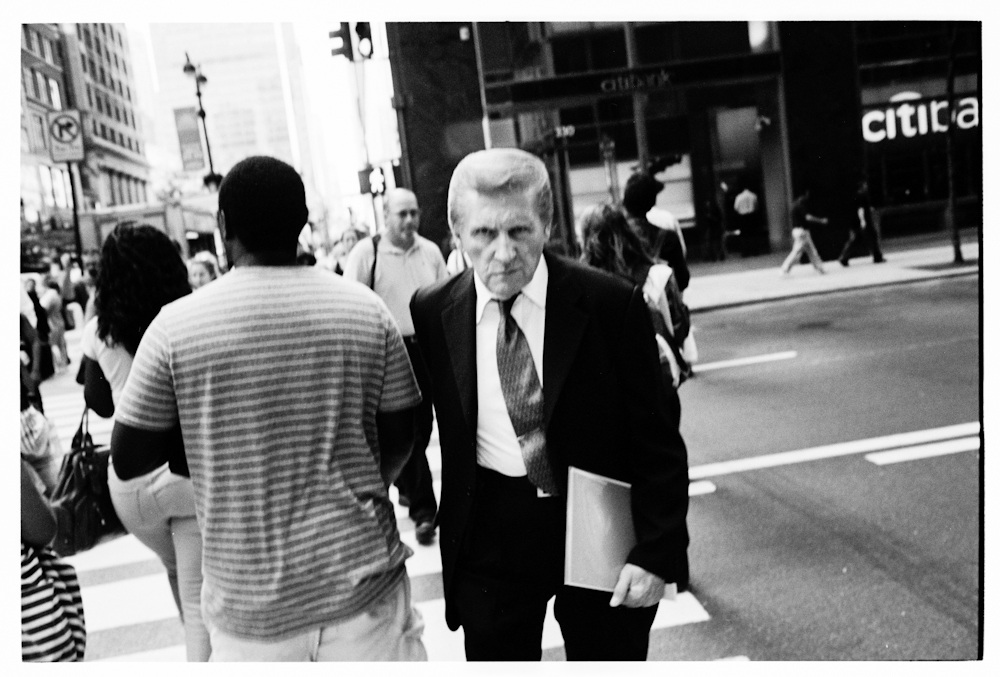 This business man taken into the turmoil of the crowd distinguishes himself from others with the fierceness of his attitude, just like a trader quick on the draw for a stock option, and until his last breath. 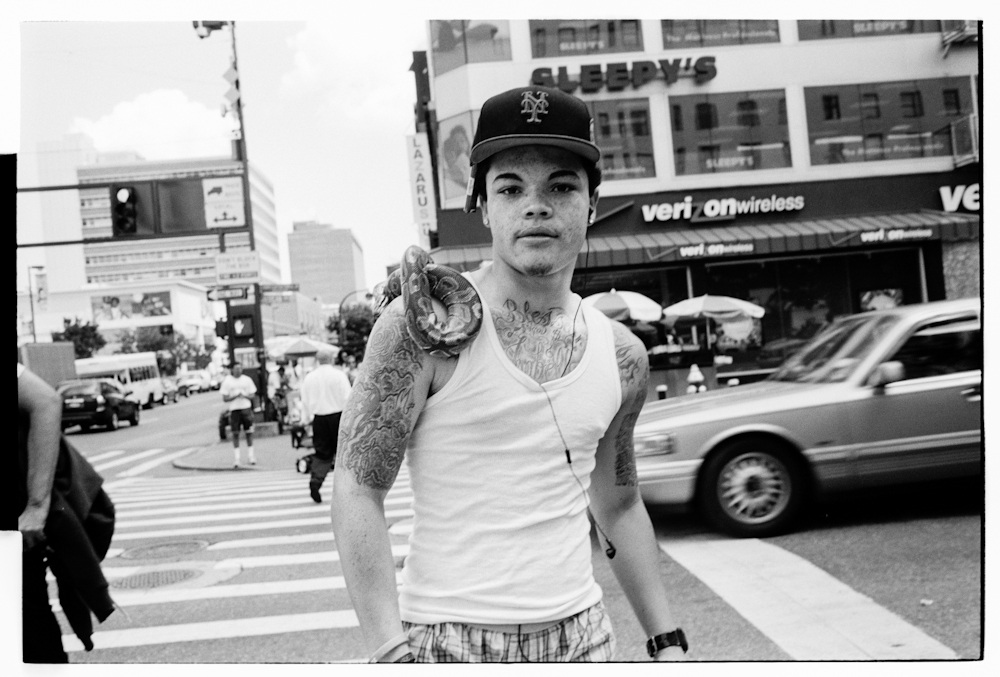 And what about this young man from Harlem, the hint of a smile and a snake on his shoulder, tattoos all over his body by wave of distinctive marks, in search for his identity in New York’s hive of activity.

Through those characters, I wanted to understand the polarity of New York ; its hugeness as its neighbourhood life, how to switch from outstanding to desperation, the multiplicity of parallel lives cohabiting, yet creating the uniqueness of its energy. On one side, Wall Street, the fifth avenue, exacerbated depiction of the American dream. While on the other end, the marginalisation of the left-overs, the underground as only shelter, theatre of a suffocating disillusion.

How do they resist to the acute pressure of its architecture, and how despite all that, are they clinging to life and keep on trying to exist? New York could be the representation of surprise. We never know “what”, “when” or “where”, but “this” is going to show up, “it” is going to happen. You find the emotional richness, a glance that opens your eyes, a sight of view which changes your perception, an errant creature tearing you apart.

To support my project, I wanted to make my photos of New York with the rangefinder again, my analog Leica MP, which enables to work in hyper focal distance. This way the focal depth range facilitated my effectiveness to capture the decisive moment. 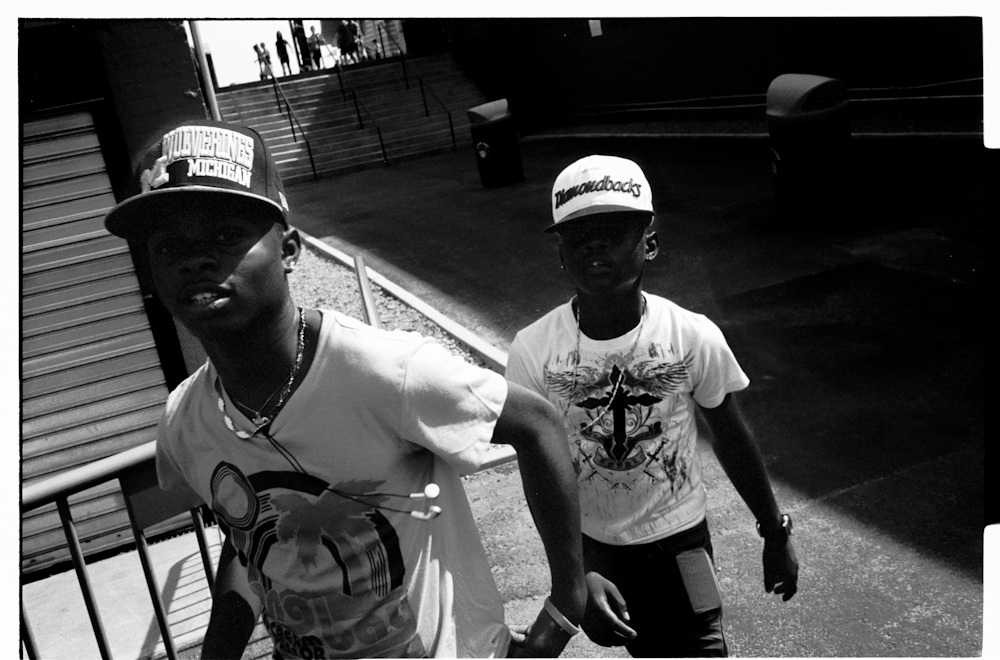 I couldn’t have had the same result with another camera. Indeed, its lightness and handiness brought me a great flexibility of use. As well, I could work closely, and create an atmosphere of intimacy with the character. For example, concerning the portraits, its little size put me in a comfortable and stress-free situation with the character, a certain confidence I couldn’t have had established with a bigger camera (which could impress or weaken).

In my approach, I decided to impose myself a type of image : one film camera body, one 35mm lens (35 mm Summicron), and only one type of film, the Kodak TRI-X 400. The 35mm lens, captures at the same time the person and its environment. When I shoot a photo, I try to frame the most precisely in function of my photographic intention, to be the most similar to my vision (none of the photos have been re-framed) and to keep an optimum quality of image.

This is a course of action I want to follow in my artistic approach and the choice of the material. Eventually, the film TRI-X 400, is unique to me : not only for the depiction of the film, but for its texture, the picture grain, which gave me the chance to reach a level of estheticism and an atmosphere close to cinematography.