Preedee Ponchevin was born in Bangkok, Thailand in 1979 and he still resides in his home city. He graduated from Kasetsart University in 2001 with degree in electrical engineering and went to work designing software systems. In 2009 he became interested in photography and began studying the medium. He has been shooting ever since and doesn’t think he will ever stop, but he does make time for other interests such as listening to old music and viewing other mediums of art like painting. In a previous blog post, we explored Preedee’s street photography on the devastating floods that hit Thailand in 2011. Here, Preedee shares his images and experiences at the 2012 Songkran Festival in Bangkok.

Q: Your sensual and exuberant images of the 2012 Songkran Festival in Bangkok certainly convey a different feeling from your somber images of the devastating floods in that great city. Can you tell us something about the festival itself, what it means and why you decided to document it?

A: Songkran is a Thai traditional New Year which starts on April 13 every year and lasts for 3 days. Songkran festival on April 13 is “Maha* Songkran Day” or the day to mark the end of the old year, April 14 is “Wan Nao” which is the day after and April 15 is “Thaloeng Sok* Day” which the New Year begins. Songkran means “movement” or “changing” since according to Thai astrology, the sun will move into a new sign of the Zodiac on this day. Songkran is also called the “Water Festival”.  Water is believed to flow and wash away all bad omens during this time. Thus, it is a time for cleaning houses, villages, temples and spirit houses. Songkran Festival celebrations are held in many provinces in Thailand. Each province is unique and different depending on local traditions and religious culture. But I choose to take pictures in Bangkok because I am interested in the issue of the Songkran Festival in a city with high social change.

Q: We assume that you shot your festival coverage with the same Leica M6 you used to cover a national tragedy. Is that so, and which lens or lenses did you use?

A: For all shots of Songkran festival, I used both the Leica M6 and DSLR. For lenses, I used Summicron-M 35mm f/2, Elmarit-R 19mm f/2.8, Summilux-R 50mm and Summicron-R 90mm f/2. In addition, I also needed waterproof protection equipment.

Q: While the emotional content of these images of people enjoying themselves in a totally uninhibited way is far different from the people shown in your flood portfolio, you approach both subjects with the eye of a photojournalist, and there is clearly a connection between them. Do you agree, and what was your intention the same in both cases?

A: I think it’s different. For my flood portfolio I focus to tell the story via symbol, mood, color, location. But for the Songkran festival, I focused to pause the feeling of the people found in expression through the face, eyes, action, etc. If you spend more time with people, it will help build trust and show that you are approachable and friendly.

A: The beauty of the old culture that is being the storm of social changes. The majority of Thais are Buddhists. Therefore, in the ancient traditions of Thai, Buddhism is involved. But today’s Thai society is open to foreign religious culture and more sex, provocative dress, etc. There were many locations celebrating Songkran Festival in Bangkok, some famous like Silom Road and Khao San Road, where most of my pictures were taken. Khao San Road is famous for nightlife, and it’s a famous tourist destination for foreigners because it has a lot of pubs. For big festival like Songkran, all pubs have a big surprise for foreigners and may show outdoor dancing from the third sex. The mysterious forefinger of a pornographic glove like that. I wanted to show the evolution of play equipment that changed the way society has become more open. 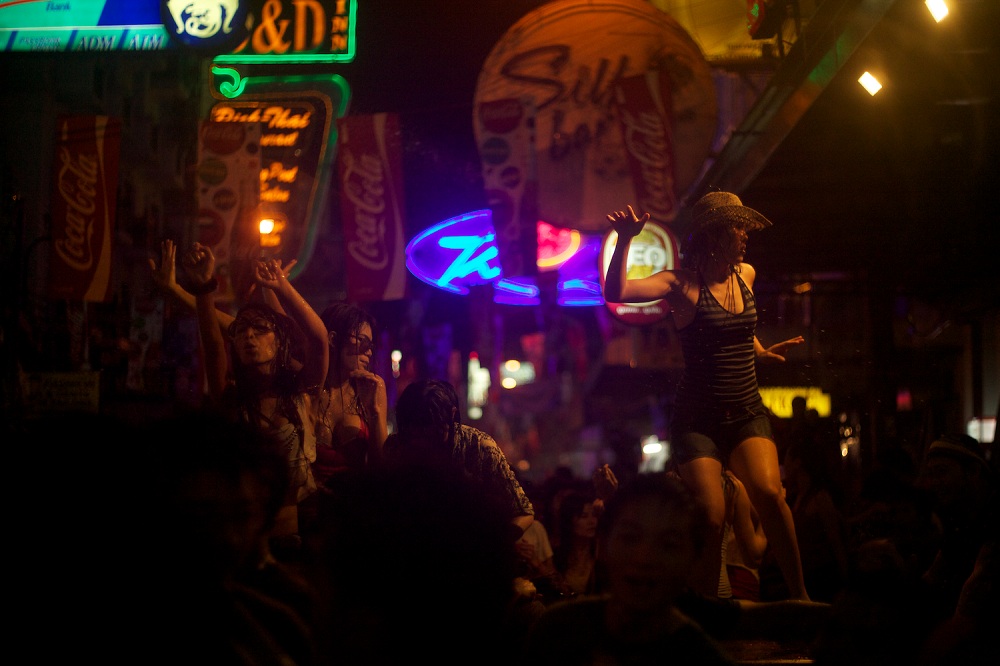 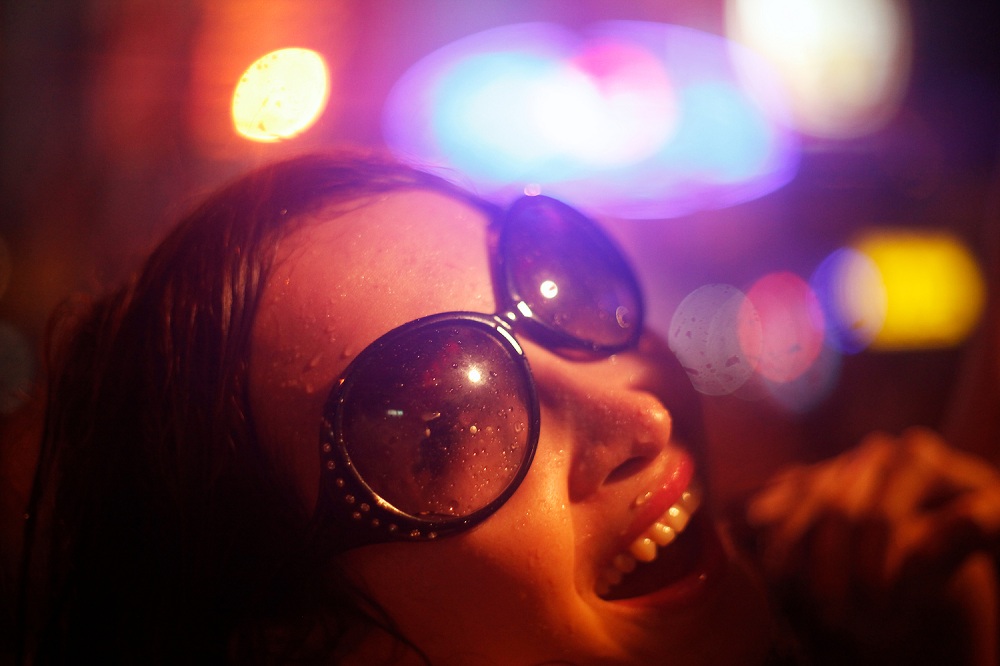 Q: As with your previous pictures, most of these images were output in black and white, with the exception of two in color—a close-up of an ecstatic young woman wearing big glitzy glasses, and a party scene with a slinky young woman in a striped blouse. Why did you favor black-and-white for most of your images, and why did you output only these two in color?

A: I love black and white because black and white photos really have a different mood, which is presented by the different contrasts, subtleness, shadows and other factors. I’ve shown two images in color because I think the color and light shows well in the night of the festival. It should not be overlooked. For color images, the two images are taken at Khao San Road. It shows of the third sex dancing outside the pub. 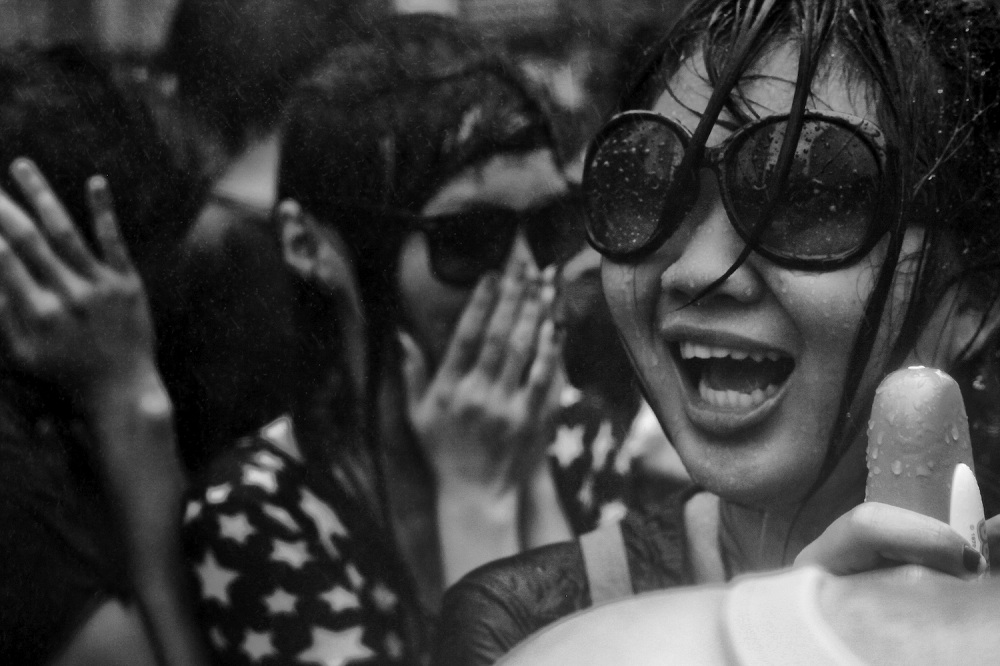 Q: There is mist, water, or liquid droplets in several of your festival images. What’s going on here?

A: I think that liquid water droplets in the pictures are common in the photography of a festival. No one cares that you have a camera in my hand. People around you want to splash water on you at all times. I enjoy taking pictures and making images that reflect the mood of the festival. Sometimes a liquid or blur makes the imagination of those who see it.

Q: Do you think that the sexual, ecstatic, and freewheeling fun aspect of these pictures are a life-affirming counterpart to your flood disaster pictures, and were you conscious of this when shooting these images?

A: Issues of the presentation between the festival and flood disaster are composed of different things to offer. Living in a different time, it will be different. In terms of photography, I like the Songkran Festival in the cultural and religious conflicts of the changes seen in the ancient festival. 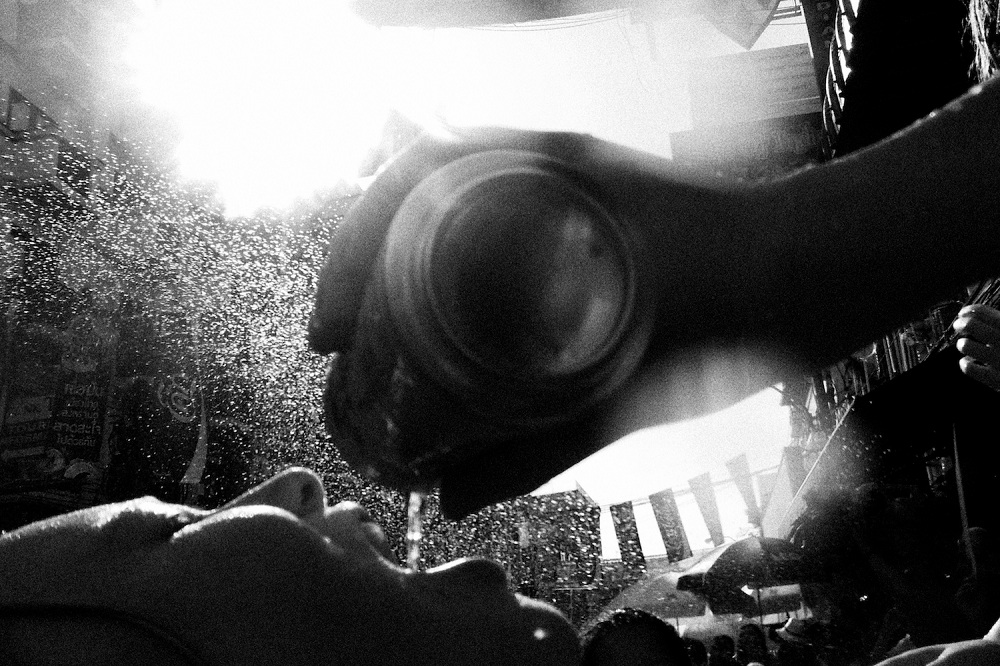 Q: Your graphic picture of a can of beer being poured down the throat of someone lying on his/her back with suspended mist in the background is amazing. How did you come to take this shot and what does it mean to you?

A: In the close-up shot, you need to create a familiarity and trust. A Festival is full of fun and you need to be happy with the people around you. For this photo, I chose a backlight to make dark faces so not be able to identify who she is. I need the background filled with spray to help tell she is drinking and enjoy in celebration. 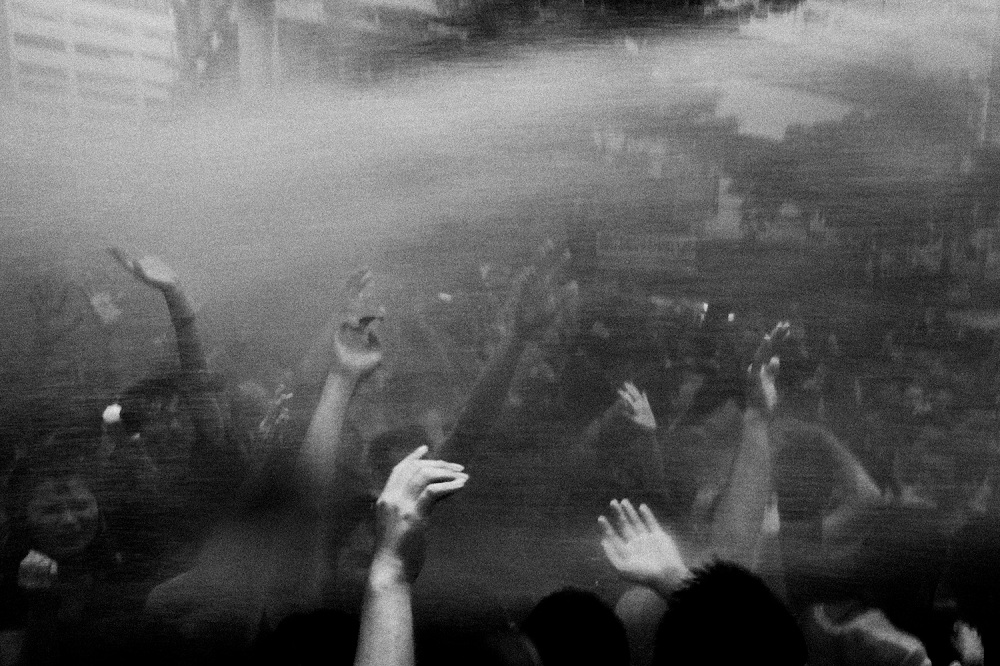 Q: Several of your festival images, notably one of a crowd of hands waving in the air in a sea of mist or fog, are somewhat blurry or even out of focus, but they manage to convey a sense of being there. Do their technically deficiencies bother you, and would you please comment on why you included them in your portfolio?

A: I shot this image at Silom Road during the day. The highlight of Songkran festival in Silom Road is the water from a fire truck. Everyone loves and enjoys being in the midst of the water that is sprayed from the fire truck. I love this image because it’s abstract more so than other images and that’s why I selected this image for my portfolio. I love images that can help us imagine and do not worry about out-of-focus. For me when I see this image, I imagine people in hell, calling for assistants to find escape.

Q: Are there any other events in Thailand or elsewhere that you plan to document in the same vein, or would you alter your photographic approach in any way going forward?

A: I have plans to make a documentary about Thailand’s minorities such as their faith, history, etc. For other events in Thailand, I plan to document about Phuket Vegetarian Festival.

Thank you for your time, Preedee!

You can see more of Preedee’s images on his blog.