The true nature of Manuel Uebler’s evolving quest, both as a photographer and a human being, is a story told best by viewing his timeless images of residents of an old-people’s home, Sadhus, street kids and useful objects with a human connection. In our second interview with Manuel, we dove deeper into his series The Elderly’s Home in Nepal. Here, we take a look at his Sadhu portrait project that communicates the spirituality and depth of these holy men.

Q: There is a great sense of dignity and inner peace conveyed by each and every one of the Sadhu portraits. Why do you think this is so, and was it the underlying reason you decided to show these people in the most straightforward and “artless” way possible?

Dignity and inner peace are invariably joined together. They grow from an inner confidence that is defined through contentment with one’s own nature and not through material possessions. As the Sadhus stand in front of the white background that functions as a stage, a catalyst of their characters, this self-confidence starts to glow in front of the camera. No distracting background, no pose, only the human being, completely unadorned. Straightforward, looking directly at the camera – leaves no space for excuses. One gazes straight into the eyes of their personalities and they seem to timelessly return the look. 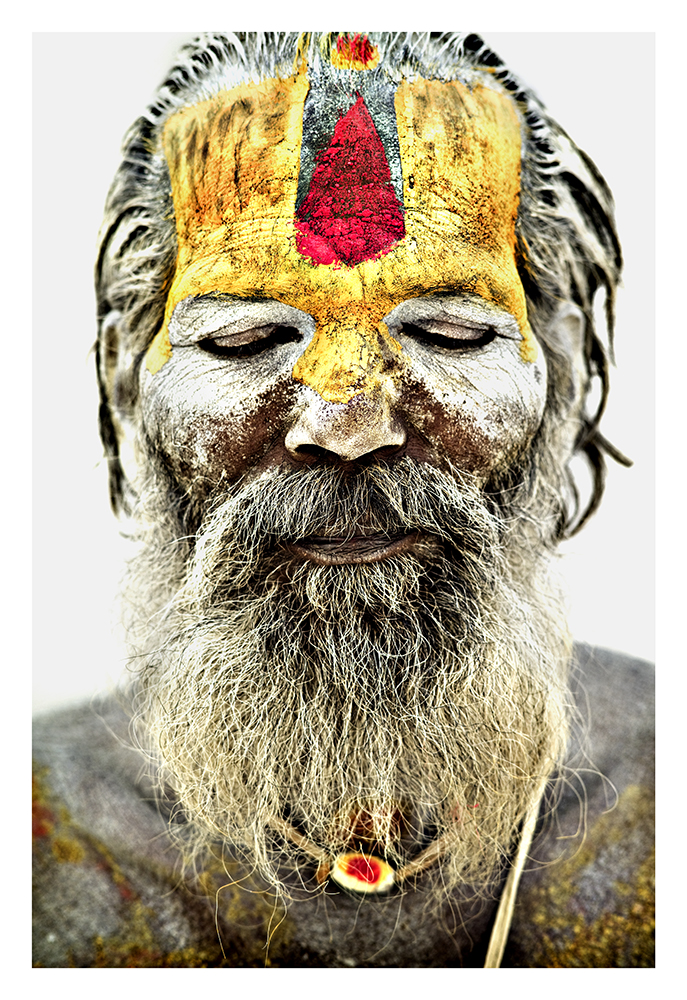 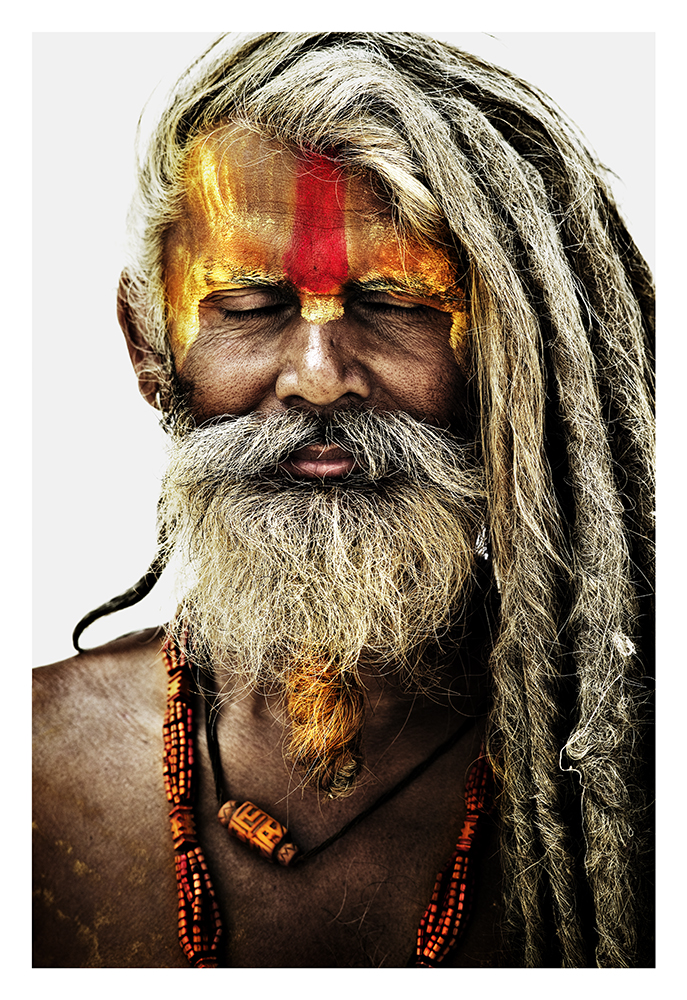 Q: Some of the images in your Sadhu book are portraits of people with their eyes closed, successfully violating one of the cardinal “rules” of portraiture and pointing toward a larger truth. Do you agree, and can you say something about that larger truth.

The Sadhus are holy men that have chosen a special path for their lives in order to come closer to their ultimate goal – to reach nirvana. They are committed to living in complete sexual abstinence. They leave behind housing, possessions, relationships and security. Daily meditation helps them refrain from social needs and resist the temptations of consumption. The illustration with the closed eyes emphasizes the Sadhus’ very introversive philosophy. It reflects their own abstinence while searching for their primal pathway. The great truth lays in the courage to find and walk along one’s very own path of life, free of any fears of loss. Hopefully, this self-confidence will inspire and encourage the viewer to follow his own designation and courageously tread upon new paths.

Q: Color is a very significant element in these images—even those that do not include colorful garments. Why did you make the conscious decision to show the Sadhus in color while all your Elderly’s Home images are output in black-and-white?

A: Along with the strong photo graphics, color is an important aspect of the portrait photography of Sadhus. Color photography distinctly shows the stark contrast between the Sadhus, so visibly drawn by life, and the bright colors of their clothing. This way they are also more clearly set apart from the neutral, light-grey background. The colors of the portraits seem to glow from within. The shades of red and orange have a positive and warming effect on the viewer. Thus, the portrait series generates an especially ceremonial atmosphere and fills the exhibition space with intense emotions.

During the reportage photography at the elderly’s home, the depiction of spirituality is of secondary importance, while the documentary aspect is focused on. I find black-and-white photography more authentic. The faces, the looks are clearer and the emotions can enter deeper into the viewer’s awareness. 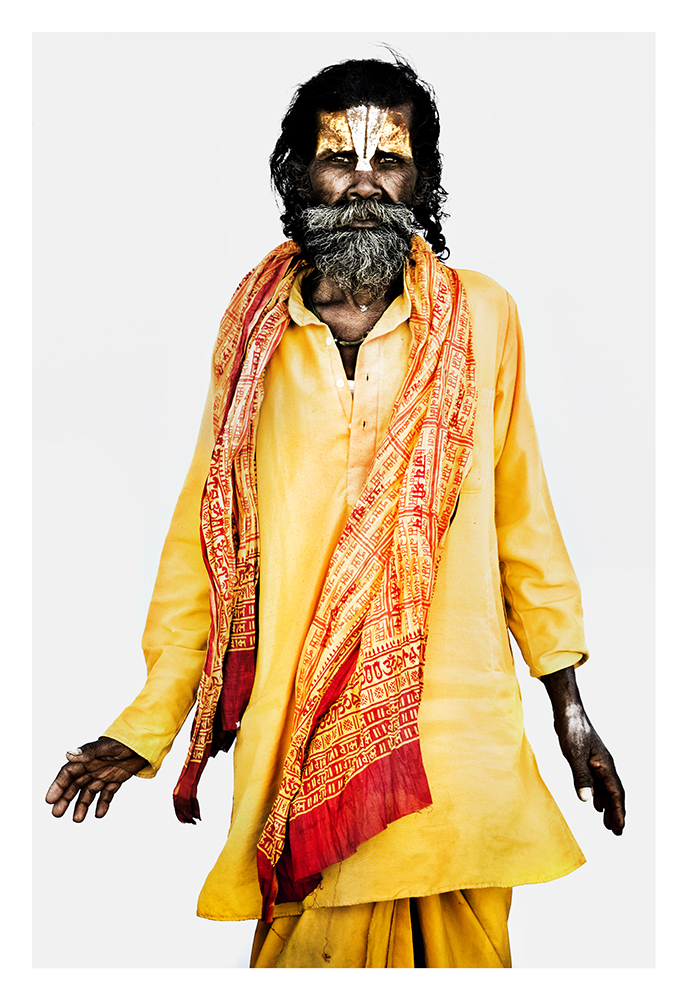 Q: There is only one image of an elderly Sadhu with high right hand raised, palm forward. It is a powerful gesture that makes this portrait especially compelling, but what do you think it means?

Even though at first the way every Sadhu greets seems to be the same, every one of them has his individual gesture. The hand postures, the position of the fingers vary slightly. Mostly Sadhus worship Vishnu, the god of Trinity. He equally symbolizes creation, sustainment and destruction, as in the reincarnation that is imposed on human beings. Vishnu’s symbol is a trident which can often be found in the colors on their faces in a highly abstract form. It was my impression that with their greeting they indicate a connection to Vishnu and identify themselves as Sadhus towards their fellow men. They greet their vis-à-vis open-heartedly and show that they are treading the path of abstinence for them as well. Also, since Sadhus are dependent on donations, it is simply very practical to be recognized as a Sadhu immediately through clothing, hair, colours and gestures. 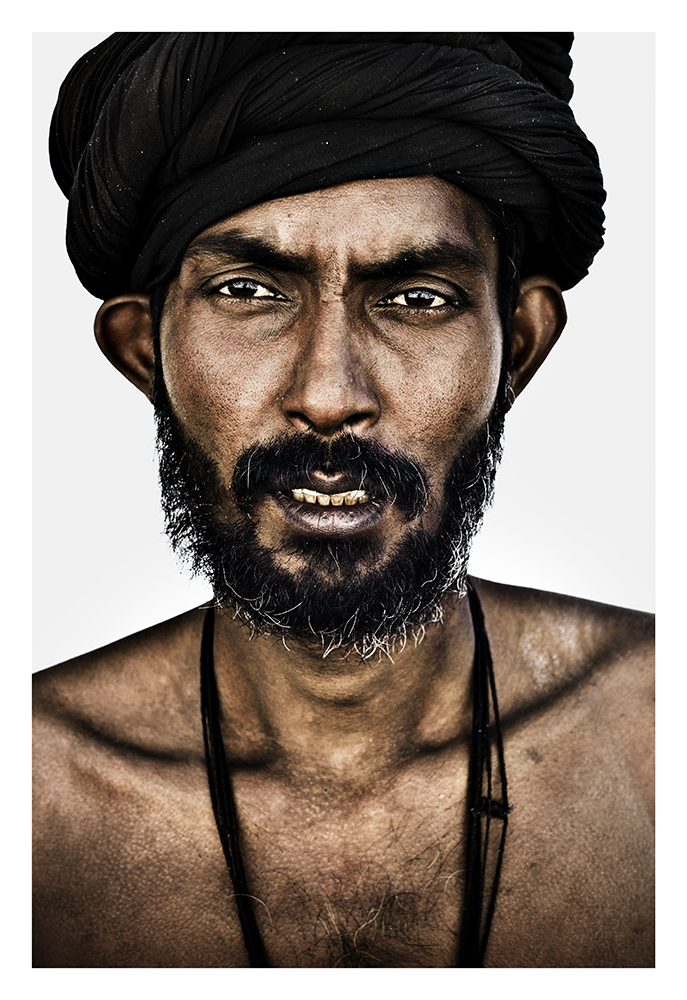 Q: The close-up portrait of a younger Sadhu in a black beard and moustache, wearing a black headdress, and gazing intently into the camera has an almost unbearable intensity, yet in conveys acceptance rather than confrontation. Do you concur, and what can you tell us about this subject?

The photograph shows a Sadhu that made a pilgrimage from northern India to Nepal. Nearly 800 km on foot, or on a cart, or… I can barely imagine how these people can manage such distances under those living conditions.

I often stand in front of this picture and ponder what may be going on inside this man. Acceptance is an integral part of his philosophy. Acceptance and simultaneous abstinence. What is left then is the pure human being. His looks do not have to meet any media conception of beauty, his facial expressions do not need to appeal to anybody – he is just as nature, and not society, created him.

Q: How did you feel after completing the Sadhu project, and what do you think these people taught you about being human?

In my western ways, I went into this portrait series full of expectations. I had prepared a list of questions for the Sadhus. Questions concerning life, war and peace, the true way to humanity, questions about pure happiness. My first attempts to find the great truth lead only to disappointment. The Sadhus offered no opinions, no knowledge and no philosophy. I was completely dumbfounded until I finally understood their model of life. The way they choose to be socially excluded, the way they live without consumerism and security also reflects their spiritual attitude. It is all about abstinence, this also includes abstinence of thoughts and their own opinions. How difficult to imagine for our individualized society! But by the complete suppression of all wants and desires, they manage to overcome many hurdles of reincarnation during their lifetime and advance toward their only goal – reaching nirvana. It is all about the pure being, here and now; not about great thoughts concerning the future. To me, Sadhus are a symbol for the courage to purely be one’s own self. If a man manages to find his personal spiritual goal in life, he can set out onto the grand path that will lead to his own self in the end.

Q: Do you plan to photograph the members of any other spiritual group, such as Buddhist monks, Sufi masters, etc. in a similar way, or perhaps do a follow-up on Sadhus?

A: I’ve completed the Sadhu project after two years of photographic work. I am currently planning several photo series. Religion, culture or social class of the portrayed persons is of no relevance here. I am interested in how their way of living draws and marks the faces, the demeanor and the looks of the portrayed persons. Of course, I want to catch a certain spirit in my series and make it accessible to the viewers of my photographs. The photo series clearly brings out the same characteristics of different individuals and helps emphasize my message. A particular feeling, a special vibe often develops early during the photography work and accompanies me. Then I search for possibilities to include my own feelings into the series and try to enhance them with certain stylistic devices. I am looking forward to new challenges.

Thank you for your time, Manuel!