I love wide-angle lenses. Why settle for reality as we know it, when you can have a wraparound view that’s larger than life. Accompanying this panoramic effect is an increased depth of field. Details become sharply focused across the visual plane. The trick is knowing where and when to use a wide-angle lens. I usually favor my 24mm Summilux-M because it’s suited for a broad range of environments. Yet I generate more keeper photos per outing with my 18mm Super-Elmar-M. I tend to think of the 18mm Super-Elmar-M as the unsung hero among the Leica lenses, because only a small group of camera owners appreciate its full potential.

Each M-series lens has its own character and preferred uses. Need to accentuate the dimensionality of an object or scene? The 18mm Super-Elmar-M can provide a multifaceted view that simultaneously takes in the front and sides of an object, suggesting a depth and bulk that would otherwise be missed with a 21mm or 24mm lens. It can also be subtle and refined, revealing the delicate details that underlie a large structure. Unlike other wide-angle lenses that rely solely on the unusual perspective, the 18mm Super-Elmar-M doesn’t render harshly or have an overly digital feel. When the light is just right, it can capture shimming reflections that a lesser lens might distort or miss entirely.

Even though an 18mm isn’t the best choice for many kinds of shots, I often use it exclusively for a day’s outing. That way, I’m forced to push the limits of what I assume the lens is capable of achieving. Shoot with a wide-angle lens in situations where you think it might fail, and you may find you’re using it in ways that few photographers have explored. If the goal is to produce images that are fresh and innovative, don’t be afraid to take a specialized lens into uncertain territory.

With its maximum f/3.8 aperture, the 18mm Super-Elmar-M is a relatively slow lens, which makes it more difficult to use in low light. On the other hand, because the view is much wider than a standard lens, you can more easily handhold the camera at slower shutter speeds. (The larger field of view makes an object smaller, so that the object moves proportionally less if you can’t hold the camera steady.) I figure I can reduce the shutter speed by a factor of two or three. In other words, if you’re comfortable shooting at 1/90 of a second with a 50mm lens, you should be fine reducing that to 1/45 or 1/30 of a second with an 18mm.

You’ll need an external viewfinder with an M9, unless you can estimate the approximate space beyond the confines of the built-in viewfinder (something I haven’t been able to do). On an M8, it becomes a more versatile 24mm lens. You can use the same Leica 18mm external viewfinder with either camera, as the viewfinder provides both 18mm and 24mm frame lines. I first began shooting the 18mm Super-Elmar-M with an M8.2 and was very happy with both the performance and handling on that camera. 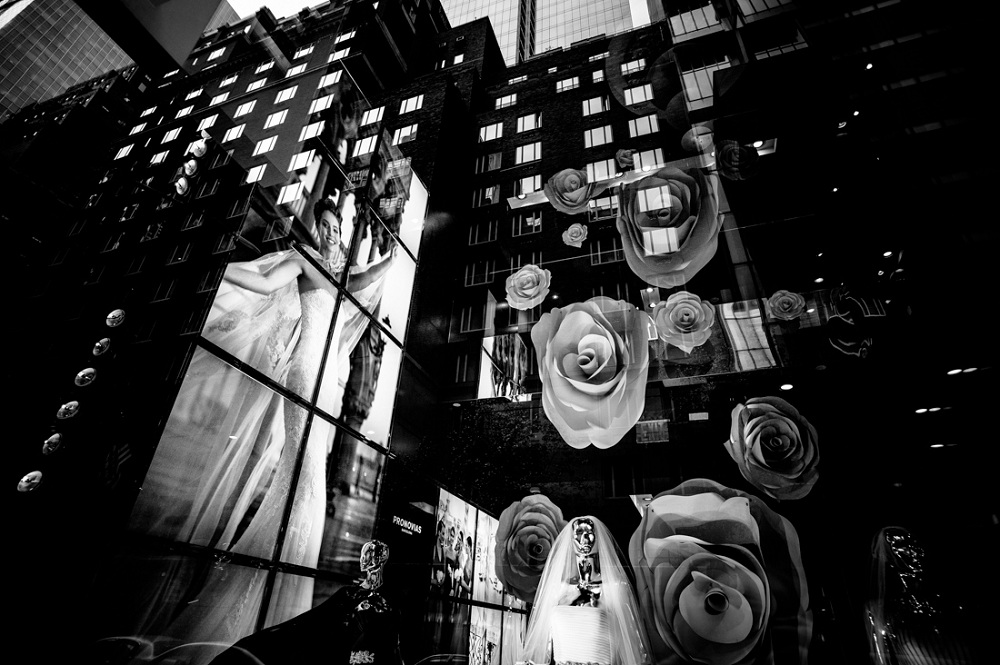 The photo titled Window Display shows how the 18mm Super-Elmar-M can integrate elements that might be missed in real life. You’re seeing a bridal shop with the buildings across the street reflected onto the display window. Because everything is in sharp focus, it all seems to be part of the same focal plane. The wider view gives you a stronger sense of scale. The entire view looks massive, yet oddly intimate, because the objects— whether they’re ten feet away or hundreds of feet away—are seen as inhabiting the same space. 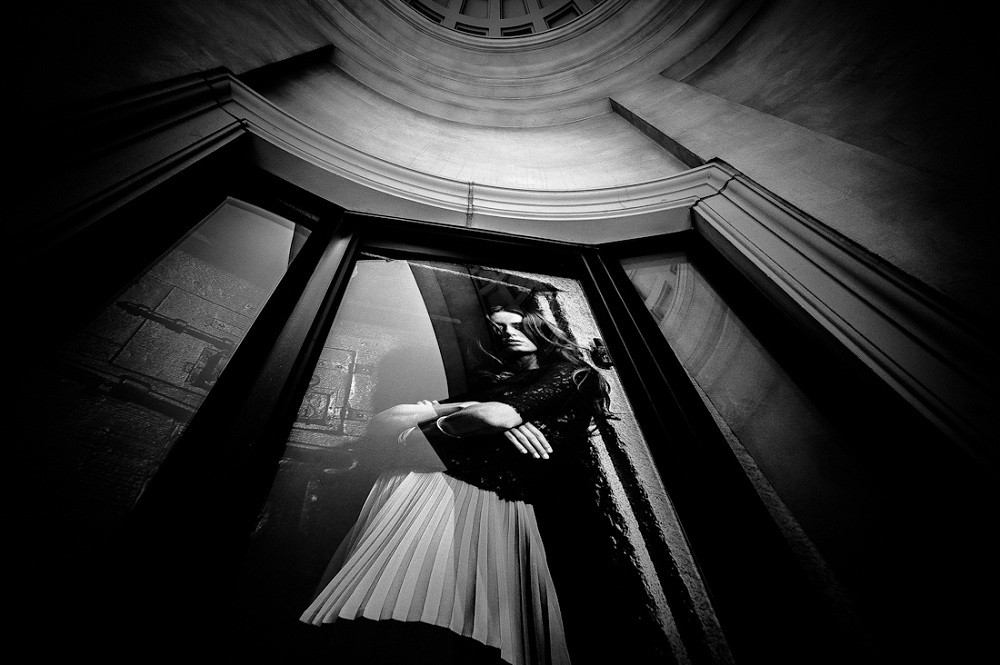 It’s easier to play these kinds of perceptual tricks with a wide-angle lens because the viewer assumes by default that the image is derived from a normal perspective. The photo titled Vegas Sign contains an optical illusion. The 18mm wide-angle view, combined with the shadow across the advertisement, gives the woman almost a three-dimensional look, as though she’s breaking free from the wall. The curved frame above her head emphasizes the effect. 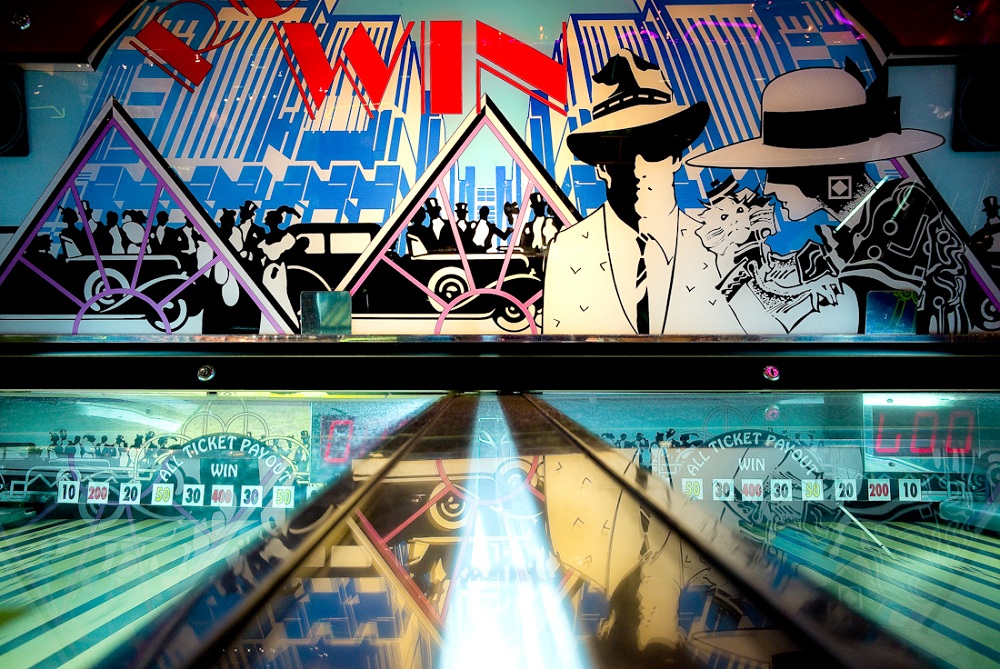 While we tend to associate wide-angle lenses with larger-than-life views shot from a distance, they also work well in close quarters at the inner limit of the focus range. In the case of the 18mm Super-Elmar-M, the minimum focus is 0.7 meters. The photo titled Arcade Game shows the smooth gradations of bokeh that this lens can produce, as well as its ease in rendering illuminated backgrounds. I was able to capture this shot at 1/12 of a second by resting the camera onto the game machine for extra stability. 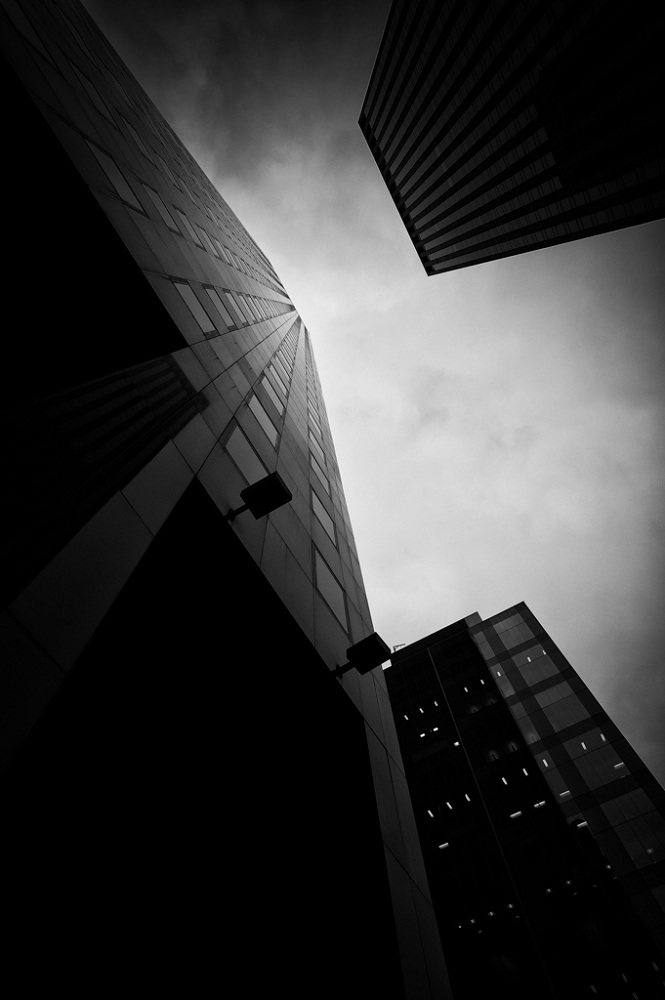 Of course, you can also use the 18mm Super-Elmar-M for classic wide-angle shots. Nothing gives you the same sense of vast space and converging lines than a wide-angle lens. The lines seem as though they could go on forever. With the photo titled Dark Buildings, the converging lines highlight the abstract repetition of the buildings’ windows and lights. You almost feel vertigo as you move from the broad base of the nearby building to its narrow top, which disappears in midair as though swallowed up by the clouds.

Given its moderate price compared to other Leica M-series lenses, I’m surprised the 18mm Super-Elmar-M isn’t found in more three- or four-lens kits. My standard three-lens kit is a 50mm Summilux, 24mm Summilux, and 18mm Super-Elmar. When there’s enough light and the subject matter is a good fit—especially with architecture—it’s my top choice. I’m looking forward to using it with the M Monchrom camera in low-light situations, where I’ll be able to bump up the ISO setting to compensate for the maximum F/3.8 aperture.

This is a guest post by David English, who has a day job as a technology writer. He has written articles for CNET, Film & Video, PC Magazine, Sky and other publications. David started shooting with a Leica camera in March 2009 using an M8.2 and moved to an M9 in November 2009. You can see his photos at protozoid.com. His main website is davidenglish.com, and his classic film blog is classicfilmpreview.com.