David G. SPIELMAN: When Not Performing

David G. SPIELMAN recently released the book When Not Performing that tells the stories behind the music of seventy-one musicians.  The kind of stories that reveal more than what meets the eye or what we hear when they perform. The musicians chose where they wanted to be photographed adding another dimension to their story. Working singularly with his M-6’s and M-9 and very limited lighting, David shot most of the portraits with available light. Below,  in David’s own words, is some background behind his approach and a sample of 5 musicians who were photographed for this project.

These portraits are not of the musicians performing, I just wasn’t interested in seeing another book of musicians on stage. I also don’t bring assistants, lighting grips, make-up artists, etc. to my shoots. I want to photograph my subjects alone, B&W with natural light, without all the distractions and others vying for their attention. My goal is to find the moment when they have answered or asked a question and have relaxed, are listening and are in a thoughtful and personal pose, feeling comfortable and trusting me enough to capture a glimpse of the real them!

As I look at these images and reflect on my work, it becomes very clear that I’m extremely lucky. I’m just an ordinary guy who gets to meet and take pictures of extraordinary people! 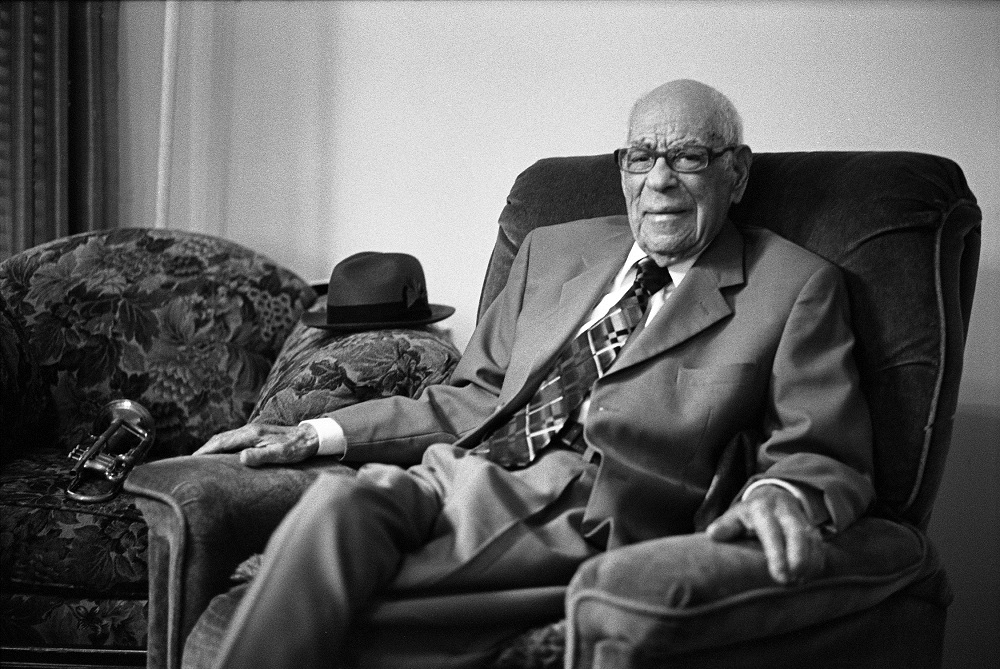 Can you imagine playing a trumpet at 101 years old? How about having a standing gig every Saturday night at the Palm Court Café in the French Quarter? Well, that’s what Lionel Ferbos does. It is extremely hard to tell from his portrait that he is over a century old.

As you can see Mr. Ferbos is of the old school: jazzman, coat, tie, his hat at the ready with his horn nearby. It is incumbent on each musician to play and be sharp, he insists. 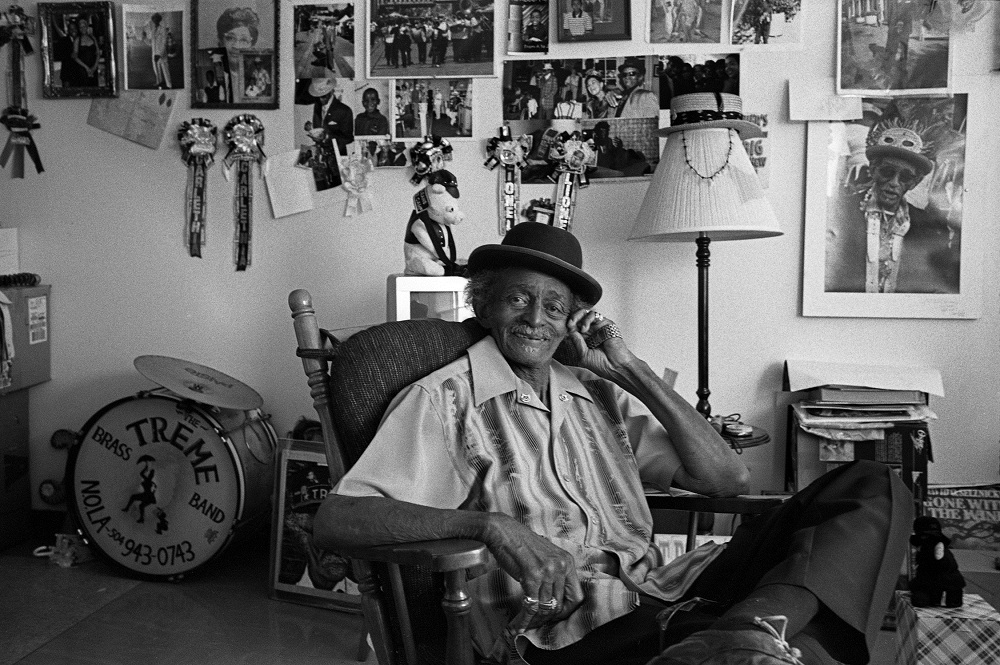 Uncle Lionel passed away on 8 July 2012. Within just a couple of hours of his passing, the streets filled with Brass Bands honoring his life and music. A parading legend, rarely could there be a jazz funeral or second line with out him leading it. Born in the Treme, he was surrounded by street music and the likes of George Lewis, Smiley Lewis and Alphonse Picou. Through his life he paraded with the Tuxedo, Olympia Brass Band and others.

I was told, after our session, that there weren’t any pictures of Uncle Lionel sitting or appearing without his sunglasses, he was always on the move. Rarely will I do a portrait with someone wearing sunglasses, the eyes are a very important and telling part of my pictures. I want to see them. There he was sitting before his memory wall, with a small part of his visual history and memorabilia telling his long musical history. 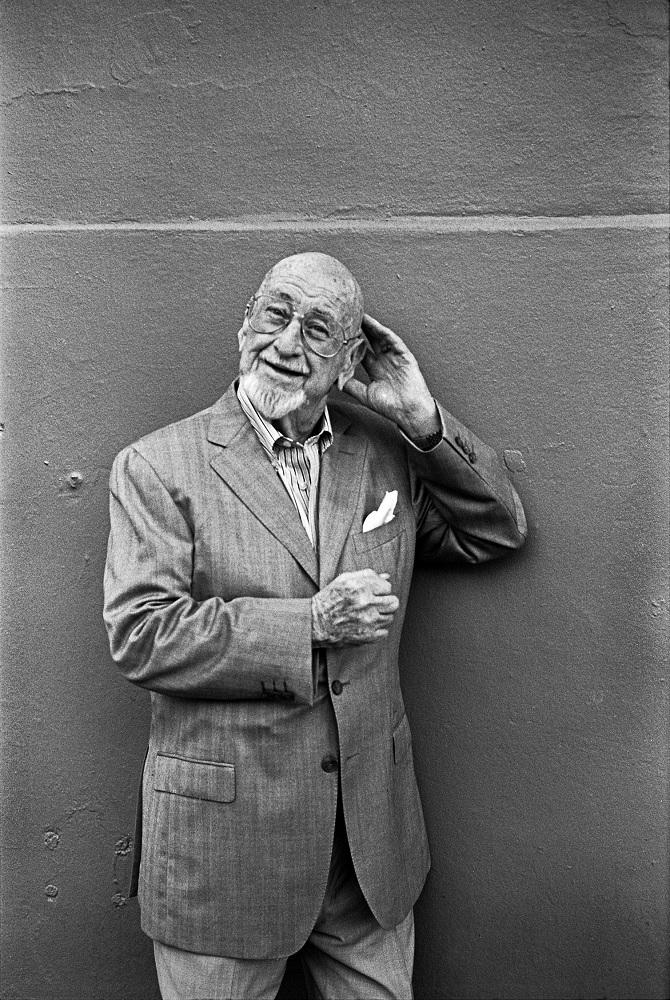 The time that had been scheduled to take clarinetist Pete Fountains’s picture just happened to be on the morning of the funeral for Archbishop Hannan, a long time friend of the musician and a beloved New Orleanian. Pete wanted to have his portrait taken in Pirates Alley next to the St. Louis Cathedral where the funeral was to take place later in the afternoon. The Cathedral was being prepared for the funeral, security barriers were in place, but because Pete is so universally known the police made way for the living musical legend. Standing there talking about his life living and playing in the French Quarter, Pete let me know that he had the most appearances of anyone on Johnny Carson’s Tonight Show. Popes and Presidents were part of his adoring fan base. I then asked his what song did he think the Archbishop would have liked him to play there in the Alley. With no hesitation he said “Do You Know What It Means To Miss New Orleans.” So I asked him would he please break out his clarinet and play it there for me and the Archbishop. Chills still run through me as I remember that day listening to him play and being there in Pirates Alley. When he finished and he was putting away his instrument he said, “Only in this city could a saloon player from the Quarter be an Archbishop’s pal. Isn’t that wonderful.” 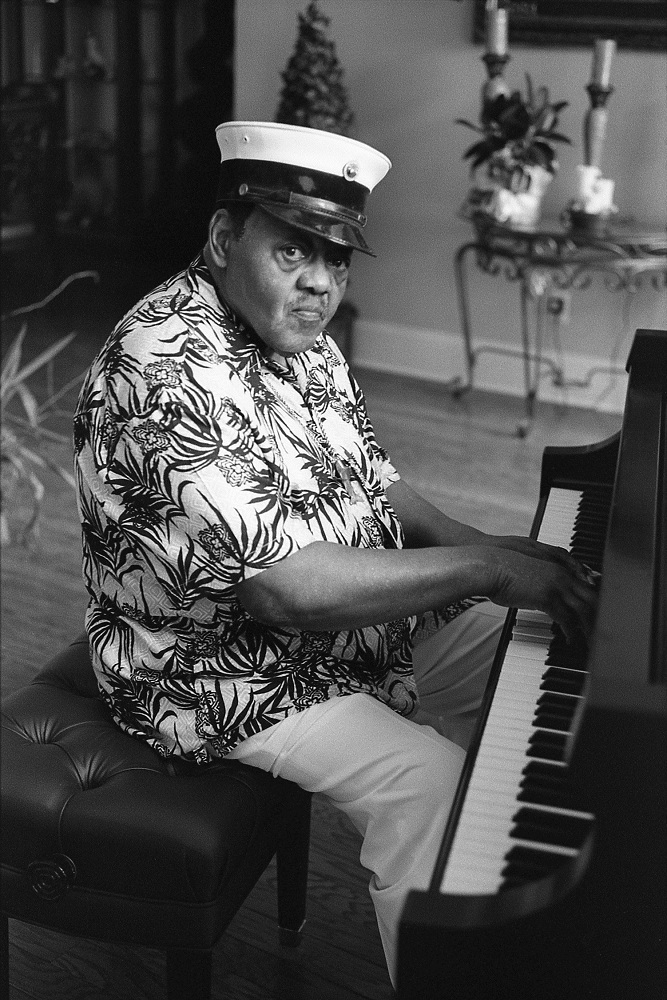 There was a time when he was more famous and sold more records than the Beatles. This young man from New Orleans wasn’t only just singing, he was breaking the color barrier, too. The white radio stations started playing his music, white and black clubs started letting in anyone who wanted to hear and dance to the music. Elvis, the Beatles and countless others were influenced and are still influenced by his talent.

Hurricane Katrina almost washed him away. With the breaking of the levees and extensive flooding Fats’ Lower Ninth Ward home was destroyed. For a time rumors spread that he had drowned.  Luckily for all of us, he didn’t. Living with his daughter he plays often and remembers the history he made. Always expressing his love of the music and those he met and played with along the way. 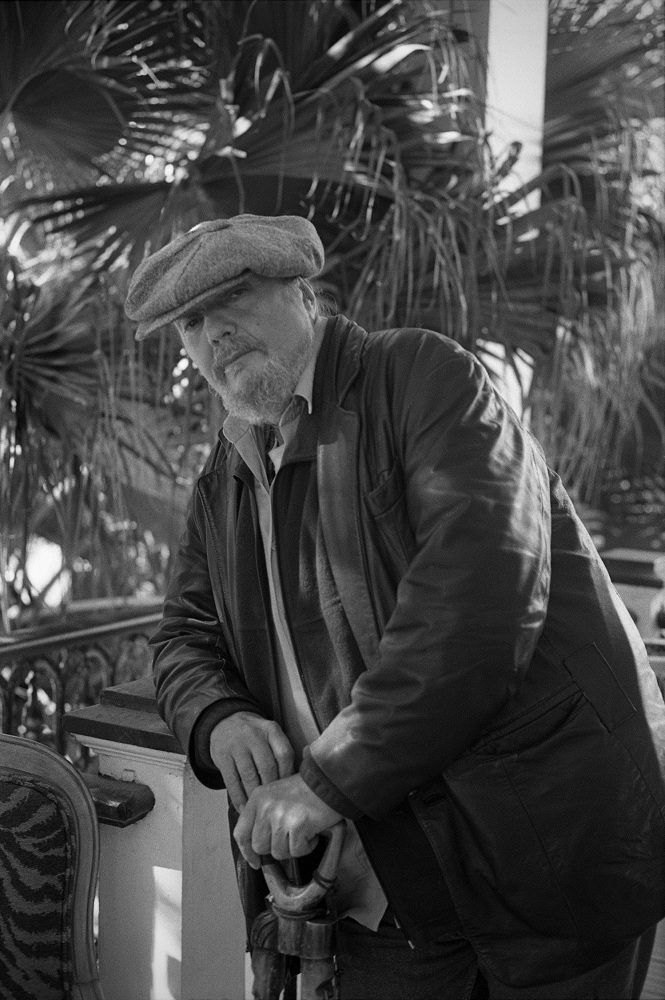 AKA Mac Rebennack, the High Priest of New Orleans music. His career spans a lifetime starting in the late 40’s and continuing until today. With a recent nomination for another Grammy, Dr. John has seen and played it all. Usually seen wearing voodoo headdresses and carrying magic sticks the good Doctor was relaxing at home on a cool January morning enjoying his morning coffee.

Listening to his lyrics you will quickly become aware of the fact that he has created his own language. This only adds to his magical influences on not only other musicians but anyone who has the opportunity to speak with him.